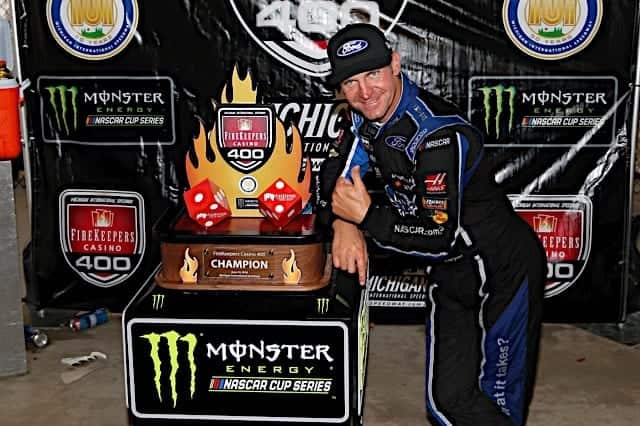 Since when did Michigan become Pocono — aren’t rain-shortened races the pride of the Pennsylvania track?  No matter. So now we head into an off weekend with that race at Michigan being the last memory. No wonder people are concerned about the ratings.

Dreamed we won Michigan! Reality….woke up with a massive hangover on a week long vacation with kids screaming, phone dead, wife pissed, brother outside puking, and can’t find my flip flops. YEP, we must’ve won! ?

How NASCAR isn’t promoting Bowyer like a superstar is downright baffling.  For all the fans that clamor that the sport has become too corporate and that the drivers are as cookie-cutter as the mile-and-a-half tracks that populate the schedule, having a personality like Bowyer sells the sport in ways that so many of the other drivers can’t.

Let’s all hope that no one ever censors Bowyer’s Twitter account.  If they do, all hope is lost. Help us Obi Wan KeBowyer.

Happiness Is… Break.  The Monster Energy NASCAR Cup Series (yes, writing that out is still a laughable matter, like if the sport was trying to go over the top with the way they named itself they didnʻt go far enough) has been racing approximately every weekend since the Philadelphia Eagles won the Super Bowl.  This weekend marks a moment when the series takes a break, giving the drivers a chance to tweet and post on Insta all the fabulous, wonderful, luxurious places that theyʻll be.

The real importance here is that there will be a moment of downtime – save for the poor souls in the Camping World Truck and XFINITY series.  So if you want racing, thereʻs some to be enjoyed. Lest you may forget, this weekend is also the 24 hours of Le Mans, though no Cup drivers will be participating in the event.

Really, however, the Cup Series needs a break.  There needs to be time to digest whatʻs happening and to step back from the cars to reconsider how things are being done.  Perhaps the break will allow some of the teams to figure out better ways to avoid getting caught, errr, building cars that pass all the required inspections.  Perhaps the break will allow some drivers to find something to work with toward making a push toward the playoff.

The hope of finding the secret to on-track passing is not going to come in a one-week break, so you can forget that idea.  When the Cup Series returns, however, the dreaded aero-whatever wonʻt be the factor it is elsewhere as the next race is on the road course in Sonoma, California.  That aspect alone is enough to enjoy this Cup break while being eager to see the next race.

Happiness Is… Vettel.  Most everyone thought that Mercedes had things in hand for the Canadian Grand Prix this past weekend.  Lewis Hamilton had won six times at the Montreal track and even though Mercedes has shown lapses in their dominance this year, they are still considered to have the engine with the most straight-line speed, something that should have been an advantage at Circuit Gilles Villeneuve.

Ferrari was having none of it.  While the Prancing Horse has come close to matching the speed of their competitor it is with superior handling and better tyre wear that they have come alive.  While Red Bullʻs Max Verstappen may have dominated the practice sessions, Sebastian Vettel put his car to work during qualifying and made it look like Ferrari may have been sandbagging a touch through the earlier part of the weekend.

When it came to race time, Sebastian Vettel pipped the start and cruised from there out.  Valtteri Bottas could never challenge Vettel and was forced to drive his own race of trying to manage the second-place finish.  Vettel, however, looked like he barely worked – and thatʻs great.

The reason thatʻs great is because the past four years have been all Mercedes.  Red Bull and Ferrari have stolen a win here and there but theyʻve not been up to the challenge of truly making a full-season run at the Silver Arrows, hence Hamilton and Nico Rosberg had little to fight other than themselves.  Formula 1 now has a title fight, both for the driverʻs and the constructorʻs titles, something that hasnʻt happened in quite a while. For a series that has increasingly received criticism regarding the on-track product and whether or not it is competitive, this season is turning out to be a much-needed and welcomed change.

Happiness Is… Dixon.  Some drivers donʻt care for an egregious amount of media coverage.  Some prefer to keep themselves out of the limelight, saving it for their racing.  The good ones become methodical and they earn top 10s with such relative ease that it becomes commonplace and overlooked.  They throw in wins, remain relevant, and usually contend for championships. In NASCAR, Matt Kenseth comes to mind; in Formula 1, perhaps a driver like Rubens Barrichello.  In IndyCar, Scott Dixon epitomizes this kind of career.

The only difference between Dixon and the others is that heʻs really flipping good.  Heʻs got four championships, two Indianapolis 500 victories, and is now third all-time in IndyCar wins with 43.  Thatʻs a stupid-good resume. And yet heʻs a guy that you could pass at the mall and never much consider anything.

His casual charm makes his success all the more endearing and at this stage of his career, at age 37, heʻs leading the 2018 title charge and is likely to add to his extraordinary statistics before calling it quits.  That means that he can only continue to add to the notion that heʻs one of the best drivers ever – that most people forget about.

“Perhaps the break will allow some of the teams to figure out better ways to avoid getting caught, errr, building cars that pass all the required inspections.”

It is refreshing to see Mercedes having to really fight this year, its long overdue. Yet in the past few years the real difference seemed to be that the other teams couldn’t match Mercedes pace of development as the year went on. Will this year be any different? Supposedly they had a new engine upgrade that was supposed to be introduced at Canada but wasn’t.