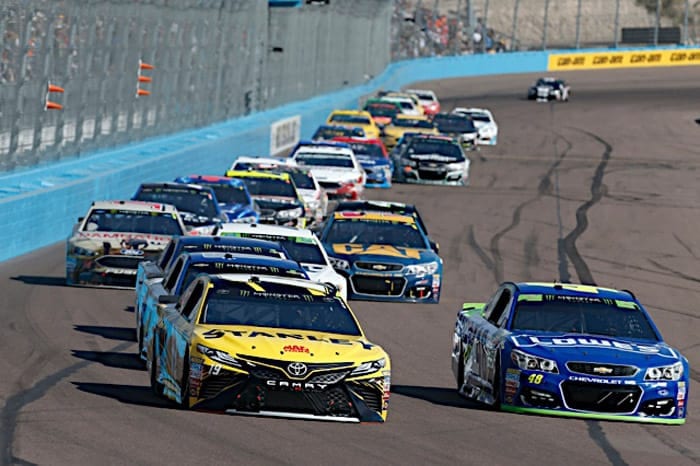 1. Can Chevrolet turn it around?

Or maybe, more accurately, will it?  Certainly, it can; there’s a reason Chevrolet has so many manufacturer titles in the sport. And really, it’s showing signs of life after months of slumping. Kyle Larson has run with the leaders just about everywhere, and one of these days, his atrocious luck will turn around.  The No. 42 team could easily have a win or two already if things went their way.

The last couple of races have also seen a drastic improvement from Jimmie Johnson. He’s had top-10 cars, and with that, he’s shown he has the confidence to race them the way he always has, getting every ounce of speed and maybe a couple that aren’t there. Chase Elliott is top-10 material most weeks as well.

Remember that last year with its new package, Toyota had limited success until midsummer.  Eventual champion Martin Truex Jr. had a couple of wins, but the entire Joe Gibbs Racing camp was winless until the summer race at Loudon, 19 races into the year.  Compare that with 2018, and there are parallels. Larson has been fast all year, and the others, most notably the Hendrick Motorsports camp, are starting to heat up with the summer.

The official line is that NASCAR doesn’t want fans to leave the track having seen a race winner, only to get home and find out they didn’t win after all.  Perhaps there was a time when this concept was a fair assessment.  Fans didn’t have instant access to news via the Internet, and NASCAR didn’t have the R&D Center where it could completely tear down the winning car.

But times have changed.  If the winning car failed post-race tech, fans would know by the time they got home, possibly before they left the parking lot. Even if a violation was found the next day by NASCAR at R&D, most fans are knowledgeable enough to understand what happened and accept the penalty.

Looking back, NASCAR has stripped wins before, though none recently.  It has in more recent memory taken finishing positions from non-winners for yellow-line violations at Daytona International Speedway and Talladega Superspeedway. That in itself is a far more subjective rule than the car specs.  The shame of celebrating in Victory Lane only to have the trophy taken away and handed to the next guy in line with a legal car should act as a bigger deterrent than any points fine or even missing the playoffs, a la Joey Logano last season.  There’s no reason to award a win to a car that’s not legal after a race in this day and age, and it’s high time NASCAR starts making sure the winner raced a car that’s within the rules.

3. Can the racing be fixed?

If by that you mean “can the racing ever be made to satisfy everyone?” then the answer is no.  Fans who want authentic racing and who don’t mind letting it play out, even if the margin of victory is large won’t be satisfied with a solution that causes more wrecks or closes up the field artificially.  Fans who want cars to run side-by-side all day long and occasionally crash won’t be satisfied with long green-flag runs where the leader can get away.

But beyond that, the racing can be better in terms of competition without losing authenticity.  Letting teams have more choices on gears and suspensions, finding ways to bring mechanical grip into play rather than aerodynamic grip, making it possible for a faster car to pass the leader — all of that can be improved for sure. NASCAR is trying to do that the best they can.

Can NASCAR make it so clean air up front doesn’t matter?  Not unless it can alter the laws of physics to suit them.  The reason the cars don’t cut through the air the same way they did in 1984 is simple: cars aren’t shaped like they were in 1984.  Even if the bodies of today’s racecars had to fit the street templates (and they should), they wouldn’t race like they did back in the day. And not every race was great then, either; just like now, there were barnburners and there were yawners.

NASCAR has a lot of work to do, and there are a lot of areas to be tested. There is no way these improvements can be an overnight process or even a single offseason adjustment. There are so many factors to consider, decisions to make on what to keep or discard.  Tires are different from the old days and NASCAR races on different tracks.

Can the racing be improved?  Absolutely, it can.  Will NASCAR satisfy everyone, no matter what it does?  Absolutely not.

4. Can you accurately compare anything over time?

A lot of debate these days centers around comparisons. Is Johnson the greatest driver ever?  Was Dale Earnhardt?  Richard Petty?  Someone else? Does Kyle Busch’s win total stack up by including his lower series wins?

These questions don’t really have answers, because the reality is that they can’t be compared.  Petty won 200 times at the sport’s top level along with his seven titles.  Earnhardt won his seven with an entirely different points system than Petty’s earlier championships.  Johnson’s came with different rules still, and in an era where there were more teams capable of winning than perhaps other years.  Busch’s wins came across different divisions but also in better-funded cars than a lot of that competition. Petty’s were all at the top level but in an era where many teams didn’t run every race and the competition could be slim.

In short, the sport has changed so much that comparisons simply cannot be accurate.  It isn’t like a stick-and-ball sport where a few rules may change but the ball itself is pretty much the same.  Cars are constantly evolving, manufacturers enter and leave the sport, teams do the same. Drivers are given less time to prove themselves and teams have more equipment at their disposal than teams decades ago could have dreamed of.

Every driver and every accomplishment is something to be taken for what it is; nothing more, nothing less.  Trying to inflate it or diminish it with comparisons is inaccurate and unnecessary.  It’s all special; take it for what it is and was.

There’s been a big push for more short tracks in NASCAR, the latest coming from a track itself. Memphis International Raceway this week made a push for a return to the Camping World Truck and XFINITY series schedule.  It’s a great idea, particularly to bring those series back to what they were intended to be. Non-companion races would naturally cut out the Cup drivers in many cases. Another short track here and there would benefit the Cup Series as well.

But does that mean bringing back North Wilkesboro Speedway and 1-mile Rockingham Speedway?  Sorry, but that ship has sailed.  Neither track has the infrastructure for a current Cup race, and North Wilkesboro is crumbling rapidly; a complete overhaul would be necessary.  It could be done, at a cost, but would it be worth someone’s while?

Rockingham tried, and the fans failed.  Had the stands been packed to the rafters for the Truck Series, perhaps NASCAR could have worked with the track on the future and improvements made so that bigger races could have returned, but they weren’t.  Wanting more short tracks is one thing, but supporting them by showing up, or at least by better TV ratings is something fans haven’t been willing to do when given the opportunity.

Full stands and higher ratings at these types of tracks might show NASCAR fans are serious about schedule changes.  If that doesn’t change, though, what’s NASCAR’s incentive?

With the dwindling ‘crowds’ attending races these days, how valid is the lack of amenities or infrastructure as an argument for not reviving The Rock again?

so tired of people comparing NASCAR to “stick-and-ball” sports….geez…

They are two completely different animals that don’t warrant any comparison at all, IMHO.

A yankee living in North Carolina has the temerity to dictate the fate of North Wilkeboro and Rockingham? It’s bad enough we have our own homegrown scalawags.

The biggest mystery is why Brian is still making decisions about his “product.”

“Even if the bodies of today’s racecars had to fit the street templates (AND THEY SHOULD), they wouldn’t race like they did back in the day.”

This is what I want

NASCAR’s number one priority should be to work with the team and manufacturers to completely redesign the rules package and have a new car in few years that is built for low-downforce/better mechanical grip from the ground up. The Gen-6 car is still a COT under the body and was designed to make 2000+ lbs of downforce. They can only do so much tweaking the spoiler and splitter.

NASCAR should do one of two things. Either make the cars bodies match their street counterparts, or they can scratch the “stock car” from the series, and call them by a different name, such as super modifieds, late models, or whatever, because these NASCAR stock cars are about as stock as John Force’s ride in NHRA.

I am curious about penalties. It seems we have them each week in NASCAR. Team violate the rules to get an edge. I don’t know the last time I heard about such penalties in IndyCar? Am I just not hearing it or do the teams just do a better job of staying within the lines in IndyCar

NASCAR should dump the templates, the mid-week inspections, and the entire idea of parity. And no team should ever be penalized for “infractions” which are not proven to be performance-enhancing. The great mystery is why anybody takes NASCAR’s rules seriously!