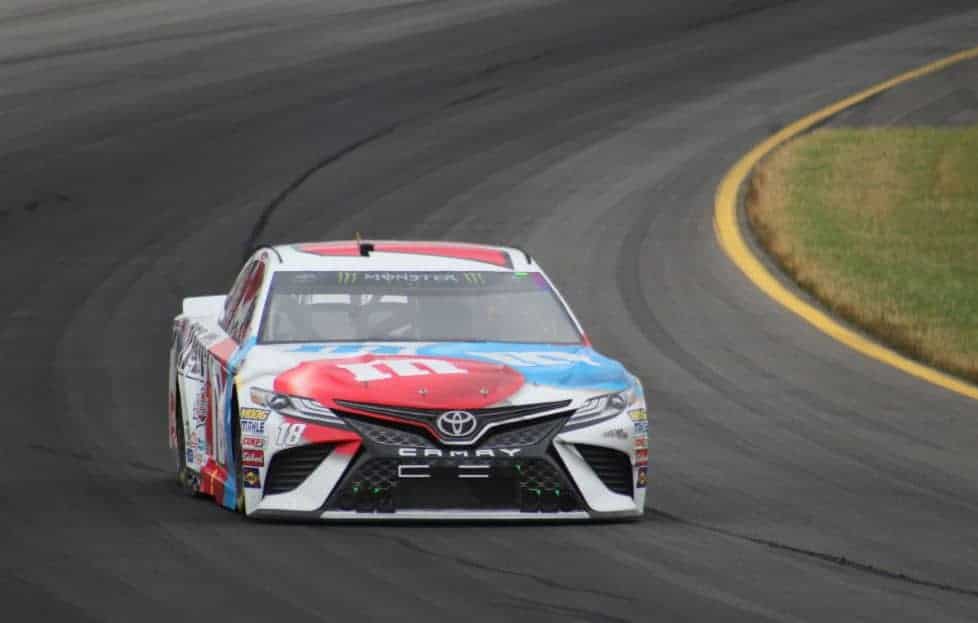 Last July, Kyle Busch finally checked Pocono Raceway off his bucket list of tracks he had never won at in the Cup Series. But in Sunday’s (June 3) Pocono 400, Busch saw the victory slip away.

He began the event from the fifth position, immediately rocketing up the leaderboard to pass Ryan Blaney on lap 12 to grab the runner-up spot, slotting in behind Kevin Harvick. But as the stage wound down, the No. 18 turned to “junk.” That’s even though Busch still ended up third, earning eight stage points.

The second stage was much of the same. Busch finished stage two in second, watching rival Harvick get the win and a playoff point.

But on Lap 127, Busch’s pit crew provided an opportunity. A fast stop gave him the lead, one he held on a restart as the No. 18 paced the field for the next 13 laps. However, a piece of aluminum flew off the back of Joe Gibbs Racing teammate Daniel Suarez’s car, bringing out a yellow that ultimately ruined his chance to win.

“There was a caution in turn 1 for what looked to me to be a shoe booty,” Busch explained after the Pocono 400. “Somebody took their booty off, I guess and chucked it out their window.  That was kind of weird that we saw a caution for that, but safety comes first so that just kind of derailed our strategy.”

Following the race, runner-up finisher Kyle Larson confirmed that it was indeed a piece of metal; the No. 42 car hit it.

During the caution, Busch’s crew chief Adam Stevens called him to pit road while Harvick, Martin Truex Jr., Chase Elliott and Larson stayed out. The No. 18 restarted in eighth, but within one lap soared to fourth. It looked like Busch might have a shot at more, but that’s about where the car stalled out.

“Just really a crazy situation there with how all that kind of transpired and went down, but we fought hard for the finish and tried to get the most out of what we could there and just couldn’t pass,” Busch said. “It was a little disappointing that the tires didn’t mean anything more than they did there at the end with guys that had 10, 11 laps on their tires and they were able to still outrun us and beat us for us having fresher rubber. Clean air was king.”

For the final two restarts, Busch restarted from the inside line, which was a distinct disadvantage all weekend long. He mentioned that it’s common ground for the inside line to be terrible at the Tricky Triangle.

“You know, when you’re on the outside, the leader typically chooses the outside for the launch and to get going,” he elaborated. “And he can control the guy on his inside and not get in a bad aero spot so that just makes that lane accelerate just that instant sooner, and that momentum just kind of rolls.”

Busch was coming off a dominating performance in the Coca-Cola 600, leading 377 of 400 laps (565.5 miles). On Sunday, he was left to settle for a third-place finish but easily retained his points lead over new second-place man Harvick.

The series now heads to Michigan International Speedway next weekend (June 10), where the No. 18 team hasn’t had a top-five effort since 2013.