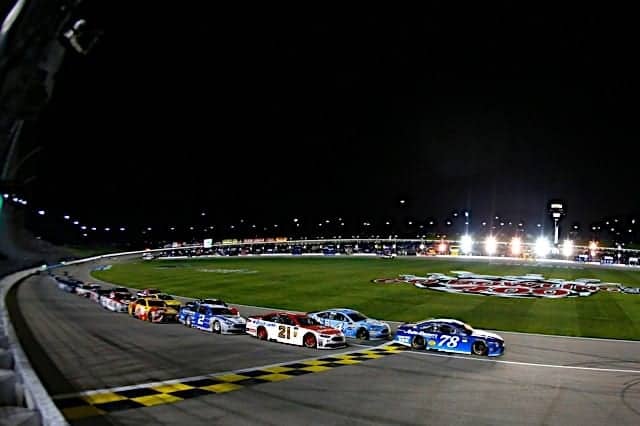 Now that individual states have the ability to legalize sports betting, it is anticipated that most sporting leagues will want to get in on the action. Undoubtedly, NASCAR will be among them largely because the revenue involved is could be a serious boon for the sport.

But would betting windows at the track lead to more TV viewers or fans in the seats?

Don’t bet on it

Odds are, it probably won’t. At least, not at first.

This isn’t horse racing. There are dozens more race cars on a NASCAR track than there are horses in a horse race. More participants mean more possible winners, which in turn means a greater degree of difficulty.

Why does that matter? Don’t get confused here. The involvement by casual gamblers will be minimal at best. The situation created by this week’s ruling will likely bring more professional bettors than amateurs to the window.

Pro bettors in horse racing play the odds. They don’t necessarily know the ins and outs of the competition. They base their decisions based on investment versus the potential return.

That’s a lot harder to do when there are nearly 40 possible winners. Even though less than half of that amount could be considered realistic possibilities, it still adds to the level of difficulty for the casual observer.

Throw in the restrictor-plate tracks and suddenly determining each driver’s odds to win becomes quite the chore.

When someone is throwing big bucks around anticipating certain outcomes of any sporting event, unpredictability is the enemy. A suddenly level playing field is the last thing that a betting pro wants to deal with.

For example, Jimmie Johnson is statistically the best driver ever at Dover. So if a bettor were looking to make a wager on the race at Dover, Johnson would immediately be viewed as a favorite. But based on the performance of Johnson and his No. 48 team thus far in the season, he shouldn’t be the favorite for anything. This situation would likely be unknown for a gambler who doesn’t follow the sport week in and week out.

Then, imagine the same person comes to Daytona to make a wager. Chances are the odds on a Johnson win are much different than they were at Dover.

Once again, for someone who isn’t well versed in the sport, that isn’t going to make a whole lot of sense. Again, comparing it to horse racing, a group of horses is likely still going to have the same or similar odds from one track to another.

I simply can’t anticipate that many people will be willing to put in the time to follow the goings on throughout the season simply because they want to be able to place bets on the outcome.

There’s a notion that this could be the turnaround NASCAR needs to get back to a position of national relevance. But I wouldn’t bet the farm just yet.  – Frank Velat

Upping the Ante with More Horsepower

NASCAR and gambling are going to go together like peas and carrots, and that beautiful relationship will draw more fans to the stands and eyes to the TV. Obviously, the change won’t make it so that its the highest-rated sport or sell out all of the seats, but it will certainly garner the sport more attention.

Gambling embodies the same spirit of NASCAR’s origins. I’d bet that a bunch of good ole boys running moonshine and working in a garage all week would’ve placed wagers on races back in the day. Whether you like gambling or not, you’ve got to admit that there is something about it being associated with NASCAR that just feels right.

Race fans love when drivers go for “checkers or wrecker” or try to win on a fuel mileage gamble — isn’t “going all in” the original incarnation of those adrenaline rushes? Having gambling in the sport might draw back in some people that have felt pushed away by NASCAR in recent years.

By adding gambling, fans will be more invested, literally and mentally, in the sport. One of NASCAR’s struggles right now is that it is trying to develop new beginnings after having so many legends retire the last few seasons. Many fans have been left without a driver to root for, which can cause apathy toward the races.

An integral piece of advice I received when I first started going to local races where I often didn’t know anyone entered was to pick someone to root for in every race I watch and I will care much more about the race as a result. By betting on a race, fans will definitely have someone to root for, and whether or not that driver wins, the fan that bets on them will have an emotional response to the race, whether good or bad.

Adding gambling will also attract people that don’t know or care about NASCAR. Of the thousands of people that go to the Kentucky Derby, how many do you think actually care about horse racing or know a thing about horses? I’d wager that quite a lot don’t for either. I would go to the Kentucky Derby, and the only reason I would care anything about it is because I would put money on one of the horses.

Betting is a huge draw for anything. Imagine if someone opened a casino that had all of the card games and machines, but there was no betting; it was all for fun. That place would tank quicker than an All-Star Race gimmick.

The betting wouldn’t just help the attendance, but it would increase the number of people following along at home. For example, I don’t really follow the PGA or the NBA, but whenever FanDuel has a free contest for those sports then I’ll do a lineup because I could potentially win something. With myself invested into those lineups, I’m much more likely to turn on the golf tournament or the basketball game on TV and follow along because I’m invested into the contest.

And that’s just for a free entry; if I put in money for a sporting event, no matter how little I cared about the event, I would do all kinds of research and follow along. I know people that bet money on nearly every sporting event. If they can gamble on NASCAR, then they will absolutely do that as well, even if they’ve never watched a race.

If the average gambler puts in the research and observes the sport to the degree that I mentioned, then they will get to know NASCAR more and might even fall in love with it.

While integrating gambling into NASCAR will not create millions of fans, it will definitely produce an amount worth mentioning.  -Michael Massie

“If the average gambler puts in the research and observes the sport to the degree that I mentioned, then they will get to know NASCAR more and might even fall in love with it.”

You are kidding, right?

IMHO this is just another case of hoping that the miracle to save nascar has been found. People arent going to attend a race or even watch on tv because of betting. Those that want to bet on nascar already are, legal or otherwise.
Sorry not happening.

Another useless straw to grab at.

And of the aforementioned sports, the biggest betting draw is the NFL which is also the biggest fan draw, and the two are not even remotely related. Betting on football is done off-site and has no effect on game attendance. The ignorance of the FS staff never ceases to amaze me.

Gambling. A fool and his money are soon parted.