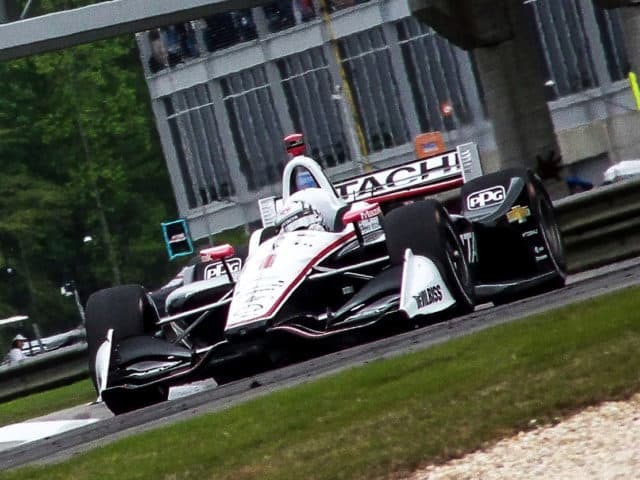 Rain was in the area of the Barber Motorsports Park on Monday (April 23) for the IndyCar Series, and Josef Newgarden and Co.’s call to come down pit road earlier than everyone else for rain tires ended up being the winning call.

Rain threw a wrench in many drivers’ plans for the completion of the race, which was originally scheduled for Sunday (April 22). Newgarden started on the pole on Sunday and continued Monday as the race leader after a two-hour rain delay moved the remainder of the event to the following day.

The race began under dry conditions, but just as time began ticking toward the end, Mother Nature returned. Newgarden had earned a big lead as dark clouds began to creep over the facility in turns 15 and 16.

He then pitted for rain tires on lap 71, surrendering the lead to Sebastien Bourdais. Those dark clouds led to a heavy rain shower, and as track conditions became more and more perilous, Bourdais had to come down pit road for rain tires himself.

Once Bourdais came down pit road, no one had anything for Newgarden, and he crossed the finish line 9.9607 seconds ahead of Ryan Hunter-Reay. James Hinchcliffe finished third, while Robert Wickens and Bourdais rounded out the top five.

RESULTS FROM THE HONDA INDY GRAND PRIX OF ALABAMA

The victory was Newgarden’s second of the 2018 season, third at Barber Motorsports Park and ninth of his career. He also picks up Team Penske’s 199th victory in IndyCar history.

With the win, Newgarden takes the points lead from Alexander Rossi, with a 13-point advantage as the series heads to Indianapolis Motor Speedway.

Looks like Wickens is the real deal. Let’s see how he does at Indy.

I agree. Can’t wait for Indy. Next question. After watching 2 days of IRL, why can’t the best drivers in the world ( NASCAR ) run rain tires at road courses and short tracks?

You DID see that the race was rained out after 23 laps on Sunday, didn’t you? No one could see because of the rain. That’s why you don’t race when it’s raining.

YEP spot! I saw them run in the rain on Sunday till it became a flood and finish in the rain on Monday. They had an accelerator and brakes and rain tires and enough talent to make it work. Very entertaining.