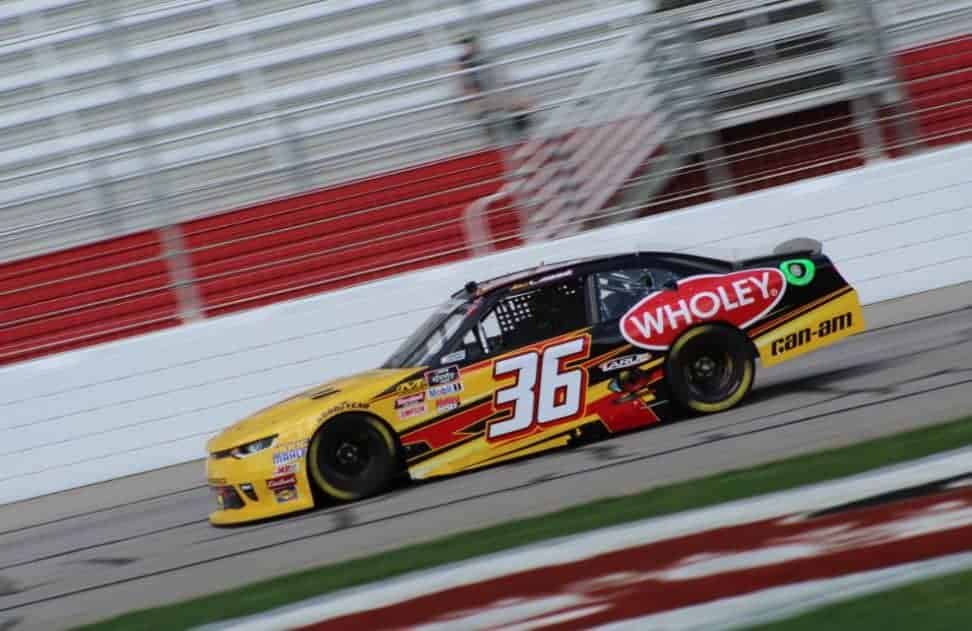 Prior to the NASCAR XFINITY Series season-opening race at Daytona International Speedway, fans may not have known the name Alex Labbé. Five races and three top-20 finishes later, he still might be unknown to some, but the rookie is doing his best to change that.

Labbé, 24, is competing for Mario Gosselin’s DGM Racing, formerly known as King Autosport. In 2017, the Canadian driver competed in a pair of XFINITY races, in addition to capturing the NASCAR Pinty’s Series championship, winning five of 13 races.

The move to the XFINITY Series, skipping the Camping World Truck Series, was partially because sponsor Can-Am vowed it would move him up the ladder if he were to win the Pinty’s Series championship.

“That’s what we talked with my sponsors about – if we won the championship in Canada last year then we were going to run the XFINITY Series,” Labbé said. “I can’t believe it. They were behind me for the past two seasons in Canada, and they made a promise that it would happen. It put a little bit of pressure on me, hoping that we would have a really successful year and we did – we had five wins and dominated a lot.”

Labbé is tied with Jeremy Clements for 15th in the championship standings, just one point behind JR Motorsports driver Michael Annett through five races into his rookie season. Currently, Kaz Grala holds the final playoff position in 12th, 34 markers ahead of the No. 36 team.

However, Labbé never competed at four of the five venues prior to the start of the season. He made his series debut in 2016, finishing 23rd at ISM Raceway outside of Phoenix, but this year bettered that with a 22nd. The No. 36 crew has posted a best finish of 17th this year, coming at Las Vegas Motor Speedway.

“Our job this year is to try to challenge some of the cars in the top 15 to top 18. We finished 17th, 18th and 19th, so that’s pretty much where we want to be,” Labbé said. “The next step is really tough, even when sometimes we are pretty close, it’s another big step. I think we’re going the right way for sure.”

On the west coast swing, which is tough for smaller organizations, the No. 36 team used the same racecar from Vegas as it did this past weekend at Auto Club Speedway. At ISM Raceway, it used one of its short track machines.

Meanwhile, back at the shop, the crew is preparing a fleet of cars that DGM Racing purchased from Richard Childress Racing for this season, hoping to have more speed.

“We’re still kind of testing and figuring which way we’re going. But I think we’re going to run around five to six cars in our program [this season].”

Labbé admitted that the team’s biggest struggle through the opening five events has been finding the right car balance, and the rotation in the middle of the corners. Despite the struggle, he expects to be in contention throughout the season.

“I think we’re overachieving from what our expectations were at the beginning of the season,” Labbé said, who is led by Gosselin atop the pit box. “We want to finish in the top 20 in the points at the end of the year, and we just want to stay consistent and to keep finishing the races like we’re doing and bringing it back in one piece. If we can try to get into the top 15 by the end of the year, we’d be really happy.”

Labbé and the No. 36 team are on pace to be right at their season goals of qualifying in the top 25 and finishing in the top 20. Through the first handful of races, his average finish is 20th, with an average starting position of 24.4.

As the year progresses, Labbé is excited to go to the short tracks and road courses, as that is what the Pinty’s Series is based off with eight short tracks and five road courses on its yearly schedule. The No. 36 team will get its first stab at a short track in four weeks at Bristol Motor Speedway.

Agreed 110% for the car he is driving. Labbe is doing his job, and well! Give that team a slightly better engine deal, he could be cracking T-10’s…..

This is the type of ride Landon Cassill should be after, not lastplacecom racing. Sorry for the pessimist attitude.