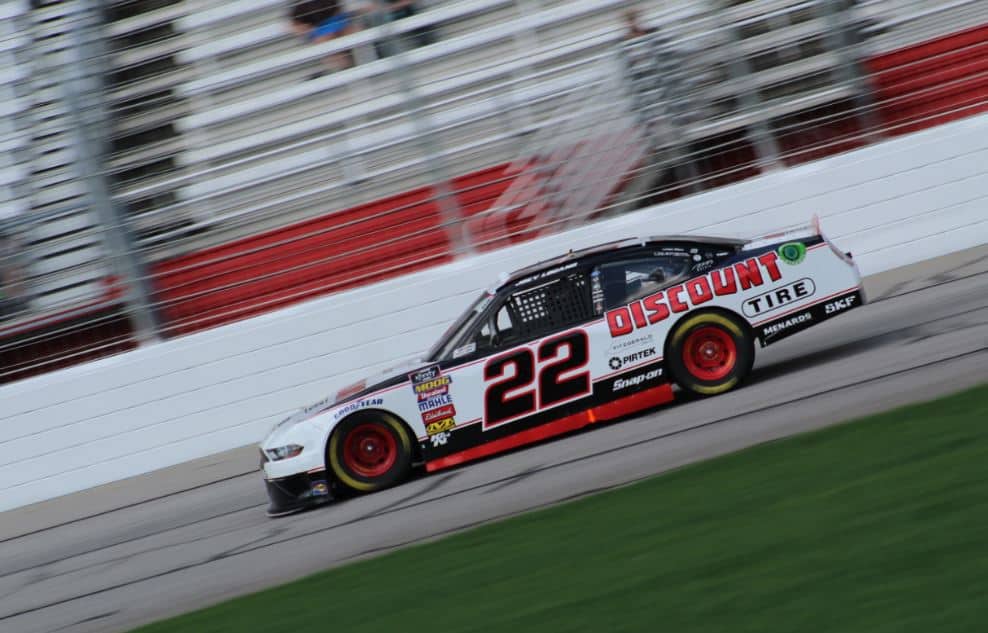 Nothing could stop Joey Logano from winning the NASCAR XFINITY Series’ Roseanne 300 at Auto Club Speedway of California on Saturday night (March 17). Logano led 139 of the 150 laps and swept all three stages. He overcame a differing pit strategy to do so and went from 16th to first in four laps at one point.

“It was a total team effort there,” Logano said to FS1. “Great pit stops, great car, oh my gosh, it was so good. It was one of those races where you feel relieved when you win. It wasn’t like a cheerful one. It was like, ‘Man, we’re supposed to win,’ when you have a car that fast.”

It was Logano’s 29th career NXS win and his third at Auto Club Speedway. He broke a winless streak that dated back to his win at Las Vegas Motor Speedway in March of last year.

“It’s been a while since I’ve been in Victory Lane, which is not good,” Logano said. “But it feels nice to be here and gain confidence and gain momentum, and hopefully do this again tomorrow.”

“I’m really proud of JR Motorsports. We had four great race cars today,” Allgaier said. “All four of us were battling at some point during the race, and it’s always great to battle with a teammate.”

Christopher Bell was the pole sitter for the race and led the first four laps, but Logano stayed right on his bumper and passed him on lap 5. Logano proceeded to gap the field, while NXS regulars raced hard for second place.

Matt Mills blew a tire with four to go in Stage 1 to bring out the first caution. NASCAR was unable to get Mills’ car off the track before the end of the stage, and Logano picked up the Stage 1 win under caution.

Allgaier’s second-place finish scored him the most points in the stage. Custer, Sadler and Reddick rounded out the top five in the stage, while Bell sunk back to sixth. John Hunter Nemechek, in his second NXS start, finished Stage 1 in seventh.

Logano dominated Stage 2, leading all 35 laps of it. Reddick made good use of riding the high line, inches from the wall, to move up to second and finish the stage as the highest NXS regular. Bell recovered to nab third in the second stage, despite having vision issues from the track’s rubble and debris dirtying up his windshield. Sadler and Allgaier rounded out the top five.

Stage 2 also finished under caution, as Nemechek’s solid day unraveled when his right front tire exploded with two laps to go in the stage.

Logano jumped out to lead again on the restart, but Reddick and Bell stayed close behind.

Bell got loose coming out of Turn 4 on lap 98 and spun down the frontstretch, narrowly missing the pit wall. The incident brought out the race’s third caution, and more importantly, gave the field another shot at Logano.

A few laps after the next restart, Bell was trying to come back up through the field. He went high to try to get around Michael Annett. Bell had a fender on Annett in the exit of Turn 4, and Annett came up into Bell. The ensuing crash heavily damaged the No. 5 and No. 20 vehicles and brought out the fourth caution.

Allgaier and Austin Dillon challenged Logano on the lap 108 restart, with the trio going three-wide down the backstretch and into Turn 3. Logano prevailed, but the field caught back up when Dylan Lupton’s engine expired on that same lap to bring out another yellow flag.

Under the caution, Logano’s team elected to stay out, while Allgaier and nearly everyone behind him came down pit road for four fresh tires. Only three cars separated Logano from the cars with fresh tires on the next restart. Allgaier soared back up to second place on the first lap of the run, but it took him a few laps to catch Logano.

Allgaier was stalking Logano until the caution came out with 30 laps to go due to debris from Preece hitting the wall. Logano gave up the lead to Allgaier when he pitted for four tires under the caution.

Teammates Allgaier and Sadler led the field to green with 26 laps to go, and Sadler got the better of his teammate on the inside line to grab the top spot.

It took four laps for Logano to come through the field from 16th place and retake the lead from Sadler. Logano was riding off into the sunset until Austin Cindric blew a tire with 11 to go to bring out a caution.

Everyone on the lead lap pitted, and Logano’s crew got him out of the pits ahead of Sadler. Ryan Sieg’s fuel-only stop gave him the race lead, but Logano quickly took it back in Turn 1 after the restart.

Logano left the rest of the field to cruise to the victory.

“Hats off to Joey [Logano]. They really had the dominant car today. They were really good,” Allgaier said.

Allgaier and Sadler engaged in a tough battle for runner-up in the final run with plenty of passes and crossovers.

“That’s what I love about this racetrack, it gives you so many different options,” Sadler said to FS1. “I was trying to make it the shorter way around the distance, and [Allgaier] was definitely keeping his car way up on the top. Good clean racing, we gave each other plenty of room and raced each other hard.”

Allgaier got the better of Sadler in the photo finish, but Sadler still leads the points after scoring a top 10 in every race so far this season.

The NXS tour has the next two weekends off before heading to Texas Motor Speedway.

THAT ISN’T NO SHOCK ANOTHER CUP DRIVER WINNING IN XFINITY RACE…..
CUP DRIVERS HAVE LED THE MOST LAPS IN EVERY RACE AND WON 4 OUT OF THE 5 RACES SO FAR, AND THE SEASON IS JUST STARTING………..

NEED I HAVE TO SAY ANYMORE…… TOTAL B.S.

You are correct sir, the stats don’t lie and neither do the empty stands and low tv ratings. What is the point of this series anyway?

the point is that nascar/isc is making money off it. Otherwise it would be a memory.