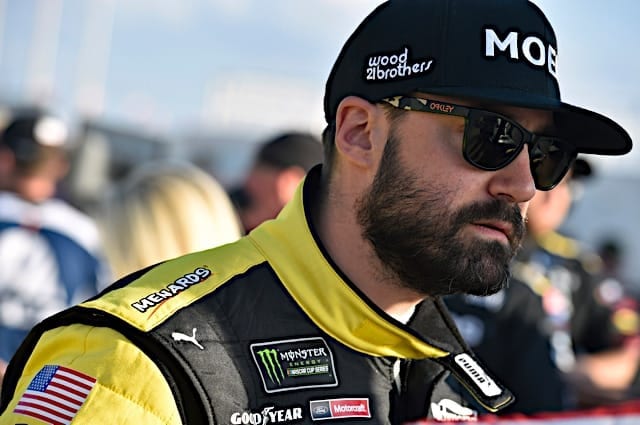 A driver with the reputation for being quiet certainly was on Sunday, even as he raced his way to a solid top-10 run. Paul Menard posted his second top 10 of 2018 on Sunday (March 4). So far in 2018, Menard has finished no worse than 17th and has a 10.7 average finish.

His move to Wood Brothers Racing seems to have been a step up for the 37-year-old veteran.  Menard has never been the type of driver to set the world on fire, but he’s also better than he sometimes gets credit for.  Menard is easily a top-15 driver at a lot of tracks and has shown in the past he can be ultra-consistent if not spectacular.  Sure, he brings a team money, but he can wheel a car, too.

So far this year, we’re seeing a shakeup at the top. It’s early, but the Fords are looking hard to beat, and surprisingly, it’s Stewart-Haas Racing leading the charge.  Team Penske looked to have the edge among the Blue Ovals last year, and with the addition of Ryan Blaney and Menard with satellite Wood Brothers, it’s still probably tops. All three Penske cars and Menard posted top-10 runs, while two SHR teams also did so. Clint Bowyer floundered a bit this week after a strong outing at Atlanta Motor Speedway and Kurt Busch had issues, but Aric Almirola posted his first top 10 of the year (the same number of top 10s as Danica Patrick had in the No. 10 car last year) and has finished 13th or better in all three races.

Also quietly on the rise has been Richard Childress Racing. Trimming down to a two-car operation seems to be agreeing with RCR. Austin Dillon has finished in the top 15 every week and boasts a 9.3 average finish on the heels of his Daytona 500 win, Ryan Newman has a 13.7 average and a top 10 at Las Vegas Motor Speedway. Chip Ganassi Racing has been the top Chevy outfit so far, led by Kyle Larson, while Hendrick Motorsports has struggled; among four teams, Hendrick has just one top 10 so far in 2018.

Martin Truex Jr. doesn’t have a stage win this year, and he hasn’t really been a contender for a race win.  The Joe Gibbs Racing camp hasn’t been quite the threat it was in the fall; the four JGR teams have a total of five top 10s but haven’t been able to touch the Fords on the two 1.5-mile tracks so far.

Kevin Harvick started second, his best qualifying effort of the young 2018 season, during which he’s started no worse than sixth.  That’s a team setting itself up for success instead of having to come from behind for it. The win was Harvick’s second at Las Vegas, both coming in his tenure with SHR. He’s got eight top-10 results at LVMS in 18 starts, and while he dominated Sunday, leading 214 laps, Harvick has led more than 40 laps at the track just three times, with 356 of his 438 laps led coming in his two victories.

While Harvick has never won three races back-to-back in his career, the Monster Energy NASCAR Cup Series heads to ISM Raceway next weekend. It’s by far Harvick’s best track, where he’s posted eight wins, easily the most of any Cup driver all time and double the number of Jimmie Johnson, who’s second on the list. The No. 4 team heads to Phoenix with a ton of momentum.  While history suggests Harvick is past his prime at 42, he’s having none of that, thank you very much.

For most teams, it came when their tires hit the end of their shelf life.  The Goodyear Eagles this week were some of the best we’ve seen yet; new tires were a huge advantage, but cars weren’t blowing them out left and right.

The more teams have to play strategy, the better the race, so this was a step in the right direction. If anything, there needs to be even more falloff during a run, hearkening back to the days at Darlington Raceway or Rockingham Speedway when a driver felt invincible on new rubber and then like they were tied to a stump after 25 laps, long before the fuel ran out.  The harder it is to drive on old tires, the less of an advantage any one team can gain.  Hopefully, this week’s race is an indication that tires will again be the determining factor in pit stop calls rather than fuel.

Why… didn’t Las Vegas natives Kurt or Kyle Busch pull it off?

A win at the hometown track is always special for a driver, so there was extra incentive for Kurt and Kyle Busch this weekend. Kurt, who has yet to win a Cup race at LVMS, qualified a very respectable third but had what looked like a tire problem on lap 183, collecting Chase Elliott and ending both drivers’ days. He wound up 35th, the only consolation the dominance of teammate Harvick and a solid day, right up until it wasn’t.

Younger brother Kyle gave it the old college try, even gaining on Harvick in the closing laps as the leader negotiated traffic, but in the end, had to settle for second. It was an excellent day for the JGR driver, but Harvick’s No. 4 was just too dominant to catch for a second win of the weekend for Busch.

How… long will NASCAR return to Las Vegas in the postseason?

While LVMS bumped up to two races on the Cup Series schedule this year, it’s unclear whether the series’ tenure in the city for its season awards banquet is over.  According to Motorsport.com, the Cup Series banquet could leave Las Vegas as soon as this season, with Charlotte or Nashville rumored to be possible destinations.  NASCAR holds awards for other series in Charlotte at the NASCAR Hall of Fame, and most teams are based in that area. Las Vegas isn’t out of the picture either, but NASCAR appears to be shopping for options, which could be of benefit for teams in terms of travel costs as well as time at home after the season.

My biggest question so far this year is why in the world would Nascar be involved with a company such as credit one bank. Just do a quick web search and you will be shocked at just how bad this bank is. My favorite trick they have is if you make a payment online they don’t credit you far 7 days. If you want credit when you pay you have to apparently pay an additional $ 9.95. I have never had the dubious pleasure of doing business with them but as I say just do a quick web search. Nascar doesn’t need to be involved with a bank such as this

Brian has his reason$!

I think Jimmie Johnson coming from almost 3 laps down at one point to finish 12th was amazing. They are having a lousy start to the season but the team showed why they are champions.

Sol Shine
Reply to  Tom B

LOL!. They’re champions because Nascar made it so thinking it would be good to have a multi year winner when all it did was drive people away. Who wants to watch the same two clowns get gifted love by Nascar 5 years in a row? The other teams didn’t all go to sleep for 5 years, it was wink wink nudge nudge look the other way by Nascar and nothing more. Dover and the pump up shocks just the best example of a long trail of shame.

This is just an observation regarding Jimmie Johnson and could be totally unrelated. However; once Chad got married that was around the time Jimmie started to fall back in the pack. Perhaps Chad is not as focused and putting as much time in the shop as he used to. I know for a fact he practically lived there before he got hitched. I know Jimmie said he wanted to finish out his career with Chad but I think their divorce is coming within the next few months if they don’t turn it around.

Why did Brian’s product start at 12:48 pm local time and can’t start at that time on the East Coast? The fans would like it and Brian always listens to the fans, doesn’t he? Doesn’t he?

Geico wishes it had Casey Meats back in the 13 car instead of Ty Dillon. Bubba Wallace has a father who is white. That makes bubba biracial not African American doesn’t it. Old DW said early yesterday, not bubba is really impressing me today. Bubba started 26th yesterday and at that time was running 25th lol lol lol

And everybody was saying how great it was that Danica was going to be gone.