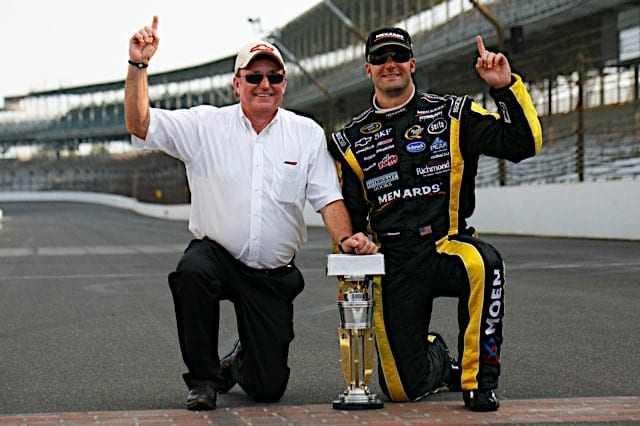 Sunday marks the end of multiple eras in the Monster Energy NASCAR Cup Series. One of them stems from Richard Childress Racing and Paul Menard.

Following a seven-year relationship, Menard will split from team owner and friend Richard Childress after the Ford EcoBoost 400 at Homestead-Miami Speedway. He’ll make the move to Wood Brothers Racing in 2018.

As the 37-year-old approaches the conclusion of his longest partnership with a team owner, it’s all about ending on a positive while continuing to keep his emotions in check.

“It’s all what you make of it,” Menard told Frontstretch. “I’m not a very emotional guy — I can be at times. I’m just going about my business and being grateful for all these people around me. Up until [the checkered flag], it’s basically business as usual. After the race, I’m sure I’ll give a hug to all the guys.”

Finishing his RCR tenure up front may be difficult. The 11th-year driver has only scored three top-10 finishes in 35 starts, putting him 25th in points. Menard hopes to overcome those 2017 challenges to surpass his best Homestead finish of fourth in 2014.

“I want to finish the year and the [final] season of my career with RCR off on a high note,” he said. “It’s a great group I’ve been working with for several years. It’s sad to see it all come to an end but we’re having a fun weekend.”

Joining the organization in 2011, the Wisconsin native finally found a consistent home in the Cup Series. And it didn’t take long to find success as he held off a hard-charging Jeff Gordon to earn his first career win at Indianapolis in the Brickyard 400 later that season.

“It’ll be bigger once I retire,” he said. “We try to win every week, and it’s tough to look back and rest on your laurels. I hope to get a few more before I retire but that’s always going to be a huge feather in the hat.”

The win, as thrilling as it was, seemed to also solidify what was a growing relationship between Menard and Childress, who first met nearly 10 years before teaming up in the Cup ranks.

“I’ve known him for a long time and since 2011, we’ve become close friends,” he said. “Richard is a great man. He’s done a lot for the sport, a lot for me personally.”

Along with the Indy win, Menard has brought two victories to Childress’ XFINITY Series program, first winning at Michigan and 2014 and a second at Road America (Menard’s home track) in 2015. But what has really brought the pair together has happened off the track, in the office and even in the woods.

“He’s a competitor on the track, hunting buddies off the track,” he said. “We’ve been a dozen times probably, we’ve shot duck together, elk.

“And he’s really involved. His office is right at the shop, right where we have our meetings all the time right down the hallway. Anytime we’re talking, he’ll pop right in and have an agenda he’ll want us to cover.”

Childress was the hands-on owner Menard was always looking for. However, as Menard closes in on his final race with RCR on Sunday, the 2018 Daytona 500 will be the next item to cross off his list.

“It was time,” he said of needing a change in his career. “Sometimes, you have to freshen things up. This is a great opportunity to do that. [100 wins] is a huge milestone for the Wood Brothers. For as long as they’ve been around this sport, they’ve won a lot of races. That 100 is a magic number and I’ll have that opportunity if Ryan [Blaney] doesn’t do it on Sunday.”

(Below is a video capture of our conversation with Paul Menard)

Nothing to say here now or next year. At least he’s not a jerk.