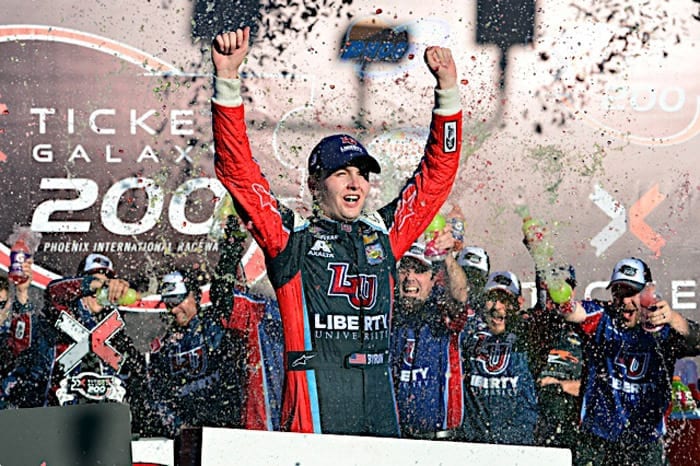 Now that 32 races are in the books, and thousands of miles have run, the Championship 4 for the XFINITY Series championship is set following last weekend’s race at Phoenix International Raceway. That means that by the end of the week, there will be at least one new champion in NASCAR.

The trio of JR Motorsports drivers Elliott Sadler, Justin Allgaier and William Byron, was all but a foregone conclusion to be among the four battling for this year’s title. Yes, bad luck here and there could have cost them a shot, but all season long those have been the top three teams. During the 26-race regular season, those three drivers filled the top three in points for 22 of them.

JRM is going to be tough to beat, and the lone driver outside the organization is Daniel Hemric, a rookie that has yet to visit Victory Lane. Consistency has been the key to success for the No. 21 team.

But who has the best chance of ascending to the throne on Saturday?

The 2016 season ended in bittersweet fashion for the 23-year veteran, finishing runner-up in the championship standings to Daniel Suarez. The No. 1 team came out guns blazing at Daytona, winning the first two stages, before getting caught up in an accident on lap 106 to start 2017.

Unlike 2016, Sadler has yet to find the Winner’s Circle. In his career at Homestead, the Virginia native has five top 10s in 11 career starts. He will benefit by having second-year crew chief Kevin Meendering atop the box this time as he was suspended for the championship race one season ago.

Coming into the season, everyone knew Sadler was going to be consistent, probably pick up a few victories and cruise to Homestead. However, it hasn’t been as easy as that, though he still recorded 24 top 10s in 2017 (down from 28 at this point last season).

When it comes to 1.5-mile tracks this season, Sadler has finished among the top 10 in all but two events. At Charlotte Motor Speedway in May, he crashed out, while Kentucky Speedway he finished 12th in June. At Chicagoland Speedway to end the regular season, the No. 1 car finished third and Chicago drives quite similar to Homestead.

This season didn’t kick off the way Allgaier would have hoped with back-to-back 30th-place finishes. But the No. 7 team clinched its spot in the playoffs at Phoenix in March, leading 85 laps en route to his first victory in five seasons.

Over the course of the season, Allgaier has shown flashes of excellence but coupled with a lot of inconsistency. An average finish of 13.4 is the worst among the four title contenders, though the No. 7 car has paced the field for 495 laps, which is more than the other three contenders combined.

In order to be successful in the championship race, Allgaier will need to remain consistent, and even if he doesn’t have the fastest car, he will need to remain patient. At Chicago that paid off for the veteran driver, as he picked up his second victory of the campaign, scoring multiple wins in the same season for the first time in his career.

Last season at Homestead, it looked like he was going to be the one to challenge Suarez, charging to the front to lead six laps. The trouble is that taking a yearly trip to South Florida has never been one of Allgaier’s favorite journeys, as he has just one top-10 result in seven starts.

Allgaier’s crew chief Jason Burdett is suspended for the title race, similar to Meendering last season. For the Illinois native to take the throne, he is going to have to take this team on his back.

For most people, Byron is probably the favorite to win the championship. Why shouldn’t he be? The No. 9 team scored its fourth victory of 2017 last weekend at Phoenix, in doing so clinching a spot to Homestead.

Since winning his first race of the season at Iowa Speedway in mid-June, Byron’s confidence has been sky high, which led to victories at Daytona and the Brickyard. All told, the rookie sensation picked up three victories in a five-race span.

Since Indy, however, it’s been hit or miss for the No. 9 team with five results outside the top 10. The playoffs itself has been up and down affair for Byron as he kicked them off with an 18th-place result at Kentucky, which came a week after busting a transmission at Chicago, finishing 33rd.

The goal for Byron at Chicago was to run up near the wall to be prepared for Homestead. In one career Camping World Truck Series start at the venue, Byron dominated by leading 31 laps in a victory. At times during the practice sessions, he was a half-second quicker than the field.

Led by David Elenz, Byron came into his own in the XFINITY Series in his lone season; this will be his send-off race before taking over the No. 24 Cup Series ride in 2018. The No. 9 car is going to be hard to beat in Miami, even if 1.5-mile tracks haven’t been its strong suit.

On Saturday, Hemric raced his rear end off to even be a part of the championship picture at Homestead. Coming into the race, he was 18 points behind the cut line, but when Brennan Poole crashed out in the first stage, it left the door wide open.

However, Saturday’s race at Phoenix proved that Hemric can wheel his racecar to outrun other competitors, which could be seen as he passed Cole Custer to claim the final playoff spot. Sure, it was a short track and that’s where he made his living growing up, but mile-and-a-halves have been decent for the No. 21 team this season.

In four mile-and-a-half races during the playoffs, Hemric has a pair of top-10 finishes, coupled with a couple so-so finishes like at Kansas Speedway, where he finished 18th or his finish of 14th at Texas Motor Speedway.

Homestead is an animal of its own and in three career Truck Series starts at the track, Hemric has not finished worse than 12th. Last season, he rounded out the top five.

The No. 21 team is the dark horse this weekend, and Hemric gets back veteran crew chief Danny Stockman, who missed four races due to a penalty during practice at Dover International Speedway in September.

Having Cup teams and drivers competing in this series certainly makes the ‘win and you’re in’ part of things almost a moot point. Too bad they steal the spotlight and purse money from teams that could use it to stay in business.