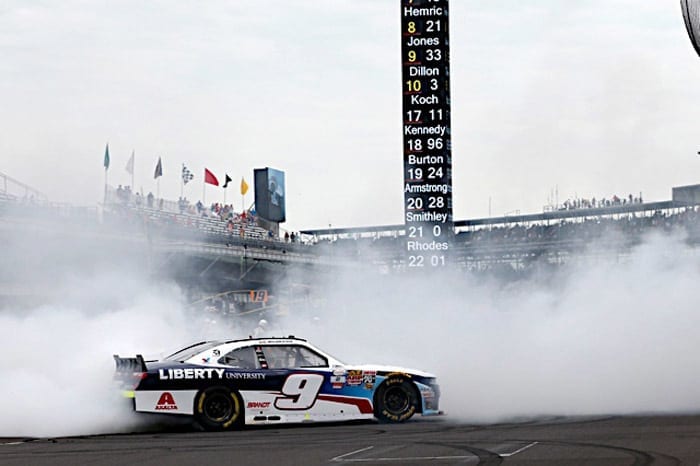 At the onset of the 2017 season, NASCAR placed limits on how many events Monster Energy NASCAR Cup Series regulars could compete in. Depending the driver’s experience the number of races varied.

The goal? To finally make the slogan “names are made here” meaningful as Cup drivers have dominated the XFINITY Series for the better part of the 21st century. Yes, I know, the past four XFINITY champions have full-time rides at the Cup level, so the slogan has some value to it.

However, looking at 2017 as a whole, it’s been yet again dominated by Cup drivers, with some exceptions. For instance, William Byron won three out of five races during the summer, spanning from Iowa Speedway through the Brickyard, but outside of that, winning has been hard to come by.

Byron’s JR Motorsports teammate Justin Allgaier also visited Victory Lane on two separate occasions, including a dominating performance at Phoenix International Raceway in the spring. In September at his home track of Chicagoland, the No. 7 car picked up its second triumph of the season, marking it the first time in his eight-year XFINITY career that the Illinois native visited the Winner’s Circle twice in the same season.

Add in Ryan Reed‘s victory at Daytona in the longest-ever XFINITY race and Jeremy Clements upset victory at Road America, and that makes up all the checkered flags for XFINITY Series drivers this season.  Seven total.

Sure, part-time Joe Gibbs Racing drivers Ryan Preece and Christopher Bell picked up their first career victories, but neither are fighting for the title (though Bell will be in 2018). Some could argue that it’s more impressive that they won, only competing in a handful of races, but then we remember — they drove for Joe Gibbs Racing. Also add Sam Hornish Jr. to the mix with his thrilling victory at Mid-Ohio Sports Car Course, putting a stomping on the field with Team Penske.

And yes, Tyler Reddick and Alex Bowman both picked up their first career victories, each driving the No. 42 machine, which Kyle Larson has also driven to three victories in 2018.

Put together all of those drivers (excluding Larosn) and that’s a grand total of 12 different winners coming from outside the Cup Series. What does that mean? There have still been 19 checkered flags that have gone to the more experienced drivers.

In what was once the Kyle Busch series, the 2009 series champion has won five out of 10 races he’s competed in this season. In the past two races Erik Jones has put on a clinic, though he is still getting used to the Cup Series. His total this season? Three victories. Denny Hamlin also has two victories in four races this season.

Then there are the trio of Team Penske Cup drivers, all of whom have visited Victory Lane in the XFINITY Series in 2017. Ryan Blaney and Brad Keselowski  have a pair of victories this season, while Joey Logano won at Las Vegas Motor Speedway.

At Talladega Superspeedway, Aric Almirola picked up his second restrictor plate victory in the XFINITY Series with Biagi DenBeste Racing. In short, those numbers total 31.

On Aug 1., NASCAR announced the participation guidelines for 2018. Beginning next season, drivers with more than five years of experience in the Cup Series will be limited to seven races in the XFINITY Series, down from the 10-race maximum established for this season. Regardless of experience, drivers who are earning Cup points will be ineligible to compete in any of the seven XFINITY playoff races.

“Any time we implement a change, we’re going to monitor it closely and make sure we’re measuring the level of success or making sure that if there’s an opportunity to make it even better, then we will,” Jim Cassidy, NASCAR’s Senior Vice President of Racing Operations said at the time. “In this case, we really like what we’ve seen and in talking with all the other stakeholders that we would normally talk to, this has been a very popular subject over a long period of time.”

Obviously, NASCAR is in a tough position. They want the lower series, yes, I’m also talking about the Camping World Truck Series to be competitive between its regular participants, but to sell the series it needs established veterans. Kyle Busch mentioned over the summer that if it comes a time where he can’t compete in the Truck Series at all, the team will likely shut down.

As far as the XFINITY Series goes, no Cup driver owns a team besides Dale Earnhardt Jr. However, the 14-time most popular driver has been committed to giving younger talent the edge, propelling the careers of Keselowski, Almirola, Martin Truex Jr., Chase Elliott and many others.

Jeremy Clements, who won his first career race in August may have stated it best: “There needs to be more done. It’s not fair. We’re bringing a knife to a gun fight. I don’t know what they [NASCAR] can do, but I say if you’re a Cup driver and you want to run in XFINITY or the Truck Series, you need to run for a non-Cup affiliated team. That’s the only way I see that they can make it fair. I’ve never got a chance because these owners put Cup drivers in the car. How are we ever supposed to get any sort of opportunity?”

Though it’s tough to see NASCAR ever going in that direction, it would be nice to see XFINITY drivers actually battling for victories during the playoffs. In the five playoff races thus far in 2017, none of the playoff drivers has driven themselves to Victory Lane. That’s the sad reality.

We may have to wait until next season as the eligibility is changing, but in all competitive sports, it’s nice to see the frontrunners get rewarded and that’s been a rarity for XFINITY regulars in 2017.

Saying that Earnhardt Jr owns a cup team is somewhat disingenuous, pointed out by Rick Hendrick showing up in victory lane when a JRM car wins and saying “it’s great when one of our cars win.” Obviously, Jr is owner in name only, the reality is this is a Hendrick operation.

Nascar again thinks more about their bottom line and not what the fans want. Most serious race fans do not like the Cup drivers scooping up all the marbles in Xfinity, race forums and comment sections strongly support this truth. This series could live on its own, if Nascar wanted it to, but for some reason they seem determined to keep it a sideshow for Cup drivers at best.

The rating for the Texas race was a dismal 0.56 (849K total viewers of which only 130k were in the 18-49 age range). This was down by over 50% from last year. Let the Cup regulars keep winning and watch the ratings fall.

Is it the cup regulars winning thats killing the bottom two series? Perhaps its that the cup series itself is overexposed and there is no room left for either one of the others. Regardless, they are dying and I don’t see any way to change that.

Continuing from the “it’s my fantasy” rant yesterday, Busch & Trucks need to be decoupled completely from Cup’s schedule (with the exception of maybe Daytona, Darlington, Martinsville, a road course, something like that). And, Busch/truck events should be paired with each other and perhaps another series (ARCA, ProCup, Southern All Stars for example). Events should be at 1 mile and under venues such as North Wilkesboro, Rockingham, Nashville, South Boston, etc. That and $.50 will get you a cup of coffee.

I think eventually the Truck and Busch Series should merge, maybe run 16 events in cars, 16 in trucks. Even when NASCAR was at its peak, it wasn’t sustainable to have two feeder national series.
At a minimum, a 2 date Cup track should only have one lower series race.

Some good ideas and I agree with all you say except coffee is more than .50 a cup…

It’s not the Cup drivers that are the problem it is the Cup teams & the schedule. In the 80s & 90s Cup drivers competed in the Busch Series but their cars weren’t prepared by cup teams. Teams from the lower series can’t compete against the resources of the biggest Cup teams. Also, during the summer, the series didn’t run many companion races. The Busch series broke off & hit the short tracks of the southeast. Cup drivers didn’t go to those events. To improve the lower series, NASCAR must find the will to reign in the Cup teams & reduce the number of companion races.

I like the idea that any full time Cup driver would have to drive for a non Cup affiliated team if they wanted to go truck or Xfinity racing. They might actually be able to help a team make their equipment better when they do it. Or, is it just that they like competing when they know they have a huge advantage?

I don’t think Kyle would drive in the Busch series or trucks if he didn’t have a huge advantage. Gotta get to 200.

True story. Went to get a burger and brew with a buddy who knows nothing about racing. Xinity race was on the big screen. Told him I was at that track 10 years ago and Texas fans are some of the best. After about 5 minutes he says, ” So….they only let family and friends of the drivers to watch the race at the track? There is nobody there! FYI. If you laugh too hard and beer comes out of you nose, it burns!