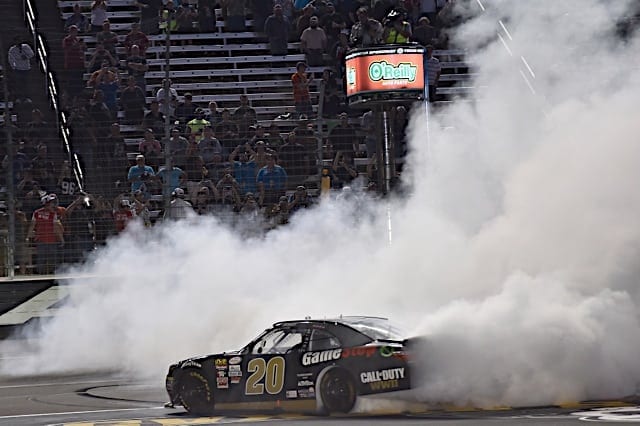 By winning the pole Saturday afternoon at Texas Motor Speedway, Erik Jones became the odds-on favorite to win the 300-mile race. The No. 20 team delivered.

Jones led every lap in the opening stage en route to the stage victory. Stage 2 was a bit more difficult, but after lap 90, the No. 20 team sat atop the scoring pylon. The final stage belonged to Jones as well, though having to overcome late pit strategy and a hard-charging Ryan Blaney.

The No. 20 car was out front for 142 circuits, the race after Jones led 186 laps at Kansas Speedway, though getting put in the wall with four laps to go. It’s his third career victory at Texas in six career starts, now holding a 2.2 average finish, which is the third best of any driver at any track in XFINITY Series history.

“I thought starting the race off, man we’re really fast, we’re really good, this is going to be a mostly dominant race for us and didn’t turn out that way,” Jones said of the victory. “We led a lot of laps, but it seemed like we were really working for it, but you know that’s kind of the way it is.”

Jones dominated the spring event at TMS, leading 112 laps. The 21-year-old has led 368 career laps, at his favorite racetrack.

Blaney picked up his sixth runner-up finish of 2017, while Kyle Larson, Elliott Sadler and Cole Custer rounded out the top five.

It doesn’t matter the configuration of Texas, Erik Jones has a grip for this place.

Ever since he laid eyed on the 1.5-mile racetrack in the Lone Star State, it was Jones personal playground. In April of 2015, the then part-time XFINITY driver picked up his second career pole, his first coming two weeks earlier at Auto Club Speedway. By holding off the likes of Brad Keselowski and Dale Earnhardt Jr., the then 18-year-old gained the respect of the garage. He led a race-high 79 laps.

Later that year, Jones finished fourth in a race that Keselowski went on to win. He finished behind three Cup Series regulars, and oh yeah, he was just about to conquer the Camping World Truck Series title.

In the spring of 2016, Jones finished behind Kyle Busch, though leading 12 laps. In November, the No. 20 car came home fourth, while Kyle Larson claimed the checkered flag.

2017 was the Erik Jones show at Texas Motor Speedway, leading 254 of 400 combined laps between the two races, with an average qualifying position of 1.5. If you give him the head start at Texas, it’s deadly.

Jones has a 2.2 average finish in his six career races at TMS, which is right up there with the best of any driver at any track. If Jones first six events at Texas are anything to come, it could be a while before anyone else gets the hang of the track quite like him.

Ryan Reed barely squeaked into the second round of the playoffs, edging Brendan Gaughan by one point during the first three races of the postseason. Round 2 has been a bit of a struggle for the No. 16 team, especially Texas.

Reed rounded out the top 10 at Kansas two weeks ago, but the No. 16 car qualified 15th on Saturday. With three laps to go in the opening stage, Reed bounced off the outside wall, cutting down the right front tire, going a lap down.

It was all about salvaging the rest of the night for Reed, placing 23rd, picking up no stage points. Heading into Phoenix, it’s a must-win, 33 points behind the playoff cutoff.

“We got that flat tire early on that put us behind,” Reed said of his evening. “I thought we could get the wave around right after it happened at that stage break, but I guess they closed the pits right there. It was the worst-case scenario for us. Tough deal.

“I felt we had an OK Mustang, one that could contend for a top 10 and keep us in this deal and go to Phoenix and give ourselves a shot but it wasn’t meant to be. We are still in it. It is pretty much a must-win going to Phoenix next weekend. That is the mentality we will have.”

Since winning the season-opening race at Daytona, Reed has a fifth-place finish at Dover International Speedway in June. He has five additional top-10 finishes, two of which have come in the playoffs.

Coming into his sophomore season, Jones had never recorded a DNF. Through the first 31 races of the season, the No. 33 machine has crashed out of seven races, four of which were before lap 30. At Kentucky Speedway in June, he wrecked out before the green flag flew.

Saturday evening was much of the same, though at no fault of his own. Jones was spun halfway down the backstretch off the front bumper of Michael Annett. The impact was big enough for the radiator to come out of the Chevrolet.

Jones’ rookie season went really well — 12 top-10 finishes and a 10th-place finish in the championship standings. But with two races remaining, the No. 33 team sits 17th in the standings, 17 points behind Dakoda Armstrong, who has missed the last four events. Tyler Reddick is only 70 markers behind Jones, and the rookie driver has only competed in 17 races.

Heading to Phoenix, Jones has a best finish of 11th in three career races. At Homestead-Miami Speedway, he placed 15th in his lone start at the track last season.

Cole Custer has taken the XFINITY Series by storm in his rookie season, and by no mean is an underdog. However, his performance on Saturday night is definitely an “underdog performance.”

The No. 00 car started from the outside of Row 1 on Saturday, but quickly fell all the way to the back of the field as Custer was fighting what he believed was a loose racecar. It turned out it was much worse.

On lap 8, Custer brought his Ford to pit road, as Ty Dillon went for a spin to bring out the caution. At the moment of caution Custer was still on the lead lap, but was put a lap down when crew chief Jeff Meendering elected to take the time to fix the machine, which ended up being a puncture in one of the tires. Custer fell to 38th, 55 points behind the playoff cutoff.

Custer remained one lap down until a caution came out on lap 56, in which he elected to take the wave around. From there, it was all about gaining positions and points for the rookie driver.

“I think we just had a flat tire at the start of the race and had to go pit but we kept our heads on straight and tried to do what we could to salvage a good day,” Custer said of his race. “We all did a really good job doing that, staying within our limits and get a decent finish. It is just two weeks in a row that we had some bad luck.”

At the end of Stage 2, the No. 00 car crossed the finish line in seventh, earning four stage points. It got better in the second half of the race as Custer picked up his sixth top-five finish of 2017. Heading into the final race of the second round of the playoffs, he is 13 points off the pace.

“We struggled a little in the middle part of the race but like I said, I can’t really be down with our two weekends,” he elaborated. “We have had two pretty good race cars but have just had a flat tire in both the races. It is what it is for us. I think there is no reason why we can’t make that up.”

Erik Jones dominated the event, while Ryan Blaney picked up his sixth runner-up finish of 2017, three of which have come at the expense of Jones. Kyle Larson finished third, but had to overcome a pair of pit road miscues, the last of which came with 75 laps to go. The No. 42 drove from the rear to third.

Austin Dillon was among the top five for much of the night, but crossed the finish line in 10th. Ty Dillon finished 16th and was passed for the lead with nine laps to go when the No. 3 team had to make its final pit stop.

“Couldn’t pass anybody. Lap cars were all over the place. I thought it was a good night for us. It just stinks we couldn’t get around him [Erik Jones].” – Ryan Blaney

“It is pretty much a must-win going to Phoenix next weekend.” – Ryan Reed

Much like the spring event at Texas, there was no second line at the newly reconfigured Texas Motor Speedway. In the past, drivers were able to use all of the racetrack — from the white line to the stickers on the wall to make passes. That’s not the case anymore.

With that said, there is still good on-track racing. Drivers can still pass, but it’s more daring to try another line outside of the very bottom groove because of all the momentum that could be lost. Erik Jones has perfected the right line at Texas in 2017.

The penultimate race of the XFINITY Series season takes places at Phoenix on Nov. 11. Kyle Busch is the defending winner, but is ineligible to compete next weekend.

The JR Motorsports trio of Elliott Sadler, William Byron and Justin Allgaier are all 20-plus points above the cutoff, while Brennan Poole is sitting on the playoff bubble heading into the race that settles the Championship 4. Matt Tifft is five points behind the No. 48 team, with Cole Custer -13, Daniel Hemric -18 and Ryan Reed -33.

BORING……………..Erik Jones leads 142 Laps, Ryan Blaney 34 Laps, Kyle Larson 4 Laps, Ty Dillon 2 Laps ALL CUP DRIVERS 182 Laps of 200. Do you really think it matters if Nascar limits Kyle Busch ,Brad Keselowski,or any other big name Cup Drivers that have 5 + yrs in cup when Erik Jones or Ryan Blaney or Kyle Larson comes down into the MINOR LEAGUE RACES and LEAD THE MAJORITY OF THE RACE AND USUALLY WIN THESE RACES, WHY DOES IT F**KING REALLY MATTER. They don’t really need a playoff grid in Xfinity because the champ will be a driver that probably doesn’t even have a win…. RIDICULOUS !!!!!!!!!!!!!!!!!!!!!!

I’m glad I decided to watch “The Big Sleep” on Turner Classic Movies (love the classic banter between Bogie and Lauren Bacall) than waste my evening watching this abomination. Some championship with Cup drivers dominating the race, and series regulars not even able to compete for the win.

I say let this series die. Do away with it. Make it regional events, and the Homestead race invites all the regional champions to run for the national championship, with NO Cup drivers allowed.