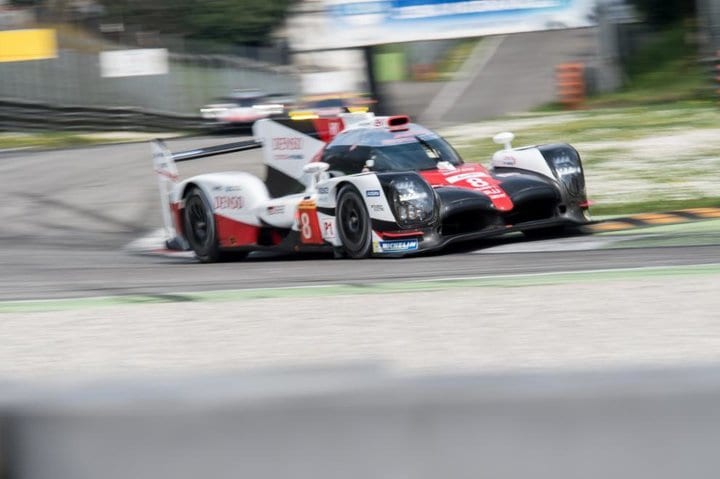 On Sunday, Toyota GAZOO Racing dominated the 6 Hours of Shanghai at Shanghai Circuit.  The two TS050s swapped the lead multiple times over the course of the race.  However, Jose Maria Lopez had contact with the GTE-Pro No. 91 Porsche of Richard Lietz with 38 minutes remaining.  The contact damaged the No. 7 and allowed the No. 8 through into the lead.

From there, the No. 8 Toyota of Sébastien Buemi, Anthony Davidson and Kazuki Nakajima held on to take the overall victory.  It is the trio’s fourth overall victory of the season and the second in a row.

Afterwards, Buemi explained that the end of the race was an adventure.

“The toughest part of the race was the end,” Buemi told the WEC’s Louise Beckett prior to the podium ceremony.  “It was so difficult to stay on the track with all [of] the marbles.  I was trying to avoid any accidents, but it became very difficult to do that.”

The race was run in cool temperatures that never exceeded 62 degrees.  As a result, the Toyotas had an advantage over the Porsche 919 Hybrids, which were never really in the hunt.  While Lopez pulled out a gap early from the overall pole, Buemi moved up from fourth, passing the two Porsches in the first half-hour.  Buemi took the overall lead when Lopez hit the slower LMP2 G-Drive Racing No. 26 of Nico Müller and spun.

The No. 1 Porsche was right in the hunt early on, but a sensor issue 35 minutes into the race forced Nick Tandy to stop on-course and recycle his engine.  The issue did not recur during the race, but Tandy lost nearly a full lap.  The No. 1 would not contend for the rest of the race.

With no full course yellows or safety cars during the race, the Porsches could not make up any time on the Toyotas.

The margin of victory at the finish for the No. 8 was a full lap and four additional seconds over the No. 2 Porsche of Earl Bamber, Timo Bernhard and Brendon Hartley.  However, that performance was more than good enough to clinch the World Endurance Drivers’ Championship.

The No. 1 Porsche of Tandy, Neel Jani and André Lotterer finished third, 28 seconds further back.  The pole-sitting No. 7 Toyota of Lopez, Mike Conway and Kamui Kobayashi ended up seven laps down in fourth after a 13 minute stop to affect repairs following the contact.  These results were enough for Porsche to clinch the World Endurance Manufacturers’ Championship.

In LMP2, the vast majority of the race was dominated by Valliante REBELLION’s No. 31 ORECA 07-Gibson shared by Julien Canal, Nicolas Prost and Bruno Senna.  Senna started from the pole and quickly pulled away from the rest of the pack.

Further back, it was a rather difficult day for Jackie Chan DC Racing, and specificly Tristan Gommendy.  During Gommendy’s stint in the car, he was involved in two separate wrecks.  In the first one, he drove off the track in an attempt to pass one of the Manors and only managed to spin himself out.  Later on, Gommendy was trying to pass the two GTE-Am class Ferraris when he came together with Spirit of Race’s Thomas Flohr and Clearwater Racing’s Weng Sun Mok and spun.

Meanwhile, the No. 38 of points leaders Oliver Jarvis, Thomas Laurent and Ho-Pin Tung had their own problems.  Late in the second hour, Tung made contact with the No. 24 Manor of Ben Hanley, spinning and losing time.  Later on, another spin with the No. 26 G-Drive Racing ORECA 07-Gibson cost even more time.  Neither of the crashes were Tung’s fault.  In fact, both incidents resulted in the other car being penalized.  However, the delays dropped the No. 38 off the podium.

Valliante REBELLION’s No. 31 completed a near trouble-free run to victory by more than 35 seconds over the Signatech Alpine Matmut No. 36 of Nicolas Lapierre, Gustavo Menezes and Andre Negrao.  Valliante REBELLION’s No. 13 for Mathias Beche, David Heinemeier Hansson and Nelson Piquet Jr. were third.  The No. 38 ended up fourth and lost the LMP2 points lead.  The No. 25 CEFC Manor TRS Racing ORECA 07-Gibson was fifth.

In GTE-Pro, Aston Martin Racing’s Nicki Thiim started from pole, but quickly lost his advantage to Porsche GT Team’s Kevin Estre in the No. 92 Porsche 911 RSR.  Estre and teammate Michael Christensen were strong early on, but the car broke in the third hour while leading.  That put them out of the race.

The demise of the No. 92 led to the race being a duel between the No. 91 Porsche and the No. 67 Ford GT.  Ultimately, Andy Priaulx and Harry Tincknell were able to hold on to take their second win of the year in the Ford GT.

In GTE-Am, the pole-sitting No. 98 Aston Martin of Paul Dalla Lana, Pedro Lamy and Mathias Lauda all but led flag-to-flag.  The aforementioned crash with Gommendy eliminated the No. 54 from the race and put Clearwater Racing out of contention.

By the finish, the Aston Martin was victorious by a lap and 10 seconds over the Gulf Racing UK Porsche of Khaled Al-Qubaisi, Ben Barker and Nicholas Foster.  The Dempsey-Proton Porsche of Matteo Cairoli, Marvin Dienst and Christian Ried was third.

Results of the FIA World Endurance Championship 6 Hours of Shanghai

FIA World Endurance Championship teams have one more race in their 2017 season.  The 6 Hours of Bahrain will wrap up the season on Nov. 18 from the Bahrain International Circuit.  The desert circuit will decide the remaining championships.

Congrats to the Manor team om a steady 5th in LMP2 at Shanghai. Maybe not F1 but those guys are racers. And also to the winning Aston in GTE-Am. Shame they couldn’t pull off a double by taking the Pro class as well, but well done anyway.