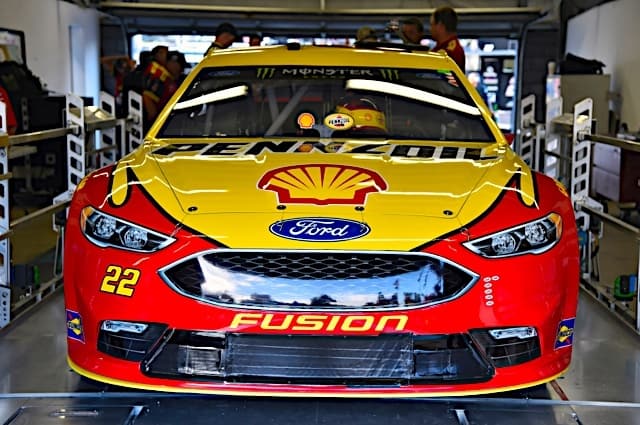 Halloween came a couple of days early for drivers and teams in the Monster Energy NASCAR Cup Series race at Martinsville Sunday. It seemed once the new lights at the half-mile paperclip oval turned on, so did the intensity as the laps began to wind down.

Whether it was a trick, a treat, or somewhere in between for your favorite driver, fans were on their feet. The entertaining finish reminded us all how this short track delivers for NASCAR each and every year.

The big topic is if Denny Hamlin was out of line wrecking then-leader Chase Elliott in the final laps. Some of the questions include wondering if Hamlin should apologize face-to-face (letters on social media after the race don’t count), if Elliott should be upset, and if anyone believes anything Hamlin said after the race?

PETERS: Where Do Hamlin And Elliott Go From Here?

It’s no surprise Hamlin made the bump-and-run move. You could see it coming a half-mile away. But what was a surprise is that Hamlin didn’t have enough skill to just nudge Elliott out of the way and into the upper groove instead of putting the No. 24 into the wall.

I kept waiting for Hamlin to say, “I didn’t mean to wreck him, I just wanted to rattle his cage.” But there was no such luck. It is hard to believe, then that Hamlin seemed somewhat surprised by Elliott’s reaction. The youngster may be a bit mild-mannered, but no competitor is just going to say, “oh golly, gee, we’ll get ’em next time” after being punted out of the front with his first career win within striking distance.

So, with Hamlin, who may well be the best current driver without a title, desperate to be one of the Championship Four at Homestead, the move was no surprise. It was the way in which he did it that made a difference. But we also may have seen the maturation of Elliott, too.

That the 21-year-old let Hamlin know his displeasure will serve the sophomore well in the future. From this point on, Elliott made it clear he won’t be run over.

What has not been a good year at all continued that way for the encumbered Joey Logano. He was contending for the lead much of Sunday, only to see his hopes dashed (or maybe slashed). Some contact caused a tire rub and eventual blown tire that began all of the late-race restarts and melees.

The big question for the No. 22 team is if he should have come in and pitted while teammate Brad Keselowski was in the lead and ahead of the pack? Or did they think the tire in question would last long enough to finish the race? Was Logano staying out, trying to push some championship competitors down in the points a bit?

At least when the tire blew and Logano spun, it didn’t take out 30 or so cars behind him. But it also cost Keselowski the lead and almost cost Ryan Blaney a good finish. (Remember, Blaney was right behind Logano when the tire expired.)

Nonetheless, it didn’t work out all that bad for Keselowski. He finished fourth, easing concerns of how well he can run the next two weeks at Texas and Phoenix. Kes remains 29 points in front of fifth in the standings with two races left until the cutoff point.

Benefitting from the late-race wrecking to claim the first spot among the Championship Four was Kyle Busch. And the sort of funny/odd thing about this victory is that Busch didn’t make any unusually aggressive contact with other cars to get to the front.

The Martinsville win will allow Busch to go for his second title on Nov. 19 at Homestead. When Busch has a title in sight, he is a hard guy to bet against. That’s regardless of who the other competitors may be. Busch was by no means dominant in this race, but he was near the front most of the day. And when you get in a short-track, hit-and-run type of sprint to the finish, you can sometimes steal a win. Give Busch credit for having the right balance of aggressiveness and toughness to capitalize at the end.

Looking at the points picture here, Elliott is almost in a win-to-get-in make the Championship Four situation. The Hamlin incident not only took Elliott out of the potential victory, but with a 27th-place finish, Elliott is now eighth in points, 26 behind fourth-place Kevin Harvick.

The plus side for Elliott is even though he has yet to win his first Cup Series race, everyone knows he is capable. And with a fast track like Texas next on the list, if he’s got a late lead, the driver behind most likely won’t be able to use the bumper to move Elliott out of the way.

Moving forward, it’s not a matter of if the wins will come for Elliott. It’s just a matter if that first one will be in one of these next two races.

The other side of this points switch is that if Elliott had indeed found a way to win Sunday, it would have put the drivers in fifth through eighth positions in a tough spot. They would have wound up 30 points or more behind the fourth-place cutoff.

Now, Busch is secure, while Martin Truex Jr. and Keselowski also have some cushion. But the difference between fourth-place Harvick and Jimmie Johnson, Blaney, and Hamlin is just eight points. When it comes down to the end of the stages for these next two races, and especially, of course, down to the end of the race, there will be no teammates or manufacturer buddies. It will simply be every driver out to get what they can, regardless of who is ahead of them.

That’s just the way it should be.

In his only three races at Texas, Chase Elliott has finished in the top 10 all three times. You can bet he will be intense as ever this week; plus, this intermediate has been good for Hendrick Motorsports. I’m going to say he finishes the deal for his first career win. That’s even though teammate Johnson has won at Texas in three of the last five races there.

The driver you might not think about underdog sleeper pick of the week is Jamie McMurray. He has three top 10s in his last five races at Texas with an average finish of 11th.

No mention of who started the questionable melee, of course…he went on to win the race. SHOCKER! Always a pass, always.

You got that right!