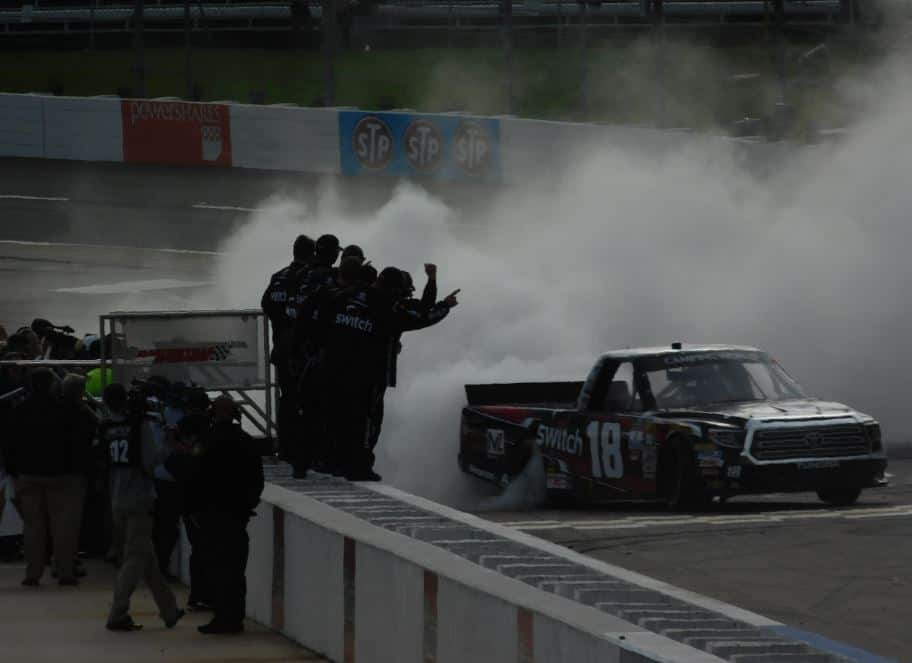 This time, it’s his first win.

After perfecting the outside lane on the final restart of Saturday’s Texas Roadhouse 200, Gragson passed Matt Crafton, leading the final 10 laps and winning his first race in the series.

“I knew I had to use that outside to my advantage,” Gragson said. “We made it work when it counted and we’re in Victory Lane. We got the win. This is pretty cool!”

Following the victory, Gragson climbed from his No. 18 Kyle Busch Motorsports Toyota and climbed the frontstretch fence, giving fans a throwback to Tony Stewart and Indianapolis 500 champion Helio Castroneves in the post-win celebration.

Included in the top-effort day for KBM was Harrison Burton, who drove to his best finish of fourth in only his seventh Truck start. Despite losing out on his first triumph, the 17-year-old was proud of his friend and teammate Gragson.

“It’s always good for the sport when you can get someone else in Victory Lane, a young guy especially,” Burton said. “Coming down to a short tack and getting it done… it’s cool. But I’m here for me. I wish it was me out there even though it’s one of my buddies. No matter what your relationship is, you want to beat them. That’s what makes the sport great.”

Todd Gilliland finished fifth in his No. 46 KBM Toyota while Christopher Bell, who got spun by Crafton on lap 123, bounced back for eighth place.

The strong day by KBM was at the expense of Crafton, the two-time Martinsville winner who led more than half the event (102 of 200 laps) before missing out on Victory Lane on the last restart.

Even a captain’s serving of stage points couldn’t keep Crafton from leaving the track happy.

“At this point, I really don’t care,” Crafton said of stage points. “It just sucks when you finish second. A lot of salt in the wound.”

John Hunter Nemechek was another unfortunate fellow in Virginia, as the playoff driver crashed out of the race on lap 37 after losing his brakes on his No. 8 Chevrolet. He finished 30th.

Johnny Sauter had a gallant battle with Crafton mid-race, trading some paint for the top spot. Eventually, Sauter lost the lead and ended the day third.

Stewart Friesen finished sixth followed by Kaz Grala, Bell, Ben Rhodes and Austin Cindric to round out the top 10.

Noah G is yet the newest breed of young guns. Bringing back the obnoxious burnouts and not knowing how to act in Victory Circle.