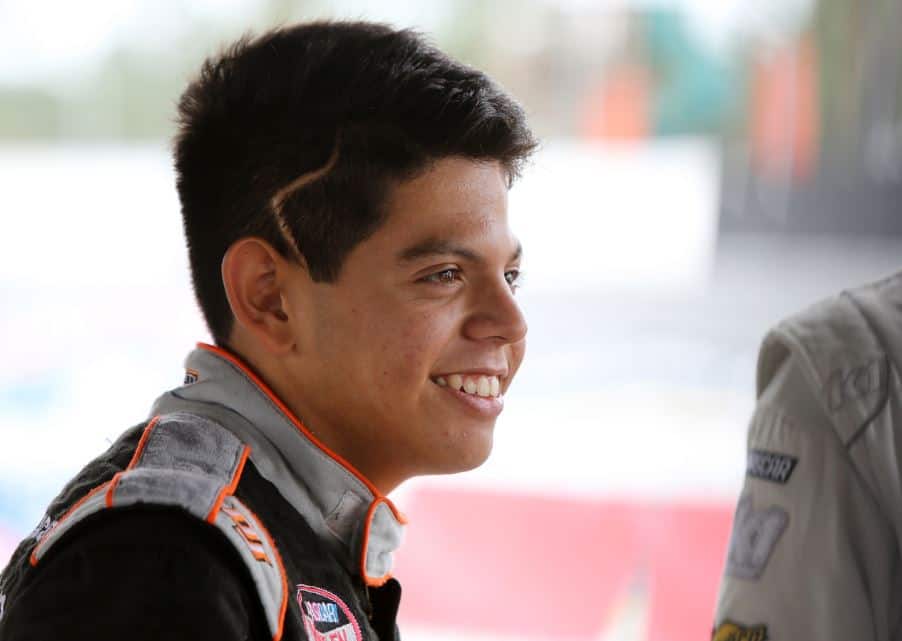 Evel Knievel, the late, great stunt performer, once said that bones heal, pain is temporary and chicks dig scars. For 17-year-old Ryan Vargas, these are words to live by.

While he competes in the 2017 Drive for Diversity Combine hosted by K&N Pro Series East team Rev Racing, Vargas stood out even before he hit the racetrack.

“When people ask me, they just think it’s a wacky haircut at first,” Vargas told Frontstretch. “But it’s not.”

In 2000, Vargas was born with craniosynostosis, an abnormally early fusion of soft bones on the skull. And while it was cured through surgery at this early age, Vargas still carries the scars around his head to this day.

“It made the side of my head flat,” he said. “I had to get surgery to have my skull reconstructed and refigured. It’s actually a big scar, it goes all the way around my head. They actually had to cut my head open to do the surgery.”

Growing up in California, Vargas started eying a racing career, one that was never put in doubt despite the troublesome medical past.

“As I grew up, it was less and less of a worry,” he said. “Even today, my skull is still flat on one side, but it’s kind of hidden by my hair [laughs]. I don’t let that set me back, it’s not anything that really bugs me.

“But when I post online about having craniosynostosis, I have a lot of great support about it. I have parents commenting saying, ‘My son has this, thank you for speaking out because a lot of people are afraid to talk about it.’ Right there, I was able to inspire someone. That’s the greatest thing you can say.”

While having support online, his father has been the main force behind Vargas’ racing career. One day after testing a Bandolero car, his father gave him a scenario: racing or stick-and-ball sports.

“On the way home [from the test], my dad said this: “OK son, we can go go-karting at K1 Speed every other weekend, have some fun, and then you can go play baseball or play basketball. Or, we can go racing. But if we do, we’re going head-first into it and we’re going to make you a champion. That’s going to take a lot of hard work.’

“He said, ‘This drive is 45 minutes, you have all 45 minutes to make the decision.’ Five minutes into the drive, I said I wanted to be a racecar driver. That was the moment I told myself I knew what it would take, but I want to do it.”

First day of the #D4DCombine was amazing! Really enjoyed the media part, and I had a great time getting to know the other racers! @RevRacin pic.twitter.com/jwyzEowye4

From that point forward, Vargas and his family began to understand the true obstacles one must face building a life on a racetrack.

“Our family, we’re not the most well-off people,” he said. “My parents work as hard as they can to afford my racing career, put me on the racetrack every weekend. There have been times this year where we’ve had to take races off the schedule because we didn’t have funding to do so.

“But, my family has had my back through every single step. When I have my bad races, my parents are always there to let me know there is always another race. My dad has been my crew chief pretty much all the way until we go to late models. Having that faith on you, everyone believe in you, is probably the greatest feeling out there.”

Looking down the barrel of his best opportunity in racing yet with the Drive for Diversity, Vargas is appreciative of the next open door, hoping to follow the path of Kyle Larson to the Monster Energy NASCAR Cup Series.

“Having the opportunity to be in this combine with all these very successful drivers, it’s a reminder to me that our work has not gone unnoticed,” he said. “It’s special to me to know that even though we sometimes have to work a little harder than some people, in the end, it was worth it.

“I myself am a Kyle Larson fan, I watched him through the dirt ranks, Trucks and now XFINITY and Cup. Knowing that drivers like him and Bubba Wallace, Daniel Suarez have come through the same programs and tests I have, it really puts it in perspective. You’re getting there, you’re going down the same path as them and it’s right around the corner.”

Like Evel Knievel’s daring adventures, driving a racecar, naturally, is a dangerous act of risk and reward for hours at a time. But for this young up-and-coming driver, it’s the pain and healing that have been the building blocks for the races to come. It’s what makes him soak up every opportunity and what makes him thankful for every lap on the track. And people have taken notice.

“Every time I get in the car, I learn something,” he said. “It’s not just driving a car anymore, you have to be good at talking to the microphone, you also must have the physical strength to endure the long races. That’s one thing I had to learn. The media stuff went well — I like talking to people, I like doing interviews and doing speeches. That was fun for me.

“Not only am I representing the West Coast, but I’m also representing the younger drivers. One thing that stands out is that I’m getting drivers who I watched race growing up, and they’re messaging me, calling, telling me ‘Hey, you’re doing us proud. You got this.’ It’s really cool to have the support of people like that behind you. It makes you want to work even harder.”

Thanks Leon, I had a blast working with Ryan on this.