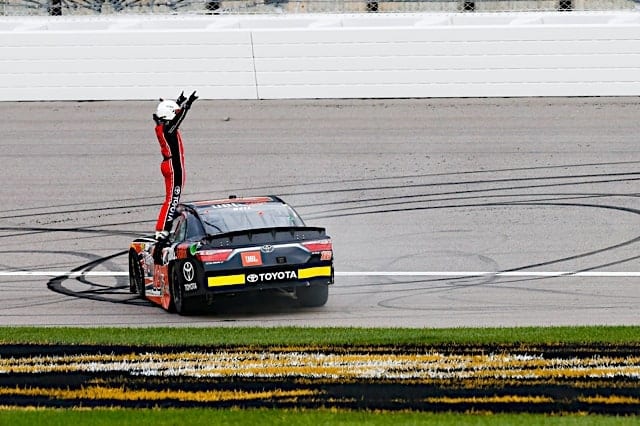 Monster Energy NASCAR Cup Series: Ryan Blaney Delivers in Kansas – Ryan Blaney was put to the test Sunday at Kansas Speedway. The second-year driver required a fast hot rod and a strong finish entering the Hollywood Casino 400, the elimination race from the Round of 12, only eight points to the good.

Hey, he only had three Cup champions and a starting position from the rear to overcome. Not much, right?

Well, Blaney made it look that way as he drove from 40th on the grid to inside the top 20 within the first 25 laps. And by the end of Stage 1 on lap 80, he was fourth. The charge continued into Stage 2 as he maintained track position to finish eighth, tallying up 10 stage points on the day.

With a new-found sense of comfort while the day turned to chaos around him, the 24-year-old survived it all to finish third, his best result in 18 races dating back to his Pocono victory in June.

For Wood Brothers Racing, the presence in the Round of 8 speaks even louder, as it looks to finish in the top-8 finish in the championship for the first time since 1994, when Morgan Shepherd finished sixth. – Zach Catanzareti

XFINITY Series: Joe Gibbs Racing teammate Collide, Christopher Bell gets Victory – Saturday’s Kansas Lottery 300 was dominated by Erik Jones, leading 186 of 200 laps. However, the No. 20 team saw the race slipping away as a hungry, determined rookie Christopher Bell was closing in on the lead in the final laps.

Holy crap! I just won in the @NASCAR_XFINITY series!!! I feel terrible for @erik_jones , but stoked for our partners @JBLaudio @ToyotaRacing

With 10 laps to go, Bell was upward of two seconds behind Jones, though passing Ryan Blaney for the runner-up position. Heading into Turn 3 with five laps to go, the No. 18 car dive-bombed Jones, overrunning the corner, sliding up in front of the No. 20 car. The teammates collided.

Bell was able to escape the incident to pick up his first career victory in just his fifth start of the season. Meanwhile, Jones was frustrated at the ordeal.

“It’s not dirt racing, he’s not clear,” Jones said of the incident. “I can’t just stop on the top. I didn’t expect him to drive in on the bottom so far he wouldn’t be able to hold his lane. I thought we were going to race for the win and it wasn’t much of a race, it was more of a wreck.”

Bell has two more starts left this season in the XFINITY Series before going full-time for JGR in 2018. – Dustin Albino

Formula 1: Lewis Hamilton Atop at Circuit of the Americas – Lewis Hamilton again earned the pole position to start a race, and he followed it as he frequently has, with a win.  Hamilton’s drive started with a slight hiccup at the United States Grand Prix, when Sebastian Vettel pipped him on the start and took the lead after the Turn One.  Vettel succumbed to the pace of Hamilton and his Mercedes by lap 8 and from there, Hamilton cruised.

Vettel took second with Kimi Raikkonen following in third.  Vettel had passed Valtteri Bottas with five laps to go to close in on his teammate, where Raikkonen then politely allowed Vettel through. Raikkonen, however, was unable to defend from Max Verstappen as he drove a late charge and took the third spot on the podium.

The results all but concludes the driver’s championship as Hamilton extended his points lead and has made it near impossible for Vettel to close the gap.  In similar fashion, the constructor’s title is also rather settled with the second-place battle still being one in slight contention between Ferrari and Red Bull.  Red Bull’s hopes took a hit, though, at the USGP when Daniel Ricciardo retired in the early stages of the race.

The track is beginning to provide more of a challenge to the drivers as it has become weathered and bumpy, meaning it eats at the tires and handling becomes more of a significant factor as compared to the straight-line speed that is vital on the front and back straights.

rendon Hartley, this year’s 24 Hours of LeMans winner, made his debut with Toro Rosse but finished at the back of the field, yet the surrounding commentary indicates he handled himself well.

Fernando Alonso, who announced a contract extension with McLaren, endured another engine failure a further indication that the switch to Renault engines next year can not come quick enough.

Sports Cars: Magnus Racing Returning to IMSA? – Quite possibly.  SportsCar365.com is reporting that Magnus Racing is working on a full-time return to the IMSA WeatherTech SportsCar Championship’s GT Daytona with their Audi R8 LMS GT3 in 2018.  The team spent the 2017 season racing two cars in Pirelli World Challenge.  In GT, the team ran the No. 4 for Pierre Kaffer and Spencer Pumpelly.  Team owner John Potter and Marco Seefried shared the No. 44.

In 2016, the team raced full-time in GT Daytona, winning the Rolex 24 at Daytona and Lime Rock in class.  However, the team was excluded from VIR due to a ride height infraction.  The team argued at the time that the infraction was caused by contact on the first lap, but to no avail.  The instance likely angered the team and played a role in the Pirelli World Challenge move.

With Stevenson Motorsports folding at the end of the season, Audi currently has no full-time teams in the IMSA WeatherTech SportsCar Championship.  With their recent overall victory in the California 8 Hours, Magnus Racing has shown that they are more than worthy of factory support.

If the move back to GT Daytona is made, Potter would more than likely be one of the full-time drivers.  Who partners with him would be a mystery at the moment. – Phil Allaway

This may ruffle some feathers, but last time I checked Erik, every car has a brake pedal. You could have hit the brakes, turned left and passed him back. That is what racers do. He “cleared” you by a long ways, not by an inch. You had time to react but chose to stay throttle to the floorboard instead.

What Bell was doing was racing to win, you expect him to let you win?