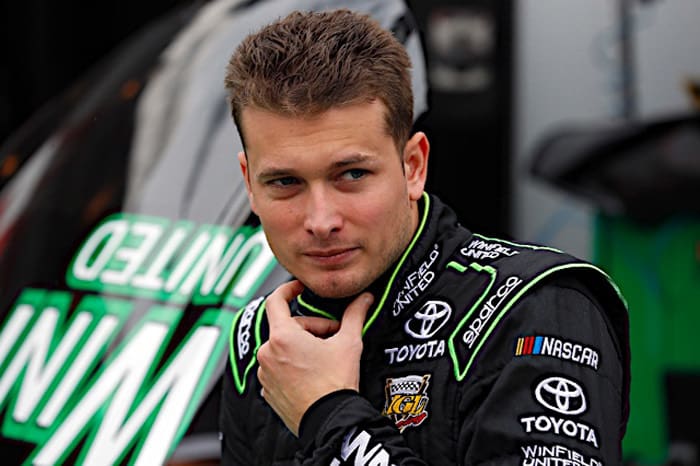 Chances are you’re focusing more — if not completely — on the Monster Energy NASCAR Cup Series championship battle that’s wrapping up in a month, and rightfully so, since it seems like it could be quite the nail-biter once all is said and done.

That said, five races remain in the 2017 Cup season, and while some teams are working toward a potential championship at Homestead-Miami Speedway (or at least a berth in the Championship 4), others are without further playoff hopes, either finishing out the season by keeping the status quo for a few more races (in the case of someone like Landon Cassill and Front Row Motorsports, who will part ways after 2017) or preparing for 2018.

Occasionally, the final few races of a season mean testing out possibilities for the following year, perhaps giving younger drivers a chance at an upper series for a one-off event. This happened last season when Ryan Reed made his Cup debut in Roush Fenway Racing’s No. 99 at Talladega Superspeedway. In fact, three drivers made Cup debuts in the waning races of 2016, with Gray Gaulding and DJ Kennington joining Reed.

Even though the charter system seems to have curtailed one-off teams a bit, there may remaining opportunities for a few more debuts before the end of 2017, especially with teams like the StarCom Racing No. 00 joining the field toward the close of the season. And that’s kind of exciting, because, as written about here previously, 2017 has been a boost for newbies in the Cup garage.

After a ho-hum year in which just four new drivers joined the Cup ranks in 2016, 12 have done so in 2017, matching the number accomplished in 2015. For reference, that list includes Daniel Suarez, Cody Ware, Ryan Sieg, Ross Chastain, Alon Day, Kevin O’Connell, Gary Klutt, Tommy Regan, Darrell Wallace Jr., Billy Johnson, Josh Bilicki and, most recently, Ray Black Jr. Exciting and encouraging for drivers wanting to make the next step, yes, and interesting because with just one more debut in 2017, the series will break a tie with 2015 and 2013 and become the Cup season with the most debuts since 2004, when 16 different drivers started their first race.

Who’s most likely to join these 12 as Cup debuts in 2017? As evidenced by the list above, anything’s possible; heck, in the case of Regan, you don’t even have to have competed in the XFINITY Series to do so, or you don’t have to have experienced runaway success in the lower series (only Suarez and Wallace are winners in XFINITY or the Camping World Truck Series). So it’s a bit of a stab in the dark to predict who could be the other drivers in the Cup garage before season’s end.

The no-brainer of the group if there was one. William Byron’s already slotted into a Cup ride in 2018, taking over the No. 24 as Chase Elliott moves to the No. 9 (replacing the No. 5 of Kasey Kahne in the process). Though Hendrick Motorsports hasn’t trotted out a fifth car in a few years now, the last time it was done was for its last young gun, Elliott, when he ran a handful of races in the No. 25 in 2015. Why not give Byron the chance for a pre-2018 test session (aside from, you know, the fact that it could distract from chasing his first XFINITY Series championship)? His Truck Series debut, which occurred a year before his first full-time run in 2016, happened at Phoenix International Raceway in 2015, for what it’s worth.

Rumors have had GMS Racing moving up to the Cup Series sometime down the line (originally it was 2018, but that seems to have been stayed for the time being). It seems, too, that Spencer Gallagher’s career trajectory is pointed toward some sort of Cup presence eventually. It’d be interesting to see GMS, if it has a car ready, do a one-off race to test the waters for a future run in the premier NASCAR series. And if it did, one’d imagine Gallagher would be the driver to do it.

There is a handful of cars running the Cup schedule that have rotating drivers almost weekly due to racers bringing sponsorship for this week or that — see the debuts of Black, Chastain and more in 2017. Though Dakoda Armstrong is out of his ride in the XFINITY Series for JGL Racing’s No. 28 due to a sponsor being unable to commit for the rest of the 2017 season, he seems like a prime candidate to potentially take one of those rides in a one-off capacity, much like Black, who initially raced XFINITY in the No. 07 but was occasionally sidelined due to sponsorship issues and still brought a sponsor to Rick Ware Racing’s Cup No. 51 earlier this year. It would be nice to see Armstrong back on the track, anyway; his two top fives in XFINITY this year were the most he’d ever accomplished in a single season in the series.

Maybe it hasn’t totally been the year Cole Custer would have hoped for in his maiden full-time XFINITY run, but the driver of the No. 00 has been strong as of late, rattling off four straight top 10s (and seven in the last eight races) entering Kansas Speedway. Stewart-Haas Racing hasn’t often fielded an extra car on a part-time basis, but it’s not unheard of either — see Danica Patrick’s limited run in 2012. It could be rewarding for the 19-year-old, who’s gone on a tear to end the year and has a shot at the series championship, to snag a start in the upper series, especially if his title aspirations fall through by Homestead.

Jeremy Clements has been digging in the XFINITY Series since 2003. He finally broke through with a win this year. The similarly family-funded Ryan Sieg got some starts with BK Racing this year after multiple years with his own team in the lower series, much like Clements. C’mon, someone give him a shot.

William BYRON i WISH YOU ALL THE LUCK IN THIS WONDERFUL SPORT IN TAKING OVER THE # 24 AFTER CHASE ELLIOTT MOVES TO THE # 9 THAT HIS DAD RACED AND DONE A VERY FINE JOB.i HOPE YOU HANDLE THE X JEFF GORDON’S CAR LIKE HE DID AND YOU WON’T HAVE A WORRY IN THE WORLD IF YOU DO THIS GOOD LUCK IN YOUR VENTURE.