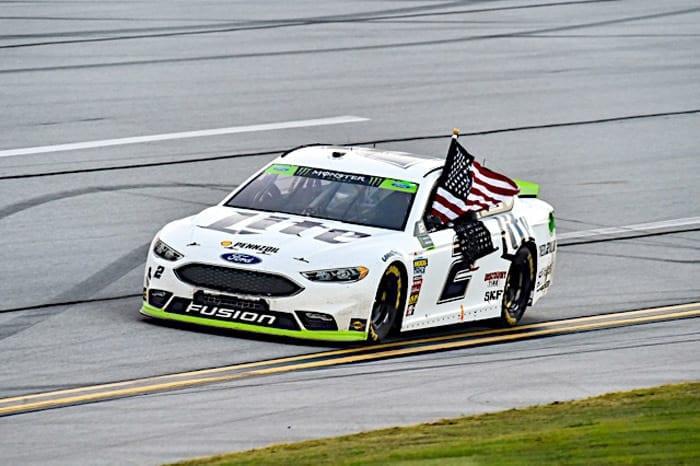 On a day where many playoff drivers found Talladega Superspeedway trouble, only four of 12 championship-eligible drivers finished the 500-mile wreckfest. There was a golden opportunity for someone outside the postseason like Dale Earnhardt Jr. to steal the victory. But in the end, Brad Keselowski fought off the Earnhardt nostalgia and a myriad of problems to earn a hard-fought Cup Series win.

The No. 2 team won Stage 1 and then placed second in Stage 2, earning 19 crucial bonus points. But then the afternoon spiraled downhill quickly. A radio issue was discovered, and the team had to make an unexpected pit stop to give back the ability for Keselowski to hear and communicate with his spotter.

The fix was made, but the damage was done in terms of track position. The No. 2 car restarted 30th and seemed out of it as Keselowski struggled to fight through traffic. But multiple Big Ones late in the race decimated the field and opened the door for him to hook up with Team Penske teammate Joey Logano. The duo worked its way forward, Keselowski charging to the lead while Logano blocked Earnhardt on the last lap to seal a win for the No. 2 car.

With the victory, Keselowski now has five total at Talladega Superspeedway. That’s one behind Earnhardt and Jeff Gordon for second all-time.

Does this mean Keselowski is the new king of plate racing with Earnhardt hanging up his helmet? It’s certainly possible. No matter what, Keselowski overcame a lot of adversity Sunday and earned a free ticket into the Round of 8 for his efforts.

What… happened in the race?

Crashing. Talladega, known for the Big One, turned into one big demolition derby. A total of just 14 drivers finished the race, with only 12 of them on the lead lap. The 26 DNFs were easily the most of the 2017 season and NASCAR’s playoff era.

It didn’t matter where you were today, you couldn’t hide from any of the wrecks. There was a Big One in the rear of the field, another in the middle and another up front. It was one of the first races in a long time that the list of drivers out was much longer than who finished.

With such a small amount of drivers running 500 miles, any of them could have gone to Victory Lane. That also led to some unfamiliar faces running near the front. Rookies Gray Gaulding and Ty Dillon wound up with top-11 finishes, unlikely contenders at the end along with plate race experts David Ragan and Trevor Bayne.

Where… did the pole-sitter and the defending race winner wind up?

Earnhardt had an up-and-down day that ended on a high note. He started on the pole and then remained up front most of the afternoon until a speeding penalty cost him crucial track position.

Earnhardt spent the rest of his day trying to fight back, dodging wrecks left and right. History was not on his side, as the last few years at Talladega for Earnhardt haven’t been the greatest (four DNFs for wrecks in his last six).

But somehow, the magic surrounding his final plate race start led to some minor miracles. Earnhardt managed to avoid most of the incidents in the event, never seriously damaged until the final wreck of the day. Contact in that one bent his splitter, doing just enough to harm the handling and keep him from final-lap momentum that could have pushed the No. 88 through to Victory Lane.

In the end, Earnhardt finished seventh. He posted his 16th top-10 finish at Talladega and second top 10 in the last three races as his Hendrick Motorsports team is back on track.

Last year’s winner, Logano, had that dominant look to his car again Sunday. He’d won the last two fall races and had a chance to go an unfathomable three-for-three at Talladega in October. He was involved in one of the last crashes of the day, but it didn’t stop him from going up there and giving the fans a show. Logano delivered a strong outing, finishing fourth to give his Team Penske operation some much-needed confidence.

When… should this Talladega race be run?

This weekend. Since the elimination format was adopted in 2014, Talladega was the last race of the second round. This year, it was moved up a week, opening debate on whether it would make the racing better or worse.

With all that happened Sunday, the on-track action validated NASCAR’s decision. Instead of automatically being eliminated after a crash or running the race in fear, drivers have light at the end of the tunnel in the form of Kansas Speedway. No one seemed to stroke it, running in the rear for much of the race while the battle for stage points left all playoff drivers slugging it out up front.

NASCAR made the right call on moving this race. After the show the drivers put on today for the fans, they probably agree, too.

Why… did Brad Keselowski win?

Keselowski was without a doubt one of the favorites entering Sunday. He lived up to that role during the race, able to block any line throughout much like Ford teammates Ryan Blaney and Logano. Ford, after some early playoff struggles, roared back Sunday with a package that could race fender-to-fender with its Toyota rivals.

It’s a key moment for Ford but more so for the 2012 series champ. 10th in points after Charlotte, the victory puts him second in the points to Martin Truex Jr. and earns him an automatic bid to the Round of 8.

Can the No. 2 team, which struggled through much of the summer, pick up the pace down the stretch? Crew chief Paul Wolfe said following the race he felt Martinsville Speedway is a must-win track for them. If that happens, of course, they earn a spot in the season finale at Homestead-Miami Speedway. Could this victory start a run for Keselowski’s second title?

How… did the championship picture change when the chaos ended?

Eight of 12 playoff drivers didn’t even finish the race today. Only two managed to pull off a miracle, steering clear of wrecks. Keselowski locked up the victory while Denny Hamlin stayed under the radar and quietly earned a top 10. Kyle Larson and Matt Kenseth suffered damage during crashes but hung on, limping to the finish line for top-15 performances.

Truex, last week’s winner, wound up being the goat during Sunday’s wreckfest. He triggered the big crash on lap 171 that ultimately collected a whopping 16 cars. Among them was Kyle Busch, his second straight week of misfortune that threatens to derail a strong season. He’s now on the outside looking in on the playoff picture heading to Kansas.

Blaney and Kevin Harvick survived that Big One but wound up inside the garage after a crash with just 11 laps to go. Both remain in position to make the Round of 8, but their survival is far from guaranteed. From Harvick, fourth in the standings, to 10th-place Kenseth the gap is just 23 points.

The only driver who seems out of it for sure is Chip Ganassi Racing’s Jamie McMurray. He didn’t even make it out of the first stage, crashing on lap 25 after getting turned by Erik Jones during initial green-flag stops. McMurray now sits 29 points behind Jimmie Johnson for eighth in points and would almost certainly need a win at Kansas to advance.

Last week Penske was so bad at Charlotte that I said to stick a fork in them; they were done as far as the championship is concerned. This week I’m whistling a different tune. Though Brad did indeed win a race of attrition, he had a competitive car all day long. Brad has a history of shooting himself in the foot…. speeding on pit row, taking a fool’s gamble, etc…. but he also has the talent to get the job done. Can I have my fork back?

I’d put Brad right up there as one of the best, if not the best driver on track. Way to go 2 Crew! Loved seeing you in Victory Lane! I was so excited to see 2, 22, and 21 together on track, at least for a little while. Joey threw an awesome block for Brad on the final restart. Team Penske is going to be the team to watch next year.

Not getting excited at all, plate race…the other tracks tell the true story. Time will tell if Penske is “back”.

Although Logano put on the best show yesterday, along with 59 laps led, that does not always equate to a win. Brad better mention his teammate and often, he owes him for this win. IMO. Team orders for someone in the jerky playoffs, someone not? I think Logano gave him the stage 1 racing….for points. I am not the only one who thinks that way, PLAYOFFS! LOL.