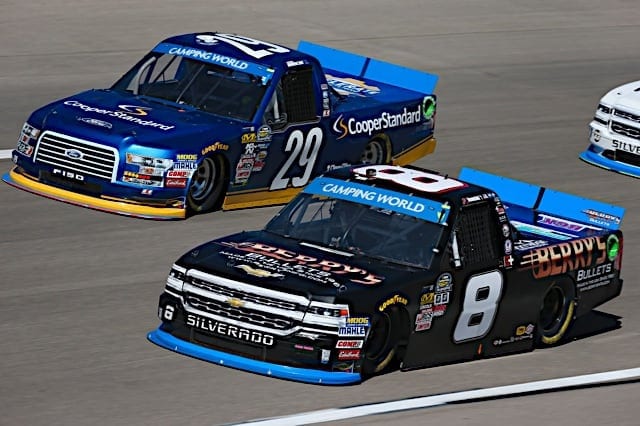 There wasn’t a dull second for John Hunter Nemechek or Chase Briscoe Saturday at Talladega Superspeedway.

Entering the weekend’s Fred’s 250, each driver had one goal in mind: survive and advance in the Camping World Truck Series playoffs.

However, it didn’t take long before the unpredictability of ‘Dega bit one of these young drivers, as Briscoe began leaking fluid, brining the No. 29 to the garage on lap 7.

Returning to the track nine laps down, Briscoe eventually finished 22nd, unable to climb back into the top six in points to advance.

“It would’ve been a heck of a story,” Briscoe said of the near-comeback. “John Hunter had his issue… we could definitely taste it.”

In a season that has included seven top five and 11 top 10 finishes, Saturday was a brutal disappointment for one of the title favorites entering the playoffs.

With Briscoe’s team, Brad Keselowski Racing, closing at year’s end, the rookie is particularly down, having the championship run end in the Round of 8.

“As much as I want to give Brad [Keselowski, owner] this championship, we still have four races. It definitely is hard to look at the positives right now. Even though we’re shutting down the end of the year, we’re still fighting.”

For Nemechek, Saturday may have ended with a playoff spot in the Round of 6, but it was anything but easy. Suffering damage in a lap-55 crash, Nemechek brought his No. 8 to pit road to repair damage. Here, his playoff future was beginning to be put in doubt.

However, with playoff contender Briscoe, along with Kaz Grala being taken out in a crash on lap 20, the window had stayed open to advance despite the trouble.

Kaz Grala Crashes Out of Truck Series Playoffs in Talladega

“I’m pretty sure we were in pretty much every wreck there was today,” Nemechek said. “I was aware the No. 33 wrecked at the start and the No. 29 had troubles. Other than that, we were focused on getting to the front. Crew chief said near the end to finish 12th or better and we got sixth.”

Later involved in the last-lap crash that ended the race under yellow, Nemechek managed to come through to finish sixth, enough to out-point Briscoe by only eight markers.

“This year, we overcame and never lost faith,” he said. “This feels great. This was our goal. I’m really looking forward to the next three rounds of races.”

With two wins and seven top-five finishes in 2017, bad luck has hit the NEMCO team hard, having eight finishes of 20th or worse this year. Advancing to the Round of 6 despite the inconsistency, Nemechek is proud to have the team behind him.

“It’s just been an up-and-down season,” he said. “We’ve always overcame adversity in these races. This team never gave up and I never gave up on them.”