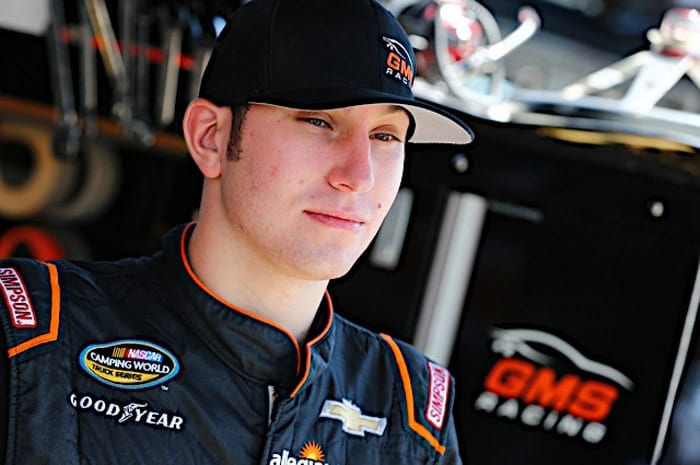 Plate racing is what started Kaz Grala’s championship hopes… it’s also what ended it in 2017.

Kicking the Camping World Truck Series season with a win at Daytona in February, Grala came into Saturday’s Fred’s 250 from Talladega Superspeedway below the cutoff in point to advance in the playoffs. Those hopes became shattered when he crashed into the frontstretch wall on lap 18, the final lap of Stage 1.

Following a stack-up effect, which spun Chris Fontaine and ended Ryan Truex‘s day, Grala couldn’t see any of it before nosing into the outside wall.

“All I could see was spoiler from the guy in front of me,” Grala said. “He started checking up, I rubbed him a bit and I got plowed from behind. That was it.”

The crash was the end of a tough day for the GMS Racing rookie, as he suffered a failed engine in qualifying. Starting from the rear f the field, he rallied to the top 10 before the wreck.

“That certainly played a part in it,” he said of the engine issue. “I firmly believe in qualifying we would’ve been top three, so we would’ve been up front and we wouldn’t have been back there in position to have a torn truck.”

With a 29th-place finish, Grala, despite no championship hopes for 2017, will focus on grabbing another win to close out the season.

“I’m proud of our efforts, we did everything we could do,” he said. “It’s too bad our championship hopes have ended this week. But we have a few more races to dig.”

Last week's winner @benrhodes also involved in this early crash. Team working to repair damage to the rear of the truck. #NASCARPlayoffs pic.twitter.com/PCAoXHQUpg