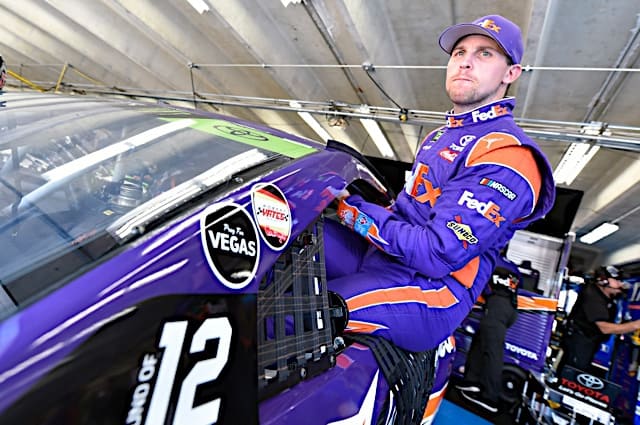 Every October, qualifying takes a twist come Charlotte Motor Speedway in the playoffs… we turn on the lights.

The twist also caused a surprise Toyota to make its way to the front.

During Friday night’s qualifying session, it was Denny Hamlin who scored the pole for Sunday’s Bank of America 500, ripping around the 1.5-mile track in 28.184 seconds (191.598 mph). It’s the 25th pole of Hamlin’s Monster Energy NASCAR Cup Series career and first of 2017.

“We hit our balance just right,” Hamlin said. “The good part about our car is that we seemed to be a tiny bit faster every run when a lot of guys started backing up. That was the key to us getting the pole.”

Matt Kenseth lined up second, coming up just 0.016 seconds short of the top spot. Still, it was a Joe Gibbs Racing front-row sweep for Sunday.

“We saved our best lap for last,” Kenseth said. “I was pretty conservative most of the time and got a good lap in the third round. Got a little too aggressive coming to the line which probably cost us the pole.”

Kevin Harvick led both Rounds 1 and 2, earning the moniker of the “one to beat” heading into the final 12-driver session. But a pole was not in the cards, as Harvick didn’t get to the line like he wanted to on his up-to-speed lap.

“Our cars have had speed in two of these first three [playoff] races,” Harvick said. “These types of tracks, we’ve made [headway] on speed. We have to capitalize here.”

Another driver scratching his head Friday night was Jimmie Johnson, who missed the second round altogether to qualify 25th, last among the 12 playoff drivers. And after another rough Friday for 2017, Johnson was somber after the continued streak.

“Multiple trips through inspection doesn’t help,” said Johnson, who missed precious minutes in the garage going through pre-qualifying tech. “Another frustrating Friday, unfortunately. It sucks to be behind. We’ll just have to get to work on Sunday.”

Kyle Busch just made it to the track to start Round 1 and advanced through to qualify fourth. Clint Bowyer rounded out the top five while Brad Keselowski, Chase Elliott, Kurt Busch, Kasey Kahne, and Kyle Larson completed the top 10.

Danica Patrick advanced to the final round of qualifying for only the third time of 2017, starting 12th for Sunday.

Not a bad qualifying effort for so little time in this car. I look forward to tuning on it some more. We have 30min hold in final practice.

.@dennyhamlin taking home a new piece of hardware and the starting position at the #BofA500! #BoNight2k17 pic.twitter.com/ogpk9JkGpC

Johnson doesn’t get out of the first round and is out-qualified by Danica AGAIN? And he thinks he’s THE GOAT? Not in my book.

Add to that being out-qualified by his two has-been teammates.