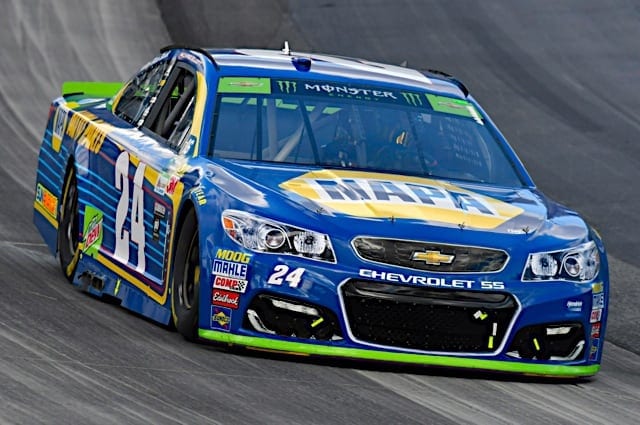 Chase Elliott in the No. 24 (Photo: Nigel Kinrade/NKP)

NASCAR released the 2018 Monster Energy NASCAR Cup Series rules changes this week, and they were minimal in comparison to recent years.  Was it the right call to stay consistent, or should more tweaks have been made?

Amy Henderson: No matter what NASCAR did, fans would complain. Keeping the package similar was the right move. There are new inspection procedures in place for next year, and teams have to work with the new engine rules as well, so throwing the kitchen sink at it could really put them behind, especially the smaller teams with only a few employees. Yes, I’d like to see the cars go back to a valance eventually and get them up off the ground, but let teams get better with what we’ve got first.  However, perception is reality in terms of what people see, and I hope that NASCAR will take a hard look at whether one manufacturer has an advantage, and if it does, take steps to fix it.

Christian Koelle: NASCAR made the right move to keep things consistent next season while the sanctioning body focuses on the new inspection process. It’s better to focus on one thing and perfect it than focusing on a few different things and having flaws throughout. Inspection has been a big deal as of late, and this new photo enforced inspection requires all of the attention. I am looking forward to the changes for the 2019 season, and we haven’t even finished 2017 yet.

Michael Massie: Despite everyone’s disapproval, the splitter remains a thing. Get rid of it already! With these minimal changes, expect for clean air to still reign supreme and for plenty of snoozers next year. Anyone that has a case of insomnia should be prescribed a dose of watching NASCAR with this current rules package.

Vito Pugliese: The rules changes are actually pretty significant, particularly with regards to the new engine rules. You’ll see more attrition in races due to parts failures than what we’re currently experiencing, and one manufacturer or engine supplier is bound to come up with a solution better than the others, while some may struggle early on. It adds a new element and dynamic that we haven’t seen in recent years.

With every car so much alike and running similar speeds, this could help cure the lack of on-track passing throughout the field. Still a bit miffed that they’re insisting on keeping the splitter and not returning to a standard valance. Part of me wonders if it’s truly an aerodynamic concern, or if it’s more of a sensitive issue with the sanctioning body not wanting to admit that splitters and wings don’t work on stock cars. They got rid of the wing after all, but not the thing the air sees first.

The sport lost Hall of Fame car owner and engine builder Robert Yates to cancer this week. What should race fans take away from Yates’ storied career in the sport?

Koelle: I had the opportunity to shake hands and speak with Yates earlier this season at Charlotte Motor Speedway. He was clearly one of the icons of the sport and has led to the engines we have in the sport today. I remember the days watching NASCAR where Robert Yates Racing was always one of the top teams in the industry with Elliott Sadler, Ricky Rudd, David Gilliland, etc.

Massie: Yates was one of the last of his breed. He was a man’s man, a pioneer and someone who worked from the bottom floor (or should I say from sweeping the floor) to the top. Any new owner that has entered the sport in the past 20 or so years is nothing like Yates because they are often a bunch of rich businessmen buying teams with family money. The average fan can’t relate to most of the owners today, but they sure could relate to Yates. His team was not as successful as his competitors, Hendrick Motorsports and Richard Childress Racing, but his Nos. 28 and 88 took the sport by storm and shook things up in their short time out there.

Last year, I found an Ernie Irvan No. 28 hat in a Goodwill store, so I had to grab it. I wore it to a concert in Charlotte earlier this year, and I was surprised how many people between the ages of 20-35 came up to me and said, “That hat is f—ing awesome!” These people were either children or had not yet been born when Irvan raced for Yates, but that No. 28 was so iconic that everyone with an ounce of NASCAR knowledge knows it.

Pugliese: Yates was a self-made man who worked his way up as an engine builder, ultimately buying the team he worked for. He sold everything he owned and moved into a small apartment when he bought the No. 28 team; you would never see anyone make that kind of commitment today. Among the last of his breed, he powered Dale Jarrett from a rudderless journeyman to a Cup champion, two Daytona 500 wins and a Brickyard 400, nearly pulled Dale Earnhardt away from Chevrolet, as well as powering Richard Petty to his 200th win ironically, against the car upon which he would ultimately build his legacy. His name is every bit as synonymous with horsepower in NASCAR circles as Waddell Wilson, Randy Dorton and Maurice Petty.

Henderson: I’ll always remember watching races in the late 1990s and early 2000s and feeling like every single week a Robert Yates Racing driver had a chance to win. While there were teams winning more races, RYR was always a threat because of those Yates engines. I read somewhere that even before he has his own company, drivers knew when they had his power under the hood over other builders because his were that much better. Yates retired a decade ago and handed the reins to his son Doug, but the name Yates is synonymous with horsepower in NASCAR today because of his skills. Every time a Ford driver wins a race, they can thank Yates for what he started.

The XFINITY Series faces its first playoff cuts on Saturday in Charlotte. Who makes the cut, and is there a clear title favorite emerging?

Massie: Something will happen to Matt Tifft on Saturday that will knock him out and allow for Ryan Reed and Brendan Gaughan to make it. I don’t see Michael Annett, Blake Koch or Jeremy Clements doing anything; they have lacked the speed. If this race was held on the Charlotte roval, then the four that would miss it would have an excellent chance to make it. Justin Allgaier is looking like the title favorite. He has looked fast for the past few weeks, and the No. 7 building momentum.

Henderson: The four below the cut line (Gaughan, Annett, Koch and Clements) stay there based on season-long performance, but Gaughan is just two points behind Reed, who hasn’t been much more consistent this year, so that’s your battle. As for a title favorite, I]Allgaier looks more and more like one every passing week.  We all know a lot can happen between now and Homestead-Miami Speedway, but Allgaier looks more like a favorite every week.

Koelle: With three drivers entering Saturday’s race in a must-win situation, I don’t see much changing on the cut-off line. Clements hasn’t had the speed, performance or equipment to battle with the higher-funded teams, which isn’t really a surprise. Koch, though, has really surprised me, He almost made it to the final four next season, but with a few more competitive teams in the series it’s made it a little tougher. If anyone steps up, Koch will do it.

Chase Elliott scored his fifth career runner-up finish at Dover International Speedway but hasn’t broken into the win column yet.  Will his first win happen in 2017?

Pugliese: I will be shocked if it doesn’t, and Charlotte is the perfect place to put No. 24 back in victory lane with a first time winner. While some criticize Chase Elliott for being too hard on himself, it’s refreshing to see somebody humble and not blaming the circumstances for his defeat. Not outburst or temper tantrums, just a realization and evaluation of what went wrong and how to fix it next time. Mark Martin finished second six times before he won his first race. If Elliott is in that category, he’ll be just fine. The wins will come, the big thing is to support him and maintain his confidence in himself, the team and his equipment.

Henderson: Yes, if he can keep the momentum he’s built in the last couple of weeks.  The first win is taking a while, but once it happens, he’s going to be a weekly threat. I wish I could say he’ll reel off multiple wins at exactly the right time, but It’s hard to deny the Toyota advantage right now.  Elliott has the look of a driver about to go on a tear, but he needs the car to do it.

Koelle: Elliott has already exceeded expectations in the playoffs by making it to the next round without any wins. Two top-five finishes in the playoffs tells me his win is just around the corner, especially since both of those were second-place finishes. If the victory comes, it’ll be at Talladega Superspeedway or Martinsville Speedway, both tracks where we saw a strong No. 24 car. I would like to see Elliott win in the No. 24, but it really doesn’t matter whether he wins in the Nos. 24, 9, 5, 1, 2, 3, etc. A number is a number, and Chase Elliott is Chase Elliott. Not his father, not Jeff Gordon, he’s Chase Elliott, and that is a big issue we are having with him. We all know Bill Elliott was great and Gordon was great, and I want to see Elliott earn his own legacy. That is what worries me about him winning in the Nos. 24 or the 9: that we will automatically attach someone else’s legacy. Elliott will get his first win this year.

Massie: Elliott has finished second in two of the past three races (granted, one was encumbered). The way to win a race is to keep running in the top five. Something will fall his way before the end of this year and he will join Gordon and William Byron (predicting it now) as drivers to win in the No. 24.

your mother
Reply to  richie

The golly gee shucks act is wearing thin. Put away those Archie comic books you silly little brat. The 50s are over and you weren’t part of them.

It is nice to see his integrity and I know he will be a force to recon with. He has come a long way this year. He doesn’t whin or cry foul when things don’t go his way. He will be a legend in his own right.