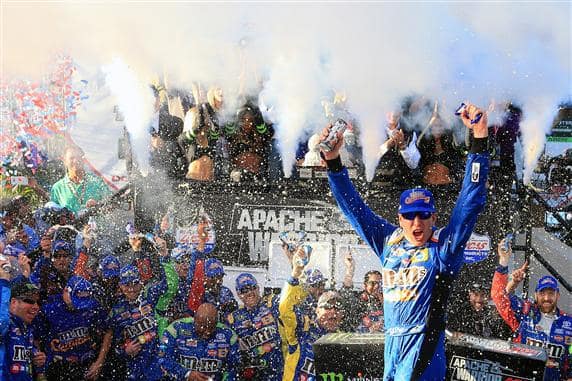 Sunday’s race at Dover International Speedway trimmed the Monster Energy NASCAR Cup Series playoff field down to 12 drivers.  However, three racers have clearly separated themselves from the rest of the pack.

Martin Truex Jr., Kyle Busch and Kyle Larson have established themselves as the drivers to beat in 2017.  The road to the championship goes through them.

NASCAR’s dominate triumvirate is not a product of Dover alone.  All three drivers have been making their cases as championship favorites for several months.  During the regular season, Larson and Truex combined to lead the overall points standings for 23 of the 26 weeks.  All three drivers have won 13 races combined this season: five for Truex, four for Larson and now four for Busch.  Jimmie Johnson is the only other driver with more than two wins in 2017.

The real advantage of Truex, Larson and Busch is their playoff points.  Heading into the Round of 12, Truex has 59, Busch has 41 and Larson has 34.  That equals 134 playoff points among the three of them.  Compare that to the rest of the nine remaining playoff drivers, who hold 97 playoff points combined.  Unlike the previous three years, in which all drivers began the round of 12 on equal footing, race wins and stage wins from earlier in the season have given Truex, Busch, and Larson a big advantage.

In some ways, the 2017 season is starting to feel like 2010.  That year’s postseason also had three drivers who emerged as the top championship contenders: Johnson, Kevin Harvick and Denny Hamlin.

Hamlin was the big winner of the season, taking a season-best six victories in the playoffs.  Harvick was the picture of consistency, who had led the points standings for 16 weeks before the postseason reset.  Then there was Johnson, who had five regular season wins and was trying to break his own record of consecutive championships.

Three races into the playoffs, those three drivers had already begun to distance themselves from the rest of the field.  Johnson was the only one to win in those three events, and enjoyed a eight point advantage over Hamlin and 30 point gap over Harvick.  Nobody else was within 50 points of Johnson.  After more races, Hamlin had won and stood 14 points behind Johnson.  Harvick was lurking 38 points back, and everyone else was over 200 points behind Johnson.  The 2010 championship fight had become a three-horse race.

Fans who remember the 2010 season no doubt remember how the final three races played out.  Hamlin won again at Texas Motor Speedway, elevating him to the points lead.  But the following week at Phoenix International Raceway, Hamlin had to make a late pit stop for fuel, while Johnson cruised to a top five.  Hamlin maintained at 15-point lead, but the failed pit strategy appeared to rattle him and the No. 11 team.

The season finale at Homestead resulted in Hamlin getting caught up in an early incident, while Johnson rolled to a record fifth consecutive championship, defeating Hamlin by 39 points and Harvick by 41. Carl Edwards, who won the final two races, was the only other driver within 300 points of Johnson.

The current triumvirate of the Monster Energy NASCAR Cup Series can look to 2010 for lessons on how to approach this championship battle.  Hamlin arguably had the most raw speed during the playoffs, but Johnson’s ability to finish off races was what ultimately earned him the championship.

Finishing off races will be the key to winning the title for Truex, Busch, and Larson.  Truex and Furniture Row Racing went through a lot of growing pains early on in their relationship, bringing fast cars to the track only to see wins slip away late in the race.  Busch struggled to reach victory lane early in the season, often expressing his frustrations through a series of one-liners like “everything’s great,” “balls and strikes,” and “I’m not surprised by anything.”  Larson has had a career year thus far, but also a lot of second place finishes that could have been wins.  With as close as those three drivers are performing, the one of them who executes the best at Homestead-Miami Speedway will probably be the champion (assuming the they get to Homestead in the first place).

Furthermore, even if all three drivers do reach Homestead, there will be at least one other driver joining them.  Any playoff driver who wins in the round of eight will find themselves tied with any of the other drivers who will compete for the championship in the final race.

That could be the biggest difference between 2017 and 2010.  Once Johnson, Hamlin, and Harvick established themselves as the title favorites, they only had to worry about each other, at least to an extent.

NASCAR’s current playoff format, however, features multiple resets.  Truex, Busch, and Larson will never be able to fully separate themselves from the remaining playoff drivers.  They might be each other’s primary focus, but there will always be at least one other driver looking to play the spoiler all the way to Homestead.

The final seven events of the 2017 MENCS season will feature three races.  First is the race between Truex, Busch, and Larson to establish a title favorite.  Second is the race to stay in the playoffs and avoid the cuts at Kansas and Phoenix.  But the third race could be the most intriguing of all.  The race for the championship might be a three-horse race now, but unlike 2010, it is not guaranteed to stay that way.  Who among the other nine playoff drivers can take down NASCAR’s triumvirate?

Does anyone really care?

Ricardo
Reply to  Don in Connecticut

DoninAjax
Reply to  Don in Connecticut

Tony
Reply to  Don in Connecticut

Fewer and fewer people week by week it appears.