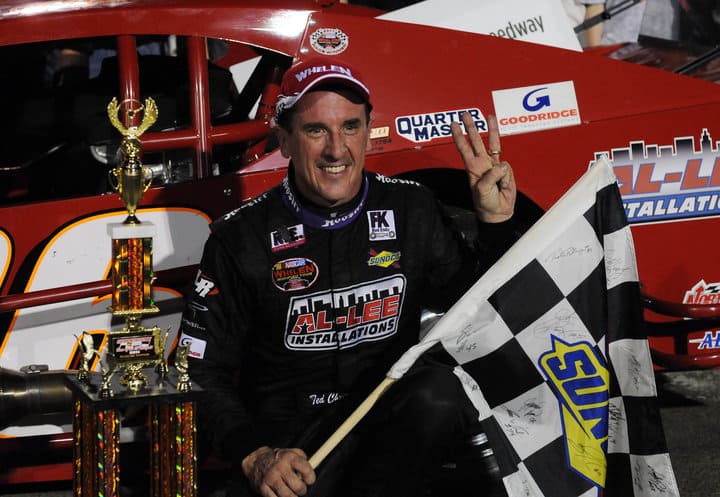 Following the news that Whelen Modified Tour legend Ted Christopher died Sept. 16 in a single-engine plane crash in Connecticut, at the time en route to the Riverhead 200 at Riverhead Raceway, there was an outpouring of support and kind words from racing fans across the world on social media, at local racetracks and more.

And last weekend at New Hampshire Motor Speedway, where multiple NASCAR series competed, there were a number of tributes to Christopher at track.

There are a few tributes to Ted Christopher here at @NHMS. This is a small sampling of them. pic.twitter.com/T6uL1jKTCq

This is the official Ted Christopher in memorial decal, running on all NASCAR National Series vehicles this week, on @StewartFriesen’s 52. pic.twitter.com/0bFnbS64Tg

With a week’s time for the reality of the situation to seep in, the Whelen Modified Tour racers are still racing with heavy hearts.  However, they’ll never forget Christopher.

For Bobby Santos III, winner of Saturday’s F.W. Webb 100 at Loudon, Christopher was more than just a competitor, he was his favorite driver in the world.

“My very first time in a modified at New Smyrna [Speedway], I think I was 14,” Santos continued.  “It was one of those situations where [Christopher] took advantage of me.  He got a flat tire and needed a yellow.  He was running second or third, and I was running eighth or 10th.  I was going to go by him, [but] then Teddy hung a left and came across my nose.  I spun out, he got the yellow, came in and changed his tire.  That’s just one of many.”

Christopher’s mentality and his reach is how Doug Coby will remember him best.

“[Christopher] would let you know how he felt, that’s for sure,” Coby said.  “He was the only guy walking through the pit area that everyone had something to say to him.  Whether you were a media member, a crewmember, a driver.  He had a one-on-one relationship with everybody he loved and everybody he hated.  That’s unique about him that he had so many people who disliked him who he engaged with on a regular basis.”

“With Ted, he’s a very, very, very hard charger,” Tomaino said.  “[He] ain’t going to give you an inch.  There are articles where he said he wouldn’t give his mother an inch to win if he were racing her, and that’s the way Ted raced. God love him, that’s the way he was.”

As for Chase Dowling, he came into the Modified scene toward the end of Christopher’s career, but he still has his own memories of the veteran racer.

“[Christopher] taught me a lot,” Dowling said.  “He had a great passion toward racing and a great appreciation toward the sport.  I’ll never forget him. He raced me the hardest, but he never wrecked me.”

Whelen Modified Tour and ROC Modified veteran Patrick Emerling has a number of memories of Christopher.

“He was always there and always a real hungry driver,” Emerling said prior to Saturday’s UNOH 175, where he was making his Truck Series debut. “We’ll miss him being around. He’s a guy who had a lot of success throughout his career. I dream of having the career that he had.

“He was a great driver and one heck of a racer. He was… the definition of what a racer was. He did his homework with everything he did and did everything to the fullest extent.”

Monster Energy NASCAR Cup Series veteran Ryan Newman has never been a regular on the Whelen Modified Tour but has cherrypicked races in the series over the years, which allowed him to compete against Christopher often.

“My best memory, and one of my first memories was at New Smyrna,” Newman recalled.  “He passed me for the lead, and I passed him back to win the race. We had a lot of good races over the years.”

These are just a small collection of the collective memories that competitors in the Whelen Modified Tour have of Christopher, but one can rest assured that there are plenty more memories of him, both good and bad.  Either way, Modified fans in New England likely will never forget the man.

My favorite memory of teddy was one year at race o rama he drove my minisprint in a ROC race.
He destroyed the field with the same set up that I’d only managed a third place with in my feature.
That memory is even better than the time i beat him in a go kart at the woodstock fair.
I’ve since move on from new england and miss the mods, thompson and stafford dearly.
I’ll miss teddy even more but will never forget the drive that guy had.