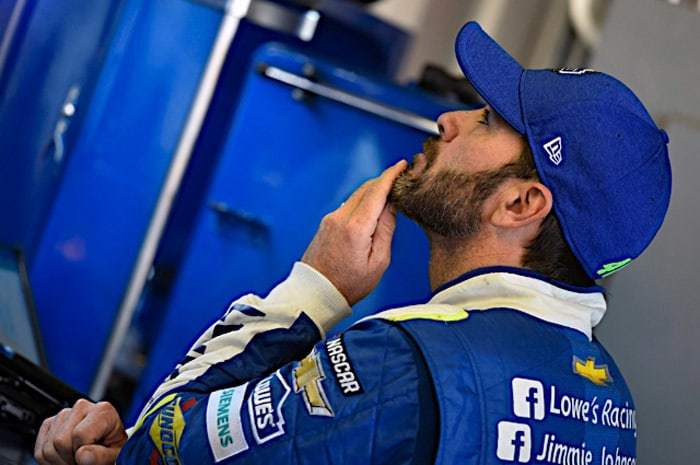 The big news this week were the departures of Danica Patrick from the No. 10 and Aric Almirola from the No. 43.  Who ends up in those rides?

Michael Massie: It seems a given that Aric Almirola will get in the No. 10 and Darrell Wallace Jr. is the new No. 43 driver. I love the Wallace move, as he has loads of potential, but Almirola is a bad selection for Stewart-Haas Racing. At one point, Almirola was an above-average driver, but ever since his wreck at Kansas Speedway, he has looked scared behind the wheel. I can’t say I blame him; he went through a horrific ordeal. He is just not the guy to turn that team’s performance around.

Amy Henderson: It’s pretty much a given that Wallace will be in the No. 43 unless a sponsor comes forward and offers big bucks to put in someone else.  All indications have Almirola going to SHR along with Smithfield.  It will be interesting to see what he can do in better equipment, Almirola has shown he can run in the top 15 often enough in his current less-funded ride that he could put together some good runs, which the No. 10 team needs. I don’t see him as a title contender or anything, but he is an upgrade in the driver’s seat. Wallace is a solid driver with a great personality that a sponsor should be lucky to have, but whether he will attract backing is still a big question.

John Haverlin: It’s fairly safe to say Almirola will end up in the No. 10 next season. First Smithfield announces its move to SHR, and it would only make sense if it took the driver that has represented the company on the track the last few years along, too. Wallace will probably go to the No. 43 Chevy (assuming the rumors of the Richard Petty Motorsports-Richard Childress Racing alliance are true). What I now wonder is, how competitive could Almirola be in SHR equipment? And with Kevin Harvick, Clint Bowyer and (possibly) Almirola signed for 2018, who gets the No. 41 Ford?

Without sponsorship or a ride lined up for 2018, Danica Patrick’s future in NASCAR is in jeopardy. Would her departure have an impact on the sport?

Henderson: It will have a much bigger impact than people think. The conversations that happened on social media about Danica Patrick being Hall of Fame-worthy was a bit overboard, but she has brought a lot of kids, particularly girls, into the sport as fans, which is something that NASCAR has struggled to do in recent years.  That’s huge, folks. There is a risk of losing some of those, which would be a shame.  Patrick barely made a ripple on the racetrack, but don’t underestimate the splash she made with the fan base.

Haverlin: If Patrick left the sport, it certainly wouldn’t be the worst thing that could happen. Yes, maybe some younger fans and those who like to see a woman racecar driver might lose interest, but Patrick has underwhelmed throughout her entire Cup career. If anything, the average race fan might be happy to see her leave because she couldn’t be competitive with an organization built to win championships. Overall, there’d be a slight impact, but it’s definitely not going to be the end of the world.

Massie: Not really. What had a negative impact on the sport was her underwhelming performance for the last five seasons. She caught the attention of a lot of people when she entered NASCAR and let everyone down. It is time for another woman to try her hand at NASCAR.

The Cup Series playoffs kick off Sunday at Chicagoland Speedway.  Who was the biggest surprise to not make the cut?

Haverlin: If there’s anyone out there who predicted Joey Logano would not make the playoffs this year, I’d like you to come forward and pick out my lottery numbers, please! Logano has been one of the sport’s best drivers since joining Team Penske in 2013. He’s won a Daytona 500, made the playoffs every year he’s driven the No. 22 and has been a Championship 4 driver twice. Ever since the encumbered Richmond Raceway victory, his team has just looked pathetic. That’s certainly not what I expected.

Massie: Derrike Cope… just kidding. It has to be Joey Logano. If you had asked me who I thought was going to win the championship at the beginning of the year, Logano would have been at the top of my list. He would have won it last year had Carl Edwards not came down on him on the second-to-last restart at Homestead-Miami Speedway. A fraction off of a measurement and a weird rule kept him out of this year’s playoffs. Oh, and he isn’t in a Toyota; if he drove one of those then he would absolutely be in.

Henderson: Absolutely Logano is the biggest surprise as far as not winning his way in.  The other one that I found surprising was Bowyer, in that he should have been able to point his way in, and the reason he didn’t was because of a couple of surprise winners, like Austin Dillon.  While neither is a real title contender in any case, Bowyer is more worthy of racing for the title than Dillon.

XFINITY and Camping World Truck series playoffs fields get set this weekend in Chicago.  Will we see any surprises for the final spots?

Massie: Things will stay the same in the XFINITY Series race because the Cup guys with less than five years of experience will stink up the show. The Truck race will be interesting. Noah Gragson and Justin Haley are the two drivers who have been running well lately that could potentially win and steal a spot in the postseason. I look for Chase Briscoe and Ben Rhodes to hang on or possibly win, though.

Henderson: I don’t think so, though I agree that the Truck Series has a better chance of a shakeup if Gragson or Haley can squeeze in a last-minute win. In XFINITY, I can see Brendan Gaughan or Michael Annett grabbing a win before Dakoda Armstrong just based on equipment, but I think the fields are pretty well set.

Haverlin: Doubt there will be any surprises in the XFINITY playoff grid. I wouldn’t count on seeing any first-time winners at Chicagoland. Unless Gaughan or Annett has a disastrous race, they’ll make the cut. As for the Truck Series, the only driver that could make the playoffs who isn’t in the top eight already is Gragson. He’s won two poles and earned three top fives this season, so we know he can be fast. He’ll have to put together a near-perfect performance on Friday, though.

“Patrick barely made a ripple on the racetrack, but don’t underestimate the splash she made with the fan base.”
So Amy are you making the case that these fans tuned in every week just because of Danica and then watched the entire race even though most weeks she was mired in 25th place or worse? I doubt that and if you aren’t watching the races (and the stupid advertisements that go with it) then you don’t really count. Since ratings and attendance have continually declined during the last 5 years, it doesn’t seem like the “Danica effect” was as significant as some are making it out to be.

” He would have won it last year had Carl Edwards not came down on him on the second-to-last restart at Homestead-Miami Speedway.”
That’s not my recollection Michael. My memory remembers Carl Edwards leading most of the race and poised to win as the race winded down until a very questionable caution was thrown by NASCAR which jumbled up the running order. Then on the restart the Edwards/Logano contact happened.

Geez, I hate when people bend the facts just to make them support their argument.

How many little girls sit and watch 4 hours of NASCAR every week? Must be millions. What bothers me is how NASCAR and the Television people have relentlessly promoted this arrogant and entitled driver like s warn and fuzzy pet. These calculations in my opinion have diminished racing as a sport. It’s been like a bad dream. Check out the winning ladies of the NHRA. Danicant is a joke.

Actually I have been of the thought that Danica’s impact was more about her looks then talent.
Joanna Long I always thought was a better driver in lesser equipment.
That being said I think Danica has done a disservice to future gals in racing

You’re right. Long outqualified Princess Sparkle Pony in the Saturday shows on more than one occasion, and shined in equipment that cost less than Patrick made in one weekend. Five years in SHR equipment, Long would’ve at least won a race or two.

I think its a bit presumptuous to believe that Smithfield who, according to them, left RPM because of a lack of performance, will take continue to support the driver that underperformed. Perhaps they will but I wouldn’t put a lot of pictures of dead presidents on it.
While the rumors of RPM and RCR are out there, remember earlier that RPM said they wouldn’t be merging with another team. But it wouldn’t be the first time that necessity caused a change of plans.
Danica’s leaving will disappoint a lot of people who have had for the first time a reason to have at least a casual interest in Nascar. But, like every other driver who has left the effect will be temporary. Casual fans will move on to the next interesting thing, will the more serious will attach themselves to someone else.

To me the real interest is how many team will survive to be on the track next year. Drivers can always be found, and the PR types can build an image, but without something to drive?

How many times did Danica qualify faster than Johnson?

Here’s a question to ponder on two relevant stories this season.
What has been more underwhelming: Danica’s stint in NASCAR or the Dale Jr. retirement season?