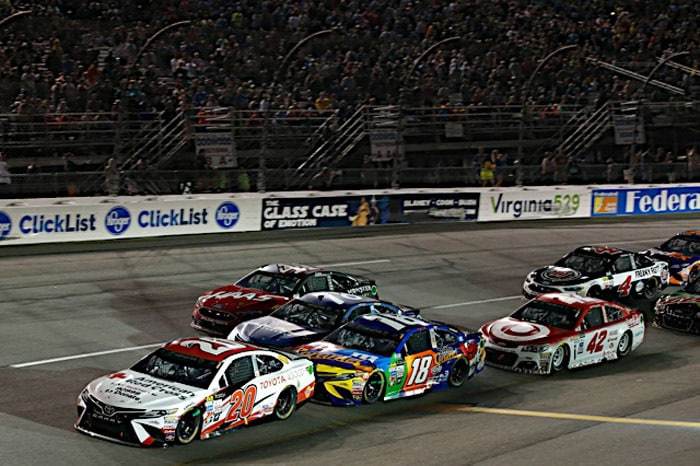 Spending some time in the land of if’s for a moment here, Saturday’s Federated Auto Parts 400 could’ve ended a whole lot differently. Some misfortune for others changed the game in a race that was ultimately won by Kyle Larson.

Let’s start with one of the oddest incidents of 2017. Pole sitter and early race dominator Matt Kenseth was forced to jam on the brakes, hitting the back of Clint Bowyer while avoiding an ambulance truck parked by pit road entrance. Though others caught some damage from the jam-up, Kenseth, one of the quickest cars all weekend, received the worst in this mid-race incident.

The No. 20 broke a radiator from the impact, ending the pole sitter’s night in the 28th spot. If Kenseth was around for the ending, perhaps Martin Truex Jr. and Larson would have had another close competitor in the final stages.

Another driver who fell victim to tough luck exiting the Virginia short track was Truex, who led the most laps of the night in his No. 78 Toyota (198 of 404). But the continuation of a season-long tread up front came to a quick close at the brisk wave of the yellow flag with two laps to go. That’s when the lapped car of Derrike Cope hit the wall in turn 3, catching the eye of track officials. The contact wasn’t serious but NASCAR deemed it enough to put the race into overtime.

With Truex frustrated at the call to turn the race yellow, the night turned from sour to rotten when Larson beat him, both on pit road and on the final restart. Denny Hamlin then tipped him into the wall on the white flag, adding insult to injury. Instead of Truex getting crowned regular season champion in Victory Lane he left with a crashed race car.

Larson should still feel good this week; in the end, he made the moves necessary to win the race and benefitted from a bit of good luck. Problem is, too much of it may have come from the NASCAR officiating booth down the stretch, leaving fans seething about the race’s outcome days later. – Zach Catanzareti

Sunday morning, Motorsport.com reported that Smithfield is expected to leave Richard Petty Motorsports (RPM) following the 2017 season. The team has yet to make an announcement on their future plans as both sponsor and driver contracts are expiring.

Rumors have been swirling throughout the garage during the second half of the season that Smithfield could be going to Stewart-Haas Racing with Aric Almirola or a current SHR driver. Though the latter is yet to be determined, according to reports, the sponsor is taking its money to SHR.

In addition, according to Motorsport, once RPM notified Smithfield that they wanted Darrell Wallace Jr. in the famed No. 43 car next season, the sponsor backed away.

Smithfield has been Almirola’s primary backer for the majority of the past six seasons since aligning with RPM. During that time, he brought the No. 43 car back to Victory Lane at Daytona in July of 2014. The team had been improving early in 2017 after scaling back to a single-car effort in the offseason but suffered a setback when Almirola fractured his vertebrae in a wreck at Kansas Speedway in May.

Wallace was among the drivers who filled in and did an admirable job in Almirola’s absence. But for either driver to be a part of the effort in 2018, primary sponsorship is needed. – Dustin Albino

Friday night’s Virginia529 College Savings 250 was dominated by Brad Keselowski and Kyle Busch. The No. 18 got away on the short runs, but the Team Penske machine caught Busch on the long runs, ultimately scoring the victory.

Keselowski picked up his fourth career XFINITY win at the Virginia short track and first since 2013. But what was notable about this battle was its lack of controversy. Whenever these two hard-nosed drivers are close together, it’s must-watch action due to their war of words and distaste toward one another. But this one ended cleanly once the No. 22 car got around Busch for the lead late.

In the past, Sadler has admitted joining JR Motorsports rejuvenated his long career in the sport. But when you look at the numbers, they are unreal in terms of putting the No. 1 team ahead of the XFINITY competition. He’s earned 47 top-10 finishes in his last 58 races driving their Chevrolet while earning three victories (although Sadler’s still searching for his first win of 2017).

Between the 33 races last season and the opening 25 this season, Sadler has been out front of the championship standings in all but 16 races, never falling below fourth. He is poised to make a run at the title beginning in two weeks at Kentucky Speedway. – Dustin Albino

A couple of weeks ago, TKO Motorsports announced that Memo Gidley will race a Porsche 911 GT3 R in next weekend’s Pirelli World Challenge GT season finale at his home track, Sonoma Raceway.  It will be Gidley’s first major race since being seriously injured in the 2014 Rolex 24 at Daytona.

The Sonoma weekend will not be Gidley’s only major race of the season, though.  Last week, he was announced as part of a new effort in the Continental Tire SportsCar Challenge.  Gidley will make his series debut in the Grand Sport class driving Motorsport USA’s No. 14 Maserati GT4 alongside Cavan O’Keefe and Michael McAleenan.

It is a completely new effort.  The Maserati GT4 has never raced in IMSA (although there is one full-time car in Pirelli World Challenge’s GTS class for JCR Motorsports).  Motorsport USA has also never competed in the series and McAleenan has no career starts there.  O’Keefe does have some experience in the series, running with Rebel Rock Racing, but that experience was in the Street Tuner class.

The Mazda Raceway Laguna Seca 240 is the second and final endurance round for the IMSA Continental Tire SportsCar Challenge.  Four hours of racing, plus practice and qualifying should give the driving trio plenty of time to get used to the new surroundings.  The race is due to start at 5 p.m. EDT on Saturday, Sep. 23 and will be live streamed at both IMSA.com and FansChoice.tv. – Phil Allaway

Can’t imagine health food fanatic Danica encouraging people to eat bacon. But then this is NASCAR and stranger marriages have been known to occur.

Bill B
Reply to  Al Torney

I believe it’s Kurt Busch that they are are lining up for Smithfield.

Although it could work for Danica. Everything tastes better with bacon in it.

It appears that the falling away of the non mega teams will continue with RPM. Although they have escaped before how many times can they convince someone, be it another manufacturer, or sponsor, to step in at the last minute?
perhaps we will now see the true value of a charter.