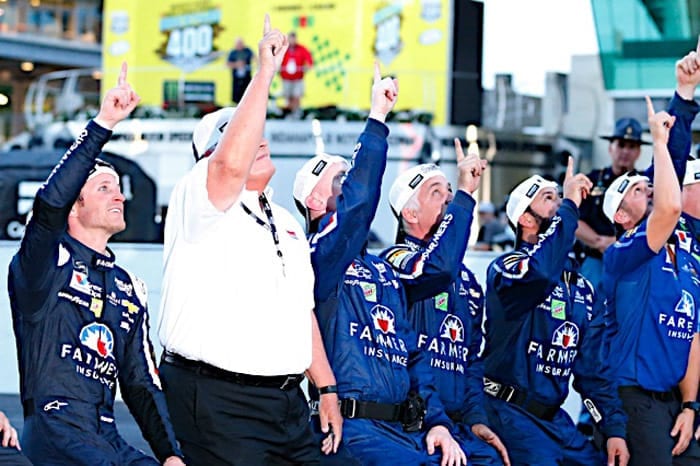 ONE: Massive Win for Kahne

I have a good friend who is a huge Kasey Kahne fan. He’s from the same home town –Enumclaw, WA — as the 14-year, 488-race Hendrick Motorsports veteran, and he’s followed Kahne’s career from the very start. He is, if you will, the definition of a die-hard fan. This past week, when I sent him my column, he wrote back saying he had been scared to read in the past few weeks because he was worried I would be writing negatively about Kahne’s longer term prognosis in the Cup Series. I told him I wouldn’t do that in his honor but truthfully didn’t believe a word of what I wrote. I figured that particular “point” was coming sooner rather than later.

Then, as I watched the waning laps on Sunday evening, my wife seeing Kahne at the front of the field started asking me about how long it had been since he last won. I told her not to worry as it wasn’t going to happen. Little did I know.

“I think a win like today can give myself confidence and momentum, our whole team a boost, which is something that we need,” said Kahne in the post-race media conference. “We work hard, too. But the guys that are winning and running up front, their momentum, their confidence is tough to keep up with when it’s been a couple years.”

Now the truth is Kahne’s future at HMS is cloudy at best (sorry, Jason!), but this win could be just the tonic he needs to finish up 2017 in the best possible fashion.

In what cannot be construed as a surprising announcement, news reaches us that Dale Earnhardt, Jr. will be joining the NBC broadcast team next season.

“It is a tremendous honor not only to join NBC Sports next year but to begin a new career alongside people who love NASCAR as much as I do,” said Earnhardt in a media release.

And you can’t help but feel Junior will fit in well alongside Rick Allen, Jeff Burton and former crew chief and good buddy, Steve Letarte.

“I will devote my heart and soul to this broadcast team and pledge my very best to the millions who watch it,” noted Junior of his future career and you can bet your bottom dollar that this will indeed be the case.

When I wrote about Junior moving to the broadcasting side of things a few weeks back, there was a mixed reaction in the comments which did, to some degree, surprise me. I am firmly in the positive camp with this news and I expect Junior to take to the mic with great dexterity following in the footsteps of his former teammate Jeff Gordon. Junior is about as much a NASCAR lifer as you can possibly get and I for one am delighted to see him take the next steps in his post-driving career. My money is on him being a great success.

This column has always been – and will always be – about celebrating the unexpected great results for the drivers in, shall we say, less than top echelon equipment. So, with that in mind, this week my shout out goes to Matt DiBenedetto, who picked up his third ever top 10 at Indianapolis Motor Speedway. DiBenedetto, who drives full time for the Go Fas Racing team, finished eighth for his second top 10 of the year; the other came in the Daytona 500 when he finished ninth. Go check the Go Fas Racing Twitter feed if you want to revel in the joy of what this finish means. For example:

We're not used to this. So cool for a small team. pic.twitter.com/2KXAufeRoK

Too often in NASCAR we’re caught up with who won and where the big boys finished that we fail to celebrate the results like this that, to all intents and purposes, are as good as a win especially at a non-restrictor plate track (or should that just be a regular track?) So well done, Mr. DiBenedetto, here’s to more success for you and the team before the season is done.

FOUR: Next Up, Pocono Part Two

Next up, we head back to Pocono Raceway for the second and final time in the 2017 Cup season. This will be Cup race number 80 at the two-and-a-half mile, three turn flat track, a streak that runs all the way back to 1974 and a race won by the King himself – Richard Petty. When we last raced at the circuit in mid-June, the race was won by Ryan Blaney for his first (and to date only) top echelon victory, holding off a charging Kevin Harvick in the final laps.

One big piece of recent Pocono-related news has happened away from the track with Brandon Igdalsky resigning his position at President and CEO to take up an opportunity with NASCAR as the Managing Director of Event Marketing and Promotion. Nick Igdalsky will take over as CEO while Ben May will assume the role of President.

“I am very grateful and excited,” noted Igdalsky. “I have observed every aspect of the operation here at Pocono Raceway, starting as a 13 year old, and look forward to working with our incredible team. Our goals remain the same: to create exciting and lifelong experiences at a beautiful and sustainable facility and that will remain our focus.”

Best of luck to the new leadership team and here’s hoping for a great race this weekend.

And finally this week, a quick shout out to Timmy Hill who picked up a career best 14th-place finish amidst all the late race carnage this past weekend. Driving for journeyman racer Carl Long in his third race of the year (and 200th in total across all three series), Hill has an average finish of 35.4 and a previous high of 27th (twice in 2013 at Charlotte and Pocono). Hill expressed his excitement, where else but on Twitter.

He also took the time to speak to us here at Frontstretch, noting: “I just want to keep working away….I embrace what I do. We don’t have all the funding and resources but I certainly embrace what we do. Hopefully, one day, I can get that opportunity.”

Let’s hope that is the case for Timmy but in the meanwhile, well done, sir. Well done.

Yeah, the Junior entitled snarkiness will continue..well because he is Junior and it is his world and we just live in it. His booth bias will be strong, he will stutter, he will not articulate a complete sentence, or if he does, it will take till the next commercial break. Booth bias is a disease that just got worse! THE CDC has no cure! His ego does not allow him to go home and shut up! “Concussion” my okele, party boy did not want to do it anymore, and it would have crushed the ones that still believe he is DALE SR! And that would not be good for NASCAR…I’m thinking Rick and Brian thought! Gotta keep the T SHIRT SALES STRONG! MO!

I’m just curious, and this is a serious question. Why is there such a different approach to evaluating Dale Jr.’s time at Hendricks vs. Kahne’s time at the same organization? Dale has 9 wins in 9 years with HMS. Seven of those wins came in two years, leaving just 2 wins for Dale over a 7 year span. Dale had three seasons in a row with zero wins and overall 5 winless seasons (including 2017). Dale won 2 races in his first 5 years with HMS. Kahne has 6 wins in 5 years with HMS and two winless seasons. This season, in the same equipment, Kahne has more points, more top 5s and more top 10s than Dale. So enlighten me, why the seeming double standard?

Now, now, now…you know the answer to that. Hypocrisy does not count…remember?

I’m glad Kasey got the win, I really am. But with both of his sponsors leaving at the end of this season i think sponsors will force Rick into bringing young Byron up next year. Check who knows, maybe both of Kaseys present sponsors will reup if the rising star is driving the 5. I want to see Byron in Cup with HM S next year. Also Rick & Jr better get together quick and get Christopher Bell signed for junior motorsports in Xfinity for next year. Sign him for 3 years, 2 with Jr’s team then bring him to cup in a satellite the third year which may be Jimmie s last. Bell is a for sure winner.