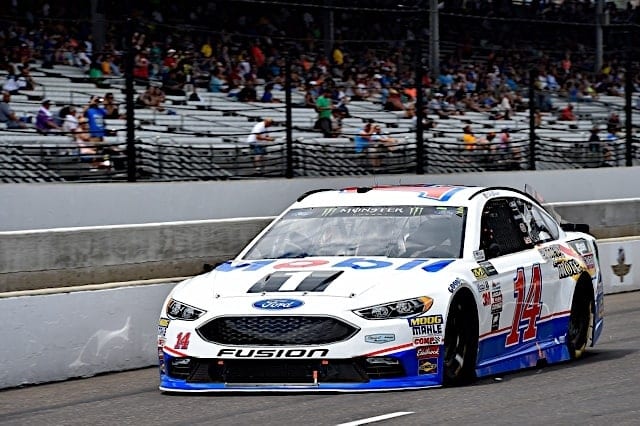 There were plenty of hits in Sunday’s Brickyard 400, but perhaps Clint Bowyer had the hardest.

Spinning into the inside frontstretch wall with 10 laps to go, Bowyer was near inches away from impacting the pit road wall, instead bouncing back into traffic and getting smashed by non other than his Stewart-Haas Racing teammate Kurt Busch.

Exiting his destroyed No. 14 Ford, Bowyer said it was too quick of an incident to avoid as Danica Patrick and Paul Menard made contact in front coming off Turn 4, causing Bowyer to break loose.

“He was getting hit pretty hard, they got together and he made an evasive move,” Bowyer said. “I didn’t know the No. 77 [Erik Jones] had a run oun me there.”

Boowyerb hit left-front first into a SAFER barrier wall before the impact from Busch.

“All hell broke loose,” he said. “It was a hard hit, felt like a hard hit. Then somebody hit me… I don’t know, felt like it did. It pretty much sucked.”

Before the wreck, Bowyer was gaining from his slow start to the weekend, starting 18th and moving into the top 10 on occasion.

“We were a bit off and found a way to make it better,” he said. “I thought we’d have a single-digit finish.”

“It was definitely not needed,” Bowyer said of his playoff situation post-Indy. “We’ll re-group, this is a strong team. I’m proud of the No. 14 team.”

When I looked up and saw Bowyer spinning I just figured he had poison ivy again and was trying to scratch it and inadvertently change the outcome of the race.

Reckless Bowyer didn’t know Erik Jones was there, duh. You caused the wreck Clint, own up to it. Patrick and Menard didn’t wreck, just you body slamming Jones. No wonder you haven’t win since “2012” , think of that, no wins since 2012 Clint. Long time.