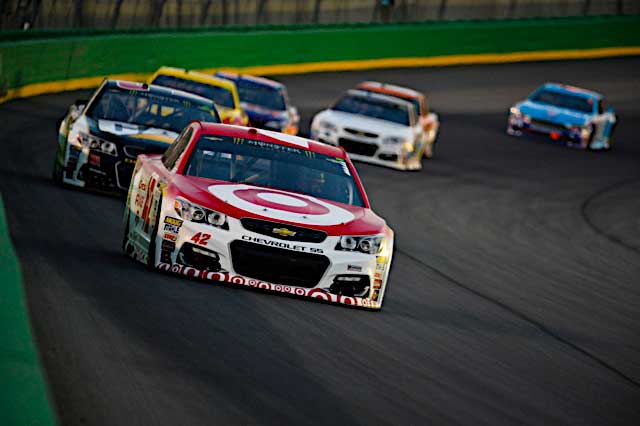 Kyle Larson was going to enter this upcoming weekend at New Hampshire Motor Speedway as the Monster Energy NASCAR Cup Series points leader … or so he thought.

NASCAR revealed that the No. 42 car had been assessed a 35-point penalty for a rear brake cooling assembly violation. It was discovered after his second-place finish this past weekend at Kentucky Speedway.

“The race finish is encumbered per Section 12.10 Encumbered Race Finishes,” the NASCAR penalty report read. “Ductwork or other devices are not allowed to pass from one area of the interior of the vehicle to another or to the outside of the vehicle.”

From the rulebook, this is the rear brake cooling assembly. Area in question for Larson penalty are the hoses in the upper right. pic.twitter.com/QF6DiyaEpZ

New to this season, the points leader at the end of the regular season will be awarded 15 playoff points. Second place will be awarded 10. Larson held a one point advantage over Martin Truex Jr. But after the penalty, he now trails the No. 78 by 34 points.

Chip Ganassi Racing released a statement that was short and sweet. “We accept the penalty and will move forward,” the statement read.

Larson’s No. 42 started last in the Quaker State 400 after failing to pass inspection prior to qualifying. Larson backed up his crew chief and team, saying he would rather them push the limits than stand idly by.

As of press time, CGR has not announced who will step up to replace Johnston during his absence.

Wonder why this wasn’t caught in the first inspection before qualifying, and what did they find that kept him form making a qualifying attempt?e

I wonder how long they’ve been getting away with it.

I hope Larson kicks Truex’s behind in the playoffs, and crushes Truex at Homestead!

Truex is an ass. Not a fan of anybody named Kyle either. Weird season so far.

Looks creative to me and God knows NASCAR MUST stamp out creativity! Some clever team might get an edge! Can’t have that in an era of segments and Waltrips and most of all, Brian!!!!!!

I think the penalty is B.S., there should be clearer rules, and if a violation should have been caught during inspections. Definitely took away too many points to help their pick Truex win! Hope Larson wins anyway!