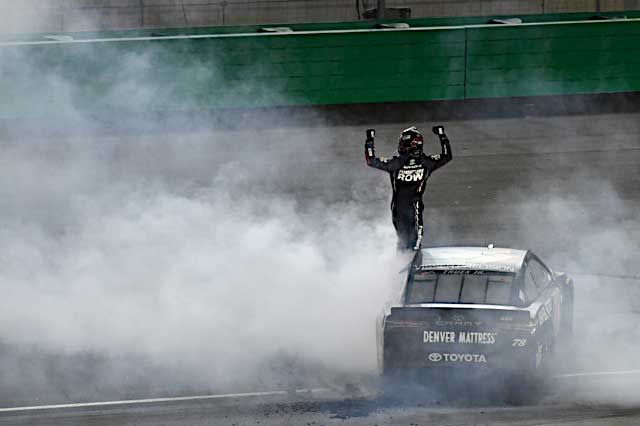 Truex far outclassed the field, winning all three stages of the race. Both Larson and Kyle Busch spent time up front, with Larson coming from the back of the field after not making a qualifying lap due to inspection issues, but no driver had anything for Truex, even when a late-race caution set up a dash to the finish.

The first stage was incident-free, with the only yellow flag a competition caution after heavy rain on Friday.

Several wrecks slowed stage two, though, including a collision between Brad Keselowski, Clint Bowyer, and Jimmie Johnson during stage two. Keselowski and Johnson would have their nights ended by the wreck, but Bowyer would continue. Kasey Kahne and Trevor Bayne would also collide only a few laps later, and neither would finish the race. Bayne did get back on track, but spun a few laps later, ending his race. Joey Gase also had a single-car incident during the stage.

As the laps wound down in the final stage, Truex was able to put all but a handful of cars a lap or more in arrears, building a lead of 15 seconds with a handful of laps remaining, a half-lap worth of distance.

Truex, though, had a scare at the end of the race, as Kurt Busch lost the engine on the No. 41 with two laps to go, bringing out the caution and sending the race into overtime. Every car except the No. 78 pitted for tires, leaving Truex admittedly worried, but he still blew the field away on the restart, leaving Larson, Elliott and Kyle Busch to duke it out for second.  Matt Kenseth and Daniel Suarez got together coming to the white flag, bringing the yellow out and ending the race.

The Monster Energy NASCAR Cup Series returns to the track on Sunday, July 16, when they head to New Hampshire Motor Speedway for the Overton’s 301 at 3 P.M. Eastern. The race airs on NBCSN and PRN.

I’ve said it before, and I’ll say it again, I would love to be there to witness the super secret dissection of Truex’s Toyota when they get it back to that research center in Concorde, North Carolina. I bet they give it a real going over, just like they would if it have of been a Penske Ford (or any Ford for that matter). Ya, sure!

The cars of Mr. H get the same inspection, but without the penalties.

I don’t have cable anymore so couldn’t watch. Did stumble on the na$car.com chopper cam page. Wanna know how empty the stands are –go there & look at raw / near real time shots unedited by bzf or nbc. I’m surprised they live stream it, frankly.

I watched the race on TSN in Canada, but only watched to the end of the first stage. The place looked about 60-percent full, and that’s being generous. BZF wouldn’t care about showing the crowd last night, as Kentucky isn’t owned by I.S.C. Besides, he most likely was passed out in a bar in Daytona.

A dull boring race. Fell asleep on the couch sometime during the 3rd stage, woke up to see the postrace interview with Truex. So guess I didn’t miss anything.

Don in Connecticut
Reply to  russ

They are all dull and boring except for the road races and short tracks and even those are becoming very tedious with this “segment” nonsense. Sad.

Why was there a TV time out…er, competition caution? There was a Kyle Busch benefit earlier putting down rubber.

I think we all know the answer to that…
To create another restart opportunity since the racing on 1.5 mile tracks is often lack-luster.
To keep drivers that sucked from falling a lap down too early and having their fans tune out
To show more commercials.
You know, the usual reasons.

The Diva got the Lucky Dogette award.

Yep. She could stay on the lead lap for about 28 laps which worked out perfect for her on that competition caution. She also took the wave around towards the end of stage two (Newman and Menard as well,, actually all the RCR cars were really out to lunch last night). The long green flag run couldn’t save her in stage 3 as she got lapped just about the time green flag pit stops started.

There were only 8 cars on the lead lap at the end of the race, so I think your comment lacks merit.

Check the history. How many times have there been 20 cars on the lead lap half way through and 30 plus at the end. There weren’t as many free passes and wave arounds as Brian tries to arrange in this “event.” Wait til next week and watch and learn.

Bill B
Reply to  Lynne

That was what I liked most about the race (9 cars on the lead lap). Not being a fan of any one driver, I like it when drivers that suck during the race get the finishes they deserve and drivers that excel get the good finishes the deserve. Too many times with all the lucky dogs and wave arounds, drivers that suck get propped up by the entitlement programs and get finishes they don’t deserve, while those that deserved better finishes (based on how they ran the entire race) get shuffled back by multiple double file restarts that turn the final running order into a crapshoot. Once you fall a lap down it should be very difficult to get that lap back unless you have a good car/driver.

I question that as well. Xfinity race was earlier in the day so there should had been enough rubber on the track, and it didn’t rain between the two races.

Do you mean the Kyle Busch charity event where he pockets all the donation?

When they put out the commercial breakdown they obviously didn’t include the constant ads in the scoring banner that probably would take it to almost the whole “event”. It’s almost as bad in baseball with the ads between pitches.

And how many times was the Harvick once a year Mobil one oil shown yesterday? that commercial was shown every commercial break from 5 pm on here in Atlanta. Talk about over kill.

Nobody dominates in Nascar forever. whatever the 78 has discovered is obviously not shared with JGR, nor should it be. soon there will be a new rule relegating the 78 back to the pack. I do have to congratulate them though whatever they found they have been keep to themselves for two years