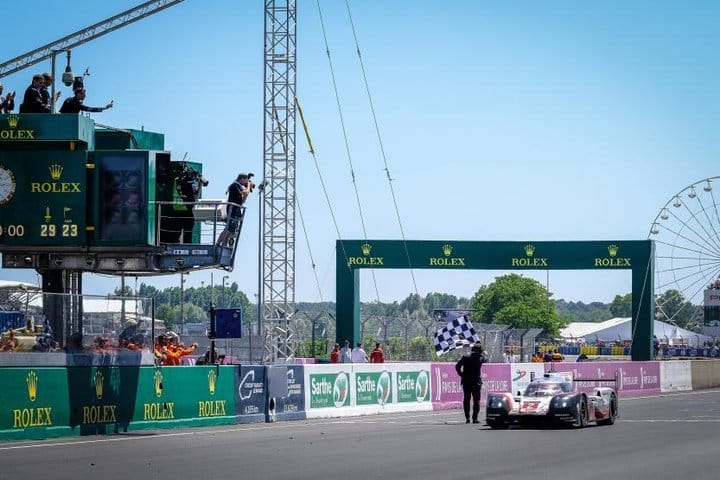 On Sunday morning, Porsche LMP Team’s No. 2 Porsche 919 Hybrid of Earl Bamber, Timo Bernhard and Brendon Hartley claimed overall victory in the 85th running of the 24 Hours of Le Mans.  The victory was somewhat improbable due to the amount of time that the team lost in the first quarter of the race.

In the third hour on Saturday, all hope for Porsche LMP Team’s No. 2 entry seemed to be lost.  The MGU failed on the Porsche 919 Hybrid, forcing the team to the garage for nearly an hour.  By the time the No. 2 car returned to the race, they were down in 56th-place overall.  Meanwhile, the No. 1 team ran flawlessly while the Toyotas faltered.

First, the No. 8 car broke its own MGU and had to spend significant time in the garage.  Then, the race-leading No. 7 Toyota with pole sitter Kamui Kobayashi driving lost the clutch and had to retire from a three-lap lead in the 10th hour.  Shortly afterwards, the No. 9 was forced to retire over contact with the Cetilar Villorba Corse Dallara that led to ripped up bodywork and a dead battery.

The race looked like it was going to be an easy victory for the No. 1 Porsche of Neel Jani, André Lotterer and Nick Tandy.  Then, disaster struck for the No. 1 car.  In the 21st hour, the No. 1 lost oil pressure while circulating with a 13-lap lead.  The race was over right then and there.  The No. 2 Porsche ran flawlessly after the MGU issue and took over the P1 lead afterwards.  However, Jackie Chan DC Racing’s No. 38 ORECA 07-Gibson shared by Oliver Jarvis, Thomas Laurent and Ho-Pin Tung took the overall lead.

Running as normal, the No. 2 Porsche was roughly eight seconds a lap faster than the No. 38 ORECA 07.  However, the Jackie Chan entry developed overheating problems late that forced the No. 38 team to slow to 10-15 seconds off the pace of the No. 2 Porsche.

For Bernhard, the whole situation was amazing.

“It feels surreal,” Bernhard said after the race.  “When I joined Porsche as a junior driver back in 1999, I carefully developed the dream to perhaps one day get the chance to fight for overall victory at Le Mans. I hoped I would be good enough to really do this one day. Now, 18 years later, we have achieved it together. The final lap was very emotional for me. It will take some time before I realize what has happened.”

For teammate Bamber, it is his second overall victory at Le Mans after having teamed up with Formula One racer Nico Hulkenberg and Tandy to win in 2015.  It was no less incredible for the Kiwi racer.

“I can’t believe we’ve managed to pull this one off having been at the back of the field after an hour in the pit-box,” Bamber said.  “Both Brendon [Hartley] and Timo [Bernhard] have been part of the Porsche LMP programme from the beginning while this victory is as much down to the guys in the pits. Without their hard work we wouldn’t have got back racing again so this win is down to them.”

For the No. 2 Porsche, their margin of victory in the class was a full nine laps over the sole remaining Toyota, the No. 8 of Sébastien Buemi, Anthony Davidson and Kazuki Nakajima.  The No. 8 Toyota ended up ninth overall.  The other four LMP1 entries were not classified as finishers.

In LMP2, the ORECA 07-Gibsons were the class of the field all weekend and the race itself was no different.  Much of the event was dominated by the Vaillante Rebellion entries.  The No. 31 entry of Julien Canal, Nicolas Prost and Bruno Senna traded the lead with the No. 13 of Mathias Beche, David Heinemeier Hansson and Nelson Piquet Jr.  However, both teams ran into problems during the overnight hours, allowing the No. 38 Jackie Chan DC Racing ORECA to take the class lead.  The run was not without trouble as Laurent had slid off-course and hit the tires at Indianapolis early on, resulting in a nose change.

With two hours to go, the No. 38 was looking good for the overall win.  Overheating problems resulted in the pass for the win with 66 minutes to go.  However, Tung was able to hold on for the class victory, staying on the lead lap until there were only seven minutes remaining in the race.

Jarvis, Laurent and Tung’s margin of victory was two laps over Vaillante Rebellion’s No. 13 ORECA 07-Gibson.  The No. 37 Jackie Chan DC Racing ORECA 07 for Alex Brundle, David Cheng and former Champ Car racer Tristan Gommendy was another lap back in third.

Signatech Alpine Matmut’s No. 35 Alpine A470-Gibson for André Negrao, Nelson Panciatici and Pierre Ragues was running second in class late, but a trip to the gravel trap late dropped them to a fourth-place finish.  United Autosports’ No. 32 for Filipe Albuquerque, Hugo de Sadeleer and William Owen finished four laps in fifth, best non-ORECA.

GTE-Pro was a toss-up for much of the race.  Corvette Racing’s No. 63 of Antonio Garcia, Jan Magnussen and Jordan Taylor spent nearly the entire race on an alternate pit strategy.  However, that strategy put the No. 63 car with Taylor at the wheel in the final hour.  However, Taylor had Aston Martin Racing’s Jonny Adam close behind.

Adam made a move to the inside at Arnage, but then went wide.  Taylor was able to repass, but not before making contact with just over five minutes to go.  That contact may have decided the race.  Taylor was leading until he went through the trap at the second Mulsanne chicane half a lap later.  Adam was able to make the pass stick exiting the Ford Chicane to start the final lap.

From there, Adam pulled away to take the GTE-Pro victory for himself and teammates Daniel Serra and Darren Turner.  The margin of victory was 92.7 seconds over the No. 67 Ford Chip Ganassi Racing UK Ford GT of Pipo Derani, Andy Priaulx and Harry Tincknell.  The No. 63 Corvette was forced to settle for third after cutting a tire on the final lap.

In GTE-Am, JMW Motorsport debuted their new Ferrari 488 GTE at Le Mans.  The car replaces a 458 that the team had campaigned since 2009.  Despite the substantially different car, the team did not miss a beat.

The team of Robert Smith, Will Stevens and Dries Vanthoor dominated the class and rarely put a foot on their way to a dominant win.  The margin of victory was two full laps over Spirit of Race’s No. 55 Ferrari shared by Duncan Cameron, Marco Cioci and Aaron Scott.  Scuderia Corsa’s No. 62 for defending class champions Townsend Bell and Bill Sweedler, along with Cooper MacNeil finished third in class, more than two minutes behind the Sprint of Race entry.

Beechdean-AMR’s No. 99 Aston Martin finished fourth in class while the Clearwater Racing No. 61 shared by Matt Griffin, Weng-Sun Mok and Keita Sawa was fifth.  Four of the top five teams in GTE-Am were fielding Ferrari 488 GTEs, including the top three.

WEC teams now take a few weeks off to regroup.  Round No. 4 of the FIA World Endurance Championship is the 6 Hours of the Nürburgring, scheduled for Jul. 16.

The competition at Le Mans just continues to get better and better. Its hard to imagine a closer race anywhere than the GTE-Pro race. After 23 hrs and 58 minutes there were only a couple of car lengths between the Corvette and the Aston Martin. The Aston appearing faster but the vette with the advantage of being able to work traffic better. It appeared that the contact with the Vette was on his left rear wheel, but perhaps not. Regardless an excellent race.