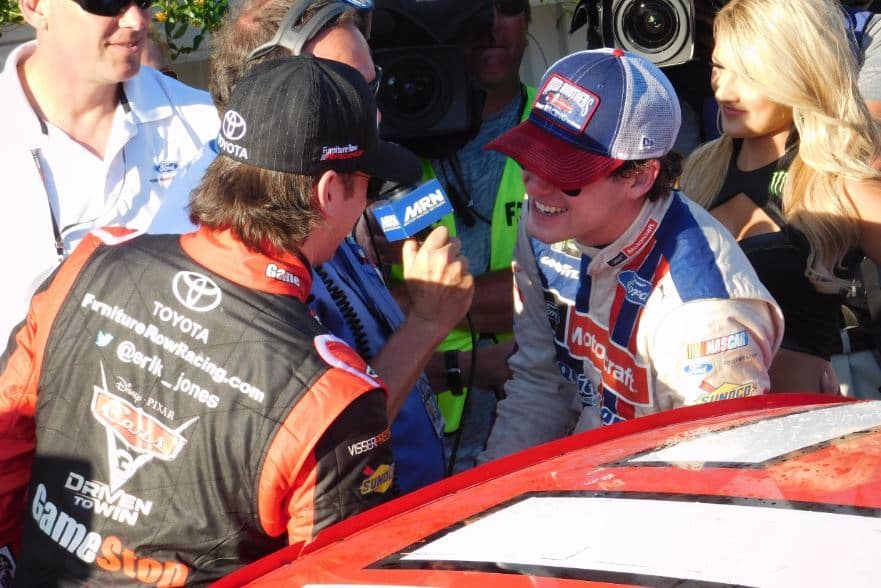 Three of the last five races in NASCAR’s premier division have witnessed first-time winners pulling into Victory Lane. As remarkable of an accomplishment as that is, it marks the start of what senior NASCAR executives have been waiting for.

The newest generation of the sport is arriving at the right time. As Dale Earnhardt Jr. retires and the rest of the sport’s most well-known names begin to hang up the helmet, a group of drivers need to step up as leaders in the world of stock car racing.

Fortunately, that day is here, as several drivers NASCAR has recently marketed more heavily, like Austin Dillon, Chase Elliott and Ryan Blaney, are starting to make names for themselves. Whether or not the sanctioning body will see the results that it wants to, which includes having these folks become household names like Earnhardt and Jeff Gordon, the success they are having on the racetrack against some of NASCAR’s veterans certainly cannot hurt.

But at the same time, it is all about risk versus reward. Why should NASCAR invest its marketing budget on drivers who aren’t proven? Until this five-race span, none of the drivers in NASCAR’s advertising campaigns were race winners. How can one say they are the future if they aren’t winning, especially those who aren’t rookies?

Well, NASCAR is a betting sport (just take a look at how much money people place each Sunday on DraftKings). And the sanctioning body is taking a big bet on the future, wanting to regain the composure it had in the mid-2000s, when ratings were sky-high and broadcasters didn’t have to lie about races being “nearly sold out” when a view from the blimp completely contradicts that statement.

Q: What is going on with the new generation of NASCAR drivers and their winning ways lately? – Lisa R., Charlotte

A: It’s pretty amazing to see the growth in some of NASCAR’s youngest drivers over the course of the past few years.

Led by Kyle Larson, the youth movement in the sport is exactly what is needed during a time when ratings have leveled out and tracks are looking for fresh, modern ideas to promote their events. Let’s face it — it’s something that is needed.

When Larson first came onto the Cup Series scene, his aggression reminded people of a young Tony Stewart, someone who isn’t afraid to make peers angry. Though he hasn’t found Victory Lane quite frequently in the sport’s top division, he continues to bring in fans thanks to a throwback driving style, featuring slick moves on the high line, along with the added bonus of being the only Asian-American driver in the sport at this time.

Besides Larson, there is NASCAR’s newest winner, Blaney, who represents as throwback of a feel as the Wood Brothers themselves. The way this man represents himself on and off the racetrack makes him unique, with a swag that fans young and old can understand.

With traditional NASCAR merchandise and a mixture of being a chill, relaxed guy, Blaney is someone who fans old and new can relate to. More importantly, his driving is still on point with his Team Penske peers, who have showed him how to climb the ropes in the Cup Series.

“We’ve had a bunch of new winners this year,” Blaney said after his first career win at Pocono Raceway. “So it’s a huge year for the rookies, and then Bubba [Wallace] making his first start this weekend. That’s a big deal. It’s nice to be part of kind of this younger group of drivers, and I think we’re all kind of coming into our own.

“So I think it’s pretty neat to just be part of the group. You always want to be part of the group, and luckily we’re able to finally get in Victory Lane because I’ve been pretty jealous of Larson and Austin and Ricky for them getting to Victory Lane, them being young guys, as well, and now we can finally add our name to that group.”

Now that the sport has a group of young drivers who are capable of winning, they can begin to market it accordingly. These young drivers have shown time and time again that they are strong racers with solid personalities.

Getting rid of the egg in the win column, they can move forward and generate not only more funding into the sport they love, but they can do something special and make NASCAR great.

So who will be the next driver to get their first win? Erik Jones? Elliott? Ty Dillon? Danica Patrick? Daniel Suarez? The list goes on and on as the sport continues to change and hopefully, grow.

A: There is no reason that Brad Keselowski should leave the team that picked him up when he was down. After getting the short end of the stick from Hendrick Motorsports, he recovered quite nicely.

Winning a championship isn’t so bad, and drinking a giant glass of beer isn’t either.

Keselowski’s stint at Penske is just getting started. He still hasn’t even reached the peak of his career. At 33, he is on his way to potentially building Team Penske’s No. 2 team into what it once was with Rusty Wallace. Imagine how special it would be for Keselowski to win another title with Roger Penske, who took a gamble on hiring him to drive the No 12 car in 2010.

His time at Penske is highlighted not so much by major wins, but timely ones. His one at Pocono Raceway in 2011 might be the most memorable, coming just days after a hard testing accident at Watkins Glen International. That triumph lifted the entire organization, beginning a streak of winning that hasn’t ended since.

While teammate Joey Logano is at Penske until at least 2022, if not longer, Keselowski’s future remains uncertain. The contracts for he and longtime primary sponsor Miller Lite each expire at season’s end. If Miller opts to not re-sign with Penske, it would end a streak of 26 years, spanning back to Rusty Wallace’s first year with the team in 1991.

“Roger has given me a lot and I have no reason to not want to stay with him,” he said during a Tuesday afternoon teleconference. “I can tell you that I’ve gone a long ways in my life and career with the help of Roger and all Team Penske and I hope to continue to do so.  So I think that’s all I can say really at the moment.”

With 22 of Keselowski’s 23 wins coming at the organization, there is no logical reason for him to leave, even if a team like Hendrick Motorsports hypothetically puts more money on the table to sign the former Cup champion.

The young drivers are certainly making their presence felt. But remember, it used to be that a driver had to spend some years driving for lower tier teams to ‘earn’ the seat in a top car. Jeff Gordon changed all that, so now the youngsters are getting in top rides much earlier.