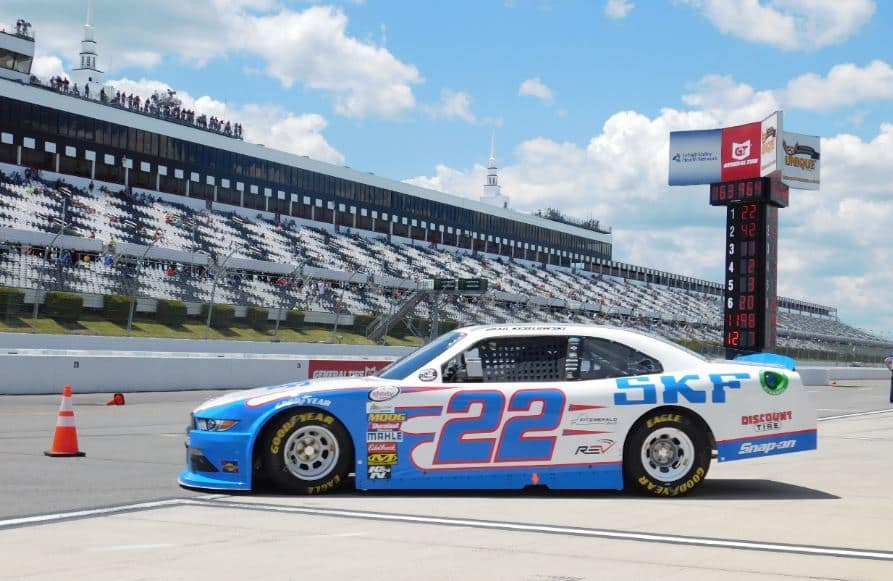 In a race that had it all– strategy, accidents and last lap passes, Brad Keselowski fought from behind in the final 15 laps to end the 46-race winless streak of the No. 22 Team Penske machine.

Keselowski started the event from eight, quickly making his way to the front, taking the lead from Kyle Benjamin on Lap 22, en route to winning the first stage. The second stage was much of the same, as the No. 22 team went on to win the second stage.

It all changed in the third strategy, as the strategy really began. Keselowski stayed out, while other drivers pitted. With 36 laps to go, the No. 22 team made their final pit stop, hoping to make it to the end using just two pit stops throughout the race.

With 22 laps to go, Brandon Jones blew a left rear tire going down the frontstretch, throwing a wrench on 10 drivers strategies. Cole Custer resumed the race as the leader, with Keselowski in second, but from the get-go, the No. 22 had to overcome adversity. Elliott Sadler bumped Keselowski out of the way in Turn 1, and later in the lap, he got in the wall off the Tunnel Turn, dropping him outside of the top 10.

“We were leading or second or whatever it was,” Elliott [Sadler] gave me a good push to clear the [No.] 00 but it carried all the way into Turn 1. I got down there and my rear tires were off the ground and went straight trying not to back it into the wall. Kind of a never give up. It felt like 30th. I drove by a bunch of cars and just pushed as hard as I could.”

Keselowski erased a five-second deficit in the final 15 laps to pick up his 35th career XFINITY Series victory by passing Kyle Larson on the final lap, as did Justin Allgaier.

Absolutely, this race at Pocono was one of the better races at Pocono in any series in recent memory. It had it all. But the talk going into it was how the Drivers Takeover would go, and I give it an A+.

Kevin Harvick, Joey Logano and Clint Bowyer did one helluva job in the booth, calling the race. Going in, there was no telling what the three of them, especially Bowyer would say. At times, his mouth is a loose cannon, but all three were spot on.

On pit road, there was Ricky Stenhouse Jr., who personally, I thought had one of the best pre-race pit introductions talking about a driver, in this case Darrell Wallace Jr. that I can remember in a long time. He out-performed even some of the professionals that do it on a weekly basis, at leas when it came to that.

Then there was Ryan Blaney, who performed well, and Erik Jones, who conducted an excellent interview with Chris Gabehart, crew chief of the No. 20 car, in which Jones has brought to Victory Lane twice this season. It was well done.

Denny Hamlin and Danica Patrick performed well in their roles hosting the event in the Hollywood Hotel. With help from Shannon Spake and Larry McReynolds, those two also over performed in their roles.

You’ve got to hand it to FOX Sports on this one, as it took some major cajones to let Cup Series drivers take over the broadcast. With the way it went, don’t be surprised if there is more of this in the coming years.

Unfortunately, Benjamin, who was having one helluva run in the No. 20 car finished 16th after spending 28 laps out front after scoring his first-career pole in just his second race.

As Keselowski was charging back through the field, he split a hole between Benjamin and Brendan Gaughan, forcing the No. 20 car into the outside wall. From there, it was all about managing the rest of the race, hoping the contact did not result in a cut tire.

“We had a great car all day and got a lot of experience out there, got to race around a lot of people and learn the aero a little better,” Benjamin said following the race. “We just got some damage a little bit on the left side on the last restart and it made it to where I was wrecking loose at the end the balance was out of whack and just didn’t have anything for them there.”

Benjamin’s next scheduled start isn’t until July 29, when the series tackles Iowa Speedway for the second time in just over a month. In his two starts this season, he has run in the top 10 for more than 90 percent of the races combined, but has an average finish of 24th to show for it.

Ugly does not define this race. There isn’t much to complain about as the parity in the series was well spread throughout the field.

Pocono is known as a track that is full of strategy, and that did not disappoint. Due to the lack of cautions, which a fan could look at a couple of ways played out better for some drivers, worse for others.

Gaughan began the race from 11th position, his third best qualifying effort of 2017. Running just outside of the top 10 through much of the first two stages, the No. 62 team picked up one stage point in the second stage through a variety of pit strategies.

But as the final stage began, Gaughan’s confidence began to build, and he became ultra-competitive, coming home sixth, his best finish since Daytona, when he brought home his only top-five effort of 2017.

“A really great crew chief and an awesome crew,” Gaughan said of how he brought his Chevrolet home sixth. “We were between a ninth and an 11th-place car all day, and it was good to run up there all day, but we weren’t good enough. Shane had the strategy that was right, and we had the best tires from the get-go, which is what he said. I wish we could have got a top five, but with the year we have had, we will take this sixth and keep on digging.”

Gaughan ran as high as second in the final stage, as late as 22 laps to go, until his teammate, Jones, brought out the caution. He, along with Allgaier, who finished runner-up, were on the same pit strategy and pitted on the final caution.

This is Gaughan’s second top-10 finish in the last three races, which gives him momentum going forward.

“Normally the summer stretch is where Shane [Wilson, crew chief] and I do our best,” he said. We’re just starting it off right and we’re going to try and keep up this momentum.”

Sure, Keselowski dominated, leading 29 laps, the most of all drivers en route to Victory Lane, but many Cup Series drivers saw stints out front though the different strategies.

Larson dropped from first to third on the final lap to pick up, yet another top-three finish. It’s his sixth top three in seven starts this season.

Daniel Suarez had an eventful day, but came home fifth, marking his fourth top-five finish in nine events this season. During a cycle of green flag pit stops in the final stage, the No. 18 car received a pit road penalty for speeding down pit road.

Ty Dillon was the only other Cup Series regular in the top 10, finishing eighth. His Richard Childress Racing teammate Paul Menard recorded a 31st-place effort, which is his best result in two XFINITY Series races this season. The No. 2 car recorded a fourth-place result in Stage 1, but lost control of his car following the conclusion of the second stage, smacking the inside wall.

“It’s nice because at the start of the year we couldn’t even put one race together.  It’s been a good stretch for us so far and we just want to keep it going through this 20-week stretch.” – Cole Custer

“We just need to finish in the top-10 every week and build consistency. We had struggles today and we fought back as a team and we were able to get back in the top-10, so I think that shows signs of improvement from where we were at the first part of the year.” – Matt Tifft

“I love these guys and I had a lot of fun this year, but it’s just circumstances and it’s the business to shut this program down.  We wanted to be a lot better than what we finished for sure.” – Darrell Wallace Jr.

Overall, this was one of the better XFINITY Series of races of the season. It had everything a fan could want in an event. Compared to the inaugural event at Pocono last season, which only saw 53 laps of racing before being halted due to rain, the racing was superb.

Yes, another Cup Series driver went to Victory Lane, making it 10 for 12 for Cup stars this season in XFINITY Series events. However, they had to work for this one. Allgaier, Benjamin and Custer combined to lead 55 of the 100 laps, which is the most since the season-opening event at Daytona.

Keselowski’s hard charge at the end made for some instant replay classic moments, splitting gaps and making holes that weren’t there. The No. 22 car put on a show in the final 15 laps coming from 12th to Winner’s Circle.

The XFINITY Series will head to Michigan International Speedway next weekend for it’s annual trip to the Irish Hills of Michigan. Suarez is the defending winner of the event, passing Kyle Busch on the final lap of the race to pick up his first career victory. The green flag is scheduled to wave shortly after 1;30 p.m. ET next Saturday, June 17.

…Take it up with Brian France.

This is the first Xfinity race I’ve watched this year, and it was only to see how the Cup drivers handled their “new assignments”. Overall, except for Danica and Hamlin, who sucked, everyone else weren’t bad. They did seem a little uncomfortable at first though. As was said, Harvick, Logano, and Bowyer didn’t show any bias, considering Custer is a Stewart-Haas driver, and Keselowski is Logano’s teammate. Besides, we didn’t have to listen to Motor-Mouth Mikey! As for the ones on pit road, again, the three of them seemed a little uncomfortable at the start, but, as the “show” progressed, they seemed to lighten up. As much as I can’t stand that Jones kid (he strikes me as being Kyle Busch 2.0), I thought he did the best job of the three, though, as I said, as the “show” progressed, Stenhouse and Blaney got more comfortable. Did Brad seem a little surprized seeing Blaney standing there with a microphone when he climbed from the car?

Danica and Hamlin were terrible in the Hotel. Both were totally out of place. Hamlin was so “dry”, it was hard to listen to him. And Danica, well, she really needed to take some course on how to handle public speaking. I always remember what Ned Jarrett said about when he won his first Championship, and was asked to do a public appearance with a local group. He was nervous, so he took a course to help him with public speaking (Dale Carnige (sp?)). He said it helped him immensely. Maybe during the off-season, some of these drivers should follow Mr. Jarrett’s example.

All-in-all, I thought it was a good experiment, one certainly worth trying again. And again!

Maybe they should use some Xfinity drivers during the Cup “event.” It couldn’t possibly be worse!