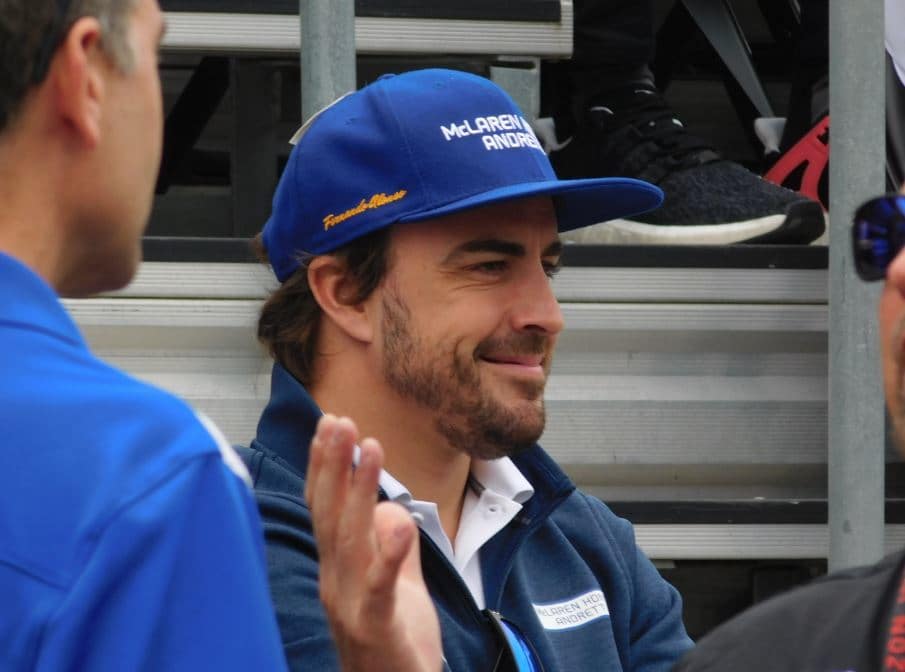 Fernando Alonso’s performance in this past weekend’s Indianapolis 500 impressed many. The Spaniard led 27 laps before his Andretti Honda engine expired with 21 laps remaining in the event. He came home 24th when the checkered flag flew from IMS, but opened a lot of eyes.

Did Alonso’s performance in the Greatest Spectacle in Racing make IndyCar look easy?

The Dude Can Drive

Fernando Alonso is one of the best race car drivers to ever hold a steering wheel, no matter what he drives. This weekend, he added IndyCar to his resume. He didn’t just add it – he excelled at it.

But he’s not alone.

I realize the equipment he was in was amongst the best in the sport. I realize this guy is one of the best race car drivers to ever live. I realize that the stage is magnified due to the gravity of the race. But with all that being said, on-track results don’t lie.

Alonso’s finish was in no way indicative of how he ran. Like I mentioned, he led over 20 laps in his first (and possibly only) IndyCar start. He was one of only a handful of cars that looked like they could grace victory lane when the checkered flag flew and be the driver to kiss the yard of bricks. But it wasn’t meant to be.

For Graham Hill, it was meant to be. Hill is the man Alonso is chasing, as he has the triple crown of racing – the Monaco GP, Indy 500 and Le Mans – and he won the 500-miler in his first ever IndyCar start back in 1966. But was Hill the anomaly?

The answer is simple: no. Besides Alonso, as recently as last year, Alexander Rossi drank the milk after he won the Indianapolis 500 in his first start. Despite being a fuel mileage win, a win is just that—a win. He was a test driver in Formula 1 who wasn’t able to provide the funding for an elite ride. So he came to IndyCar, and won quickly.

Who could forget about Juan Pablo Montoya? No, not the jet dryer. The fact that he can drive the wheels off a race car, too. JPM won in his first career Indianapolis 500 start in 2000, one year removed from his departure from the F1 ranks. JPM then tried his hand at NASCAR, came back to IndyCar and won his second 500 two years into his second tenure in the series.

Oh, and Jacques Villeneuve? He won the Indy 500 in 1995 after being two laps down in the race. That also happened to be his first season racing the IndyCar Series, following his Formula 1 stint.

I guess what I’m trying to say is that maybe Alonso himself didn’t make IndyCar look easy. But when you look at the totality of the situation, Formula 1 drivers historically have.

Three-time F1 world champion Lewis Hamilton said that Alonso would be the best driver in the paddock “for sure” ahead of Sunday’s 500. And maybe he was right.

Regardless of whether or not Alonso was the best driver, he sure did put on a show. And before he left IMS, he toasted a carton of milk with the media for following him around for the past two weeks and being so gracious to a “rookie” who was experiencing something bigger than himself for the first time.

Who knows, maybe Alonso will be back again in 2018 with some unfinished business. And maybe instead of toasting a carton of milk to the media, he’ll be chugging a bottle in victory lane.

I will be the first to admit that I was wrong about Alonso, he did a splendid job in the Indianapolis 500 and was way more competitive than I thought he would be. His superb performance is not an indictment of the series though.

Three-time Formula One champion Lewis Hamilton criticized IndyCar when he told L’Equipe, “I took a look at the qualifying results…Fernando, in his first qualifying, came fifth. Does that say something about (the level) of Indy Car? Great drivers, if they can’t succeed in Formula One, look for titles in other races, but to see him come fifth against drivers who do this all year round is…interesting.”

Formula One may have a grander history and tradition than IndyCar, but I feel that Hamilton’s comments are way off base because Indycar has become a more difficult league with far superior racing than its open wheel counterpart.

You don’t believe me? Watch the IndyCar race at Auto Club Speedway versus any Formula One race. The close-quartered, high-speed showdown that Fontana puts on is one of the best races of the year in my opinion.

In contrast, if you mention the word “overtaking” around a Formula One driver, then they have to look it up in a dictionary because it hardly exists in that league. The way that the cars qualify and get off of the grid is practically the way they finish. Hamilton is supposedly of the best drivers in the world, but he finished seventh in the Monaco Grand Prix because he struggled in qualifying and had a hard time passing anyone during the race.

The courses of Formula One are challenging and the drivers have to have a lot of talent hitting their marks lap after lap, but the same goes for IndyCar.

Alonso appeared to run well at IMS in his debut for a few reasons, and none of them cheapen the quality of racing of IndyCar.

The first reason is that Alonso is an extremely talented driver. The guy has two F1 titles and 32 grand prix wins. The transition was not a huge one, as both types of racing use similarly designed open wheel cars. They have their differences, but there are enough similarities for a great driver to make it work.

The only real change that Alonso had to get used to was driving on an oval (or whatever you call IMS) at speeds over 200 miles per hour. That is no easy task, but fortunately for the Spaniard, Indianapolis is probably the easiest track on the entire IndyCar circuit. It is not as technical as the tour’s road courses and it gets more spread out than the other ovals.

Indianapolis for IndyCar is a lot like Daytona International Speedway and Talladega Superspeedway for NASCAR, it is an equalizer for the field. Mario Andretti won the Daytona 500 during his foray into NASCAR, but he did not come close to winning at the other tracks he attempted because they required a lot more familiarity with the car and series.

Speaking of Andretti, Alonso had the support of a great team in his Indy 500 attempt. Andretti Autosport has won the event in three of the past four years and Alonso had all three of those drivers and their crews to lean on. That also means that he had equipment that could have carried him to victory lane.

Alonso impressed a lot of people in the Indy 500, but honestly, his performance was a bit misleading. He led early in the race and ran in the top 10 prior to his engine expiring, but I do not think that he would have finished in the top 10 either way.

While Alonso was running up front and making those passes, he was being extremely aggressive. Meanwhile, the rest of the field was pacing itself for the long haul. Many of the drivers seemed to be driving conservatively in the early stages and letting Alonso go rather than race him.

In the 20 laps or so prior to the engine blow, Alonso started to fall back, as the rest of the drivers seemed to finally decide that it was “Go Time.” Race winner Takuma Sato and three-time Indy 500 champion Helio Castroneves were the two duking it out at the end, but the pair only led for a combined 26 of the 200 laps because they were biding their time and saving their stuff for the end.

Alonso certainly did a great job of keeping all four tires (or should I say “tyres”) on the road and being competitive, but to say that he could have won the race would be quite the overstatement. It takes quite a bit more experience in the series for that to happen.

Hopefully, this is not the last we have seen of Alonso in the Indy 500 and I hope that he even tries his hand at NASCAR some day. As for Hamilton and his degrading remarks, if Indycar is such a joke, then why doesn’t he come try to dominate it like he has F1 the past several years? I challenge him to put his money where his mouth is.

Alonso certainly had the best possible conditions for someone from another series doing a one off race in Indy Car. That said talent shows and he reminded us of why he is ranked as one of the top drivers in the world. Good for him and if the situation is right lets hope he will do it again.

An F1 driver named JIM CLARK won the year before Graham Hill. That was when the 500 was on the F1 schedule. Lotus’ Colin Chapman started the rear engine revolution at Indy and Jimmy Shampine tried it in a super-modified at Oswego. Andy Graves also tried a 4-wheel-drive super at Oswego.

Could the Grand Slam of racing include the Daytona 500?

DoninAjax, think about getting all the pieces right in one place. The combination of Jim Clark, the lotus chassis, and the Ford engine. Indy hasn’t been the same since.
Including Daytona as part of the Grand Slam is interesting. I think you will see more support for that from here in the US than around the world. And face it they have us outnumbered. If you do it would be the only one that is a spec series, although Indy is close to that now they aren’t quite there yet.

The rear engine revolution started with Jack Brabham and the Cooper Climax.

The first rear engine car showed up in 1939.

“Oh, and Jacques Villeneuve? He won the Indy 500 in 1995 after being two laps down in the race. That also happened to be his first season racing the IndyCar Series, following his Formula 1 stint.”

WAIT!!!!! Get real! Alonzo was on a top drawer team…. The ENTIRE team qualified at the top and dominated the race…. Don’t claim that Alonzo did this on his own…. If he was on a lower team, he would have performed much worse….

It always such a joke when a pundit (Michael Massie) challenges a champion (Lewis Hamilton) to put his money where his mouth is. Like LH really cares what you think. I challenge investigative reporters to look into the Clinton Foundation contributors and Barack Obama paying millions in cash to terrorists for the release of hostages. So lame.