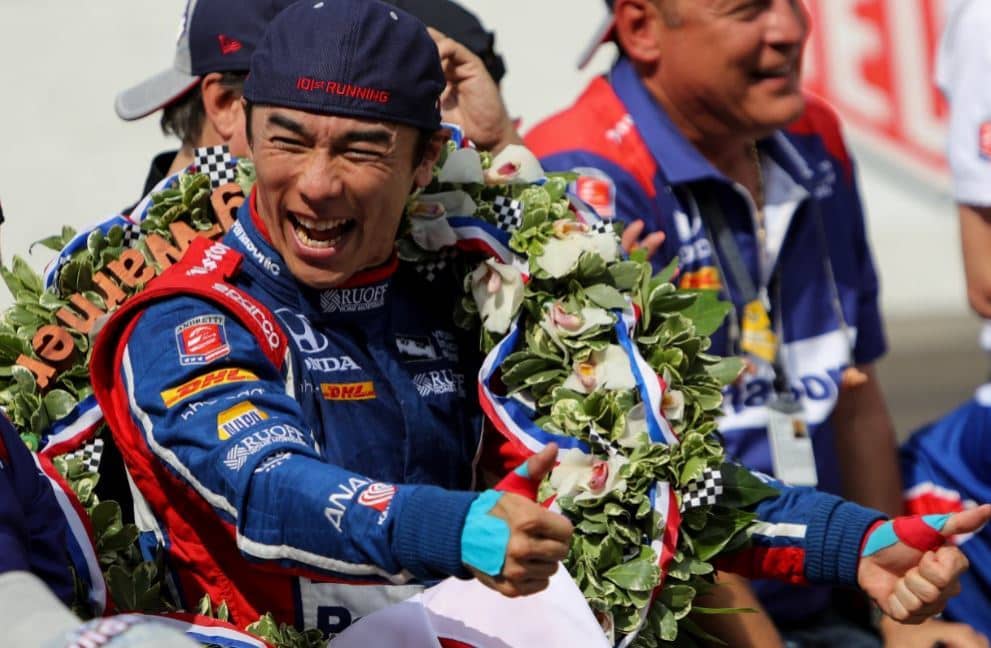 Following a late restart with Max Chilton out front, it was Sato who perfected the pass with five laps to go and held off the three-time race winner Helio Castroneves to win the 101st Indianapolis 500.

The win, the first for a Japanese driver in Indy 500 history, comes in his first season for Andretti Autosport and in his eighth Indy 500 attempt.

“It was a tough, tough race,” Sato said. “Helio really drives fair, so I can trust him. It was fantastic, a fantastic race. It’s beautiful.”

With terrific two- and three-wide moves in the final stages, Castroneves overcame hair-raising obstacles to battle for a fourth Indy 500 victory with Chilton and Sato. However, the Brazilian came up short of that mark, finishing second by 0.2011 seconds.

“I tried everything I could with two laps to go,” Castroneves, who finished second in the 500 for the second time in the last four years, said. “My tires were overshot a little bit, so I had to back off a bit.

“Man, [Sato] just took off and that was it. Really disappointed.”

Finishing third, Ed Jones scored a career-best finish, standing as the highest of the rookies drivers.  Jones held tough with Indy 500 winners and ex-Formula 1 talents in his mirror.

“It was a great race for us,” Jones said. “The race was so up and down. Ran top 11 for most of the race. We had to change the rear wing, came from the back of the field. We just lacked that straight-line speed in the last 40 laps.”

Chilton finished fourth after being the top dog for most of the last stint.

The race’s entirety mirrored that of the final few laps — hectic and edgy. In what will stand as the moment of the race, polesitter Scott Dixon had a terrifying airborne crash on lap 55, hitting into the slower car of Jay Howard to start the flip.

After Dixon impacted the inside fencing, the red flag was waved to repair the fence. Both drivers were checked and released from the infield care center.

The carnage continued into the final 20 laps, as a multi-car crash ensued on a restart in Turn 1. James Davison was turned head-on into the outside wall, collecting Oriol Servia, Will Power, James Hinchcliffe and Josef Newgarden.

Meanwhile, Fernando Alonso was among the top drivers of the afternoon, leading the event on multiple occasions with passes on both the inside and outside lanes. His first 500 ended abruptly with 21 laps to go, however, as the engine blew on his No. 29.

I felt a little bewildered seeing the Japanese flag being waved during the victory lap. After all it was Memorial Day, which was established after WWII for the deceased Armed Personnel. But I understand. Surprised by the muslim looking 500 Queen and not a cute Indiana farm girl. We are a diverse nation, despite what some people say.