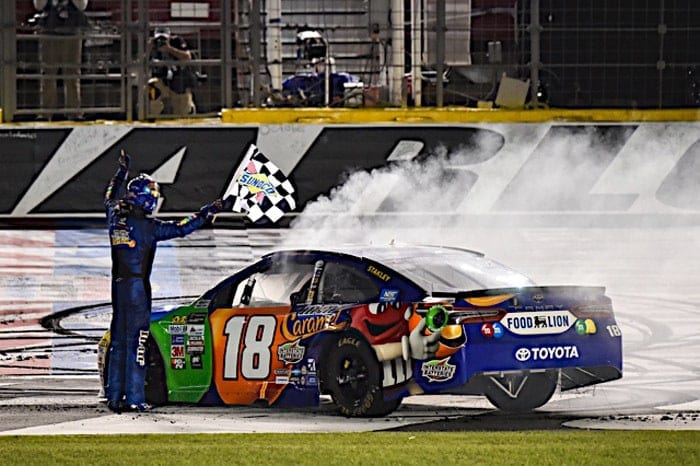 Who’s in the headline: Kyle Busch had won 15 races at Charlotte Motor Speedway in national touring series but never once visited Victory Lane in a Cup car. That changed Saturday night when Busch made an aggressive move on the restart to begin the final segment and took the lead, holding on for the final 10 laps to secure the win. Kyle Larson won the first two segments and came home second while Jimmie Johnson took the green-and-white checkered flag in the third segment.

From the Open it was Ryan Blaney, Clint Bowyer and Daniel Suarez winning stages and the race while Chase Elliott garnered the most votes to advance to the All-Star race as the fan choice.

What happened: Larson dominated the beginning of the race, leading all 40 laps of the first two stages. Blaney managed to lead at the line after the restart to begin segment 3 but lost it to Johnson, who led the remainder of the laps. Brad Keselowski had a vibration with his option tires before the third segment began and made a trip to pit road to switch back to primes. His crew was told they could not put the option tires back on so he stayed out between the third and fourth segments. Old tires could not hold off new and Busch went to the bottom to make it three wide at the drop of the green. He cleared Keselowski, took the lead and ran away for the remainder of the race.

Why you should care: While there was some exciting racing in the pack all night long, the battles for the lead were short and uninspiring. The leading car still has too much of an aero advantage with these cars sealed off to the ground. The other item of note was the option tire. It was faster, gave up significantly at the end and allowed teams to make strategy calls. Unfortunately it wasn’t an “option” as all teams only had four sets of tires, including their qualifying tires. So they were forced to use the “option” set at some point during the race. It would be nice to see the teams have a little more flexibility

What your friends are talking about: The option tire was a nice baby step in the right direction, but there needs to be more advantage to using them. Putting on tires that only gain three to four tenths and fall off more than the primaries is not enough to entice teams to employ them for strategy. Give them a second a lap for 15 laps and then you’ll see some teams have an interest in trying them out.

Aric Almirola will miss eight to 12 weeks thanks to his broken back. You had to assume it would be something like that since it took Tony Stewart eight weeks to get back in a car after his back injury. The recent study of concussions and the danger of the sport has resulted in several drivers looking hard at the timing of getting back into race cars after they suffer an injury. Almirola noted that rushing back could expose him to greater injury that could negatively impact him for the rest of his life.

NASCAR announced the addition of a fourth stage to the Coca-Cola 600 next weekend. While it is a long race and there is certainly incentive to break it up into four segments, this precedent is a one to set. You now have an event that weighs more heavily on the season and the championship than other races in the regular season. The extra points awarded for that race could ultimately determine whether someone advances during the playoffs or not. It is a slippery slope having one race pay more in points than another.

The 2018 Cup schedule will likely see some shakeup. Hearing that Las Vegas will kick off the playoffs with the former New Hampshire date, replacing Chicagoland Speedway. The Brickyard is rumored to be replacing Richmond as the final race of the regular season. Richmond will move into the playoffs so that another short track will be involved in the run to the title. No mention of the Roval being utilized at Charlotte for the playoffs as of yet.

Who is mad: Matt Kenseth had another fluky occurrence at the All-Star Race. Right before they ended the first segment his car began smoking. After he left the pit box there was oil on the ground that turned out to be a leaking oil cooler that parked him for the night. 20 laps out of the whole All-Star race has to be frustrating.

Dale Earnhardt Jr. fans can’t be too thrilled with how things have been playing out with NASCAR’s most popular driver of late. Saturday night was yet another event where it seemed the No. 88 team was out to lunch. Junior Nation is clamoring for a run at a title in his last season and it seems as though Earnhardt has resigned himself to playing out the string.

Who is happy: Elliott has been popular among the fans since he first raced. The legions of Bill Elliott followers have naturally gravitated to the son. The vote to put him in the All-Star race was rewarded handsomely with a seventh-place finish, better than anyone else who transferred out of the Open. Look for the young Elliott to put a firm hold on the Most Popular Driver award once Earnhardt Jr. steps aside.

When the checkered flag flew:

Kyle Busch scored his first All-Star victory of his career in his 12th start.

That was the most starts before a win by a driver in the history of the race. The previous long drought was Tony Stewart, 11 years before his 2009 triumph.

The win is the second for Joe Gibbs Racing in the event. Denny Hamlin did it in 2011.

Jimmie Johnson’s ninth top five in the All-Star Race is the most by any driver in history.

As much as this race is hyped and they love to replay the videos of the “pass in the grass,” Rusty Wallace spinning Darrell Waltrip and Kyle Petty spinning Davey Allison across the line, the race just doesn’t have that kind of intensity anymore. The drivers absolutely race each other as hard as they can and there was some great fender rubbing in the Open, but in the end, the leader pulls away, the field gets strung out and nobody is wrecking nobody. Zero cautions outside of the ends of segments should tell you all you need to know. It was an average intermediate race, so it gets three Carolina Blondes from Foothills Brewing Company.

Where do you point your DVR for next week – The longest race on the NASCAR Cup schedule is next weekend. The Coca-Cola 600 can be seen on Fox Sunday, May 26 at 6 p.m. ET. It can also be heard on your local PRN affiliate, goprn.com and SiriusXM NASCAR Channel 90.

The softer tire was much Apu about nothing. For all the hype and discussion prior to the race it really didn’t matter. It did provide the opportunity to make NASCAR look foolish. Seems each year one of their cockamamie rules results in confusion and makes them look like buffoons that didn’t think things out.

I was rooting hard for Elliott not to win a stage. I wanted the popularity vote to get someone in the race that actually deserved to be there based on performance. I figured if Elliott won a stage then you know who would get in.

As has been the case the last several years, the all-star race was another dud.

I just had watched a different race. I knew whomever took lead on start/restart they’d be the segment Wilmer.

One think that confused me was why would a team opt fir the greentires on.one side and yellowtires on opposite. I realize the race I for “experimenting”, but two different tire compounds on the car at the same time?

Not that the all star race is good,but Thu race was horrible. Monster is clueless about Na$car fans. Their marketing is geared towards the group that has the attention span of a gnat. The burnout crap was useless. The driver/team intros was ridiculous.

If the 600 plays out like this mess, it will.be a long, boring race and no-doze will need to be sold at the concessions.

I watched this as I’ve been watching races this year, check back when tvland is in commercial break.

Jr, needs to change the effective date if his retirement. It’s painful to watch, and it’s beginning to remind me of dw’s last season. Luckily for him there’s the charter system and he’ll make the races. He’s not putting butts in the seats. his performance is reminding me of dw’s last season. I’m sorry but when jr put that rubber wedding ring on his finger his wife took possession of a particular part of his anatomy. Sure crew is screwed up too, but the common denominator in his career woes is him.

Dang auto correct….sorry about that folks. Next week I’ll boot up the laptop.

Dear Nascar, if you aren’t going to move the fiasco to Bristol or Richmond, then please, take this mangy mutt out behind the barn and put it down once and for all.

Brian better hope that there are no cautions in the 600 and it’s over as quickly as possible. “Debris” cautions will drag it out and make it even more unwatchable. That means no 23, 32, 83 or 55.

The Brickyard as the final race before the chase, playoffs, whatever they will be calling them in 2018? Wow yeah that will produce a lot of excitement. NASCAR really has no clue.

The Open was a decent race, the all star race was a bore.

They need to do something radical with the areo on these cars. I know the owners don’t want to pay for it, but we need a new generation of Cup designed from the ground up to limit down/sideforce. The current Gen-6 car was built to make downforce and you can only do so much with the spoiler and splitter. I want to see a car that races like the Gen-4, has the safety of the COT and the brand identity of the Gen-6. If your not going to make radical changes to the car to help on intermediates, then please move the All Star Race to a short track where areo won’t matter as much and contact will plentiful. Saturday night was a snoozefest.