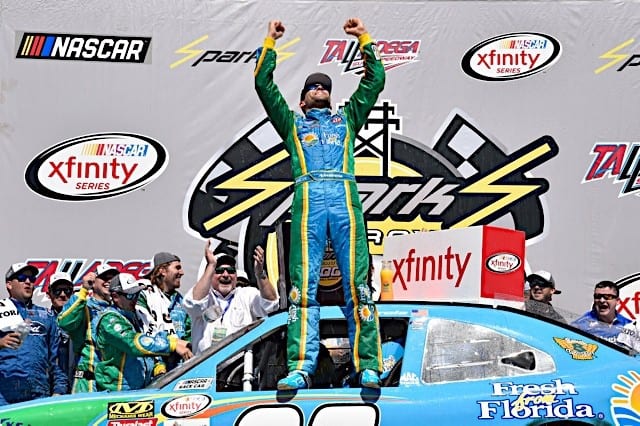 As they wrecked down the backstretch of Talladega Superspeedway, it was a mirrored finish of last July’s XFINITY Series race at Daytona for Aric Almirola. Except this time, they raced back under green.

For the second time on a plate track, it was Almirola who scored the victory for Biagi DenBeste Racing. Leading 13 laps, the Monster Energy NASCAR Cup Series regular held off Elliott Sadler for his third career XFINITY win.

“I knew our car was really fast,” Almirola said. “I have to thank Joey [Logano], he gave me a really good push there. It was great to see the Blue Ovals working together. Awesome job! It’s just awesome to get this Fresh From Florida Ford into Victory Lane.”

Sadler said he made a mistake coming to the white flag that may have cost him the victory.

“I should know better,” Sadler said. “I was racing some good guys up there with the Dillon boys, Joey, Aric. I’m just proud of my team. We fought back.”

There was a little bit of everything in Saturday’s Sparks Energy 300 at Talladega. We saw some underdogs up front, some carnage (mostly early), pit strategy in the final stage and plenty of experience up front fighting for the victory.

That’s where the “good” of Saturday came from. Like most ‘Dega races, you never knew what would come next. Blake Koch started from pole in his 189th XFINITY race, however, didn’t last long after a crash ended his day on Lap 49.

But the race took a different turn in the final 63-lap run, when Jeff Green stayed out to lead 18 laps in his No. 8 Toyota while Justin Allgaier proved the be the quickest car of the day in his No. 7 JR Motorsports Chevrolet.

Allgaier did not see Richmond redemption, however, as he fell to finish eighth after leading 23 laps, most of the afternoon.

The strategy play gave fans a couple comeback runs to watch from Joey Logano, who had to forfeit spots due to debris on his No. 22 grille. He would make it back up front just in time to give Sadler and Almirola a run for their money.

“Dang it,” Logano said. “I had a good push there. If the caution came out sooner, we would’ve won the race. Selfishly, I wish they threw it earlier but for the fans, I understand, let’s finish this thing. I felt like I learned a lot in the race.”

The day gave some good runs to some drivers in need of one. Matt Tifft grabbed his second top 10 of 2017 in the sixth spot while Michael Annett earned a third straight top-10 finish from the seventh spot.

Jeff Green finished 10th, only his second top-10 finish since 2005 while JJ Yeley and Ryan Sieg finished in the top dozen.

The same wreck that ended pole-sitter Koch’s day also took out Daytona winner Ryan Reed, Brendan Gaughan and others right at the end of Stage 2.

Reed, getting tagged in the rear from Almirola, was not happy with how the Cup regular raced during the day.

“It was a careless push. I think he knew that,” Reed said. “I know he took the blame but we had a car that could win.”

Almirola apologized for the wreck in Victory Lane.

And that wasn’t the only wreck that ensued near the end of a stage, as the first 25-lapper saw the first Big One of the afternoon down the backstretch when Daniel Hemric, Brandon Jones, William Byron and others were involved.

Hemric took the brunt of the crash when he hit right-side first into the outside wall.

“That was the end of our day,” Hemric said. “We had a really fast Chevy. All the RCR cars had speed today. Hats off to everyone at the shop.”

Though there was a halt in the carnage, the race ended with an accident between Ryan Sieg and Darrell Wallace Jr. The latter impacted the inside wall while Sieg, who ran as high as second in the final laps in his No. 39 Chevrolet, spun without apparent damage.

After two big wrecks took place in the first two stages, there was some frustration that boiled over from drivers climbing out of torn-up vehicles.

Daniel Hemric was out of the race on Lap 20 after he got clipped in the right rear and pounded the outside wall.
“It’s just everybody not using their heads that early in the race,” he said.

Brendan Gaughan was victim of a bad push from Almirola to Reed and crashed out on Lap 49. As he and Richard Childress Racing teammate Ty Dillon were making gains together, he was not happy to see it end.

“We were running for he stage win with my teammate, right spot,” he said. “Just restrictor plate racing.”

Jeff Green had his best run in the XFINITY Series in decades when he drove from last on the grid to finish 11th in Stage 1. Playing with pit strategy, the 2000 champion grabbed the race lead, holding it for 18 laps in his No. 8 BJ McLeod Motorsports Toyota.

For the Kentucky native, it was the most laps he has led in an XFINITY race since 2002.

Additionally, the 54-year-old survived the late mess to finish 10th, his first top-10 finish since last July and only the second since 2005.

The double duty men were all over the finishing order on Saturday. With this weekend bringing out some unfamiliar double duty weekends, it wasn’t a big surprise.

Brendan Gaughan crashed out on Lap 49 to finish 30th in his No. 62 Chevrolet. He will race for the second time of 2017 on Sunday with Beard Motorsports.

Joey Gase was right in the middle of the lead pack on the last lap, but was unable to race for the win standing one lap down. The No 52 driver finished 16th and will race for Premium Motorsports for his second Cup start of 2017 on Sunday.

Kasey Kahne and Ty Dillon were up front throughout the day but found issues, leading to 14th- and 15th-place finishes.

In the end, the Cup guys ruled supreme with Joey Logano finishing third, Elliott Sadler, who will run Sunday’s Cup race for Tommy Baldwin Racing, in second and Aric Almirola winning the 300-miler.

“It’s just everybody not using their heads that early in the race. I don’t understand. We’re coming up on the end of a stage. I thought everybody would watch Daytona and see how few of cars finished without accidents. It’s just everybody racing too aggressive.” – Daniel Hemric

“We were up front, I didn’t like what I saw, bailed out just in time to miss the wreck with people driving over their head. It happens. Great racetrack, fun place to be. I love being here, but that’s the ills of restrictor plates.” – Brendan Gaughan

“Lost some track position for the second stage. My plan was the hug the bottom the whole time. With one to go, I moved to the top. Just got caught up in a wreck.” – Blake Koch

Expectation. Any time we roll into the sport’s largest track, there are certain things that come expected: big wrecks, bent fender and tempers, pit strategy of a different kind, small teams up front and experience rising to the top for the win.

We saw all of that and more on Saturday.

Up Next
The XFINITY Series will next race on Memorial Day weekend, heading next to Charlotte Motor Speedway for the Hisense 300. Denny Hamlin was the event last year in a frantic finish with Kyle Larson.

I knw he’s still a Cup driver, but I am giving Amirola some slack here. He was driving for Biagi DenBeste Racing, a full time Xfinity series team. Now, does Biagi DenBeste have any affiliation with a Cup team? I don’t know. Still, they was a series regular team, and not one that’s a Cup-lite team like the #22, or the #18, #19, and #20. Too, it looked good that Amirola beat Eric Jones especially, considering how Joe Gibbs screwed Amirola over at Milwaukee a few years ago, when Aric qualified the car on the pole and was leading. Then Dennis-the-menace Hamlin showed up from Sonoma, and Amirola was unceremoniously hauled out of the car mid-race to appease sponsors.