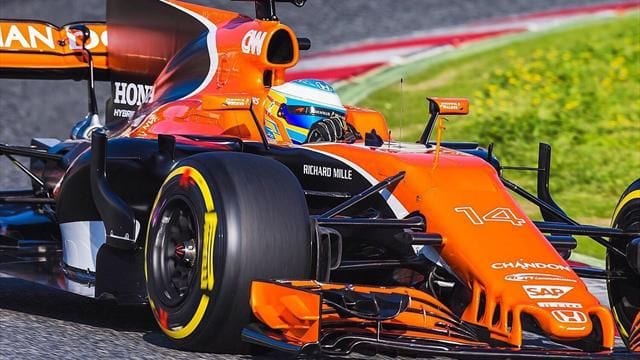 This week’s Fronstretch debate question: McLaren driver and Formula 1 champion Fernando Alonso recently announced he would forgo competing in the Monaco Grand Prix on Memorial Day weekend and compete in the 101st running of the Indianapolis 500 instead. This will be his first career start in the IndyCar Series.

Is Fernando Alonso making the right decision by skipping Monaco to run Indy on Memorial Day weekend or should he stay in Formula 1 for the biggest race of their season?

It Doesn’t Hurt to Try

Fernando Alonso is making the correct decision by skipping the Monaco Grand Prix to run the Indianapolis 500—and it’s not even close to being the wrong one.

Why? Well, first off, to say this season for McLaren in Formula 1 has been an embarrassing disappointment would be a huge understatement. Both of their cars (one driven by Alonso and the other by rookie Stoffel Vandoorne) have finished only  one race combined this season which has consisted of Australia, China and this past weekend in Bahrain: one finish and zero points earned for the team.

This year in F1, McLaren can be compared to BK Racing in NASCAR. We know they won’t be competing for wins, moreover top 20 finishes, and they’re just in the way. But instead of Gray Gaulding driving for BK Racing, imagine someone like Brad Keselowski, Matt Kenseth or Kyle Busch.

That’s the position McLaren is in, as they have a two-time world champion in Alonso piloting a car that seemingly can’t hold itself together for two hours. So why shouldn’t a championship-caliber driver who has a small chance of even finishing in the points in Monaco not switch it up?

Plus, at the end of the day, his goal is simple: the triple crown. Monaco, Indy and Le Mans. Only Graham Hill has completed the lofty goal of winning those three prestigious races. So who’s to blame Alonso for trying to live out his dream and check box No. 2 off his list?

Heck, Kyle Larson has been rumored to be considering the double as well. Chip Ganassi said it won’t happen this year, but it’ll most likely happen down the road. And I know Juan Pablo Montoya’s situation was unique, because he competed full-time in both Formula 1 and IndyCar. But the premise is the same: drivers from other series should be welcome to compete in other racing series.

In fact, they should be encouraged. Especially when they’re big time names like Alonso. He has over 3 million Twitter followers. No disrespect to Sergio Perez or Lance Stroll, but they wouldn’t make headlines if they decided to skip Monaco for Indy. Alonso did.

Bottom line: Alonso has no chance winning Monaco. He has a chance to win Indy.

And to any motorsports fan (or sports fan, for that matter), his competitive spirit should be celebrated, not criticized. Just sit back, relax, and enjoy the show.

Stick with What You’ve Got There

I get that Fernando Alonso is checking a huge item off of his bucket list—I’d like to run the Indy 500 one day too—but he is making a huge mistake by doing so.

Alonso is a long shot to win it, but he will be missing out on a chance to win Formula One’s biggest race, the Monaco Grand Prix. He is a two-time winner of the event and finished in the top-five last year. Anything is possible, something could happen to the race favorites and his car could end up in victory lane.

Instead, Alonso will spend the day struggling not to get run over by the rest of the field in the Indy 500. Sure, he will have a car that can win the event and there is no doubt that he is one of the greatest drivers ever, but at 35 years old, Alonso is no spring chicken, and he will have a hard time adapting to the sometimes-three-wide pack racing seen at Indianapolis Motor Speedway.

Formula One cars never race as closely as the cars do at IMS, and they certainly do not pass each other as much. The other 32 drivers in the field will likely have spent their entire lives preparing for this type of racing, instead of jumping in at age 35.

Switching to another type of motorsport just does not work like it used to. Back in the day, Mario Andretti and A.J. Foyt switched to NASCAR with ease, with each winning the Daytona 500, while NASCAR driver Donnie Allison came close to winning a few Indy 500s.

The thing is that back then, the cars and the styles of racing were knitted closer together, so a spectacular driver could swap steering wheels and find success. But now, NASCAR, IndyCar and Formula One are extremely different. The drivers for each form of racing start driving right after they learn to walk nowadays. This is makes it nearly impossible for someone, despite their accomplishments in one form of racing, to find the same success in another.

There are exceptions, such as Tony Stewart, Juan Pablo Montoya and Kurt Busch, but think about all of the drivers in the past 20 or so years that failed to make the transition and greatly hurt their legacy in doing so.

Essentially, it is about like when Michael Jordan retired from basketball to go play baseball. He went from winning basketball championships to striking out all of the time in minor league baseball.

Sam Hornish Jr. was a three-time Indycar champion and won the 2006 Indy 500, but failed miserably in NASCAR. He went from being an elite Indycar driver to never scoring higher than 26th in the Monster Energy NASCAR Cup Series’ final standings.

Hornish drove for Team Penske during the time that Brad Keselowski won the Cup championship, and he never found his way into victory lane for a Cup race. Imagine how much more success Hornish could have had if he had kept driving for Penske in the Indycar series.

Dario Franchitti was a four-time Indycar champion and three-time Indy 500 winner. Franchitti won the Indycar title every year from 2007 to 2011, with the exception of 2008, because that was the year he tried his hand at NASCAR with Chip Ganassi Racing. The Indycar legend never finished higher than 22nd place in the 10 MENCS races he actually qualified for. He could have potentially won five straight Indycar titles had he stayed put.

Lewis Hamilton said that he would like to drive in a NASCAR race one day, but he would be a fool to do so. He has little experience is stock cars or ovals and would be competition against people who have done it their whole lives.

Not to mention, NASCAR is the least inviting of all motorsports, especially with the new charter rule and the four-team restrictions. Unless an elite team like Hendrick Motorsports tells Hamilton that he will sit Jimmie Johnson one week so that Hamilton can drive the No. 48, then there is no good situation for Hamilton to jump into.

The only elite teams that could put a third car out there for Hamilton would be Penske or Ganassi, and I have already mentioned how both of those owners failed with an open wheeler in the driver’s seat. It would severely hurt Hamilton’s image to see him parading around in 38th place in the No. 55 that Derrick Cope usually drives.

It is exciting to see Alonso on the Indy 500 entry list, but it will be overhyped and he will be lucky if he doesn’t kill someone, given his inexperience to the close-quartered, high speed racing at Indianapolis.

On paper, or if you were to go back in time 40 years, it is a great idea to drive in another form of racing. With the reality of the way things are now, not so much.

“…lucky if he doesn’t kill someone.” Really? Over-dramatize much? Specialization in motorsports has become the norm to the point that when someone dares to do something different on a big stage, here come the chicken littles in the media to tell us that the sky is falling. Had you been alive when Jim Clark went to “lowly” Rockingham, you probably would’ve harmed yourself.

Massie doesn’t seem to know very much about racing.