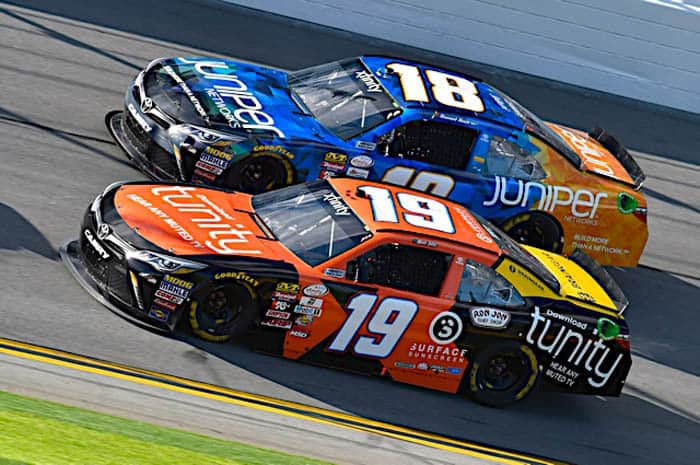 Five races into the NASCAR XFINITY Series season, one of the main storylines continues to be what has happened to Joe Gibbs Racing. Compared to recent years, when the organization dominated the racing on Saturdays they have not shown their expected brute force for 2017.

Is it time to get concerned?

The short term answer would be no. Through five races last year, JGR had three victories, all coming from 2009 series champion Kyle Busch. Heading into Texas Motor Speedway last year, the No. 18 car was the odds-on favorite, and the smart-money won. It was Busch’s either career win in the XFINTIY Series in the Lone Star State.

Following Texas, Busch went on to win six out of his final 12 races in the No. 18 car, wracking up 10 wins from the total of 17 races he entered for JGR during the season.

We expect that out of Busch, and it’s a big reason why NASCAR has limited Cup Series drivers with more than five years of experience to compete in only 10 races this season, and seven in the Camping World Truck Series.

Busch’s success was one thing, but add in Erik Jones‘ four triumphs and Daniel Suarez winning a trio of races, including the championship at Homestead-Miami Speedway, and JGR had a year to remember in the XFINITY Series in 2016.

But where are they now?

Matt Tifft joined the stable full-time in 2017, after racing in 10 events last season. The rookie knew that this season was going to be a learning curve, but he is the only constant at JGR in 2017, because he is the only full-time competitor. Last year, Jones and Suarez battled hard on the track, but they also had each other to rely on. Tifft, though he goes to some of his veteran teammates for advice, is a man on his own.

“I think it gives me a leg up for sure,” Tifft told Frontstretch at Daytona International Speedway regarding his chances with Joe Gibbs Racing. “JGR has been so dominant in the XFINITY Series over the past couple of years. It definitely gives us a big plus compared to anything else. I still need to go out there and perform myself. I have good equipment, so we need to keep working together with our teammates and learn as much as I can to compete for the championship.”

Through five races it is fair to say Tifft has underperformed. His best finish came at Daytona when he crashed across the finish-line in 11th-place. Besides that, he has a pair of 12th-place efforts at Atlanta Motor Speedway and Phoenix International Raceway, which are his only finishes inside the top-15. Currently, the 20-year-old sits ninth in the championship standings.

Through the first five races in 2016, JGR had led 635 laps, 626 of them coming from Busch.  Jones led a handful of circuits at Phoenix after starting from the pole, while Suarez led four laps at Auto Club Speedway, and was leading on the final lap before he ran out of gas, handing the win to Austin Dillon.

However, the trio of drivers were awfully consistent. After wrecking out of the season-opening event in Daytona, Jones went on to have four-consecutive top three finishes. The No. 20 car did not record its first checkered flag of the season until late April, leading 62 laps at Bristol Motor Speedway.

Suarez on the other hand finished in the top eight through the first five events of 2016, and after crossing the line in fourth on fumes at Auto Club, he was leading the championship standings. The No. 19 car would sit atop the standings until Dover in mid-May, just to regain it the next week at Charlotte, holding onto it until Iowa Speedway in May.  Throughout the season, Suarez was never lower than fourth in the championship standings, and he qualified in the top 10 for all 33 races.

The XFINITY schedule is a bit goofy.  After having a race in each of the first five weeks of the new season, the XFINITY Series schedule is not consistent until Labor Day Weekend, when it heads to Charlotte Motor Speedway. Following that race, the series will be on track for 20 consecutive weeks, the longest run in any of the three series. However, that means teams can’t necessarily get into a groove until then– JGR being one of them.

Busch has already participated in three of his 10 possible races this season. Yes, he won at Atlanta, adding to his series-record 87 victories, but he has not been out front.

Compared to his first three races during the 2016 season, Busch has led a combined 129 laps. Last year, he led at least 119 laps in each of the first five races he was in the No. 18 machine.

Throwing a pair of Cup Series rookies into the third car for JGR hasn’t panned out the way it was supposed to. For the second year in a row, Jones crashed out at Daytona. However, since that race, he has a third and fourth-place result. But Suarez’ first three events this season have been rough. He also crashed out of Daytona, only to come back and finish third at Las Vegas. In his most recent outing at Phoenix, the Mexico native blew a rear tire, spun into the wall and finished 39th — and he has also started outside the top 10 twice in his three races. Prior to Daytona, the last time he started outside the top 10 was at Dover in October of 2015.

Since 2012, JGR has dominated the XFINITY Series, winning 64 races, the most of any organization by a landslide. JR Motorsports is the next team on the list with 23 victories. Richard Childress Racing has been victorious 20 times, while Roush Fenway Racing has crossed the finish-line first 13 times.

Yes, it has only been five races, so there is absolutely no reason to panic. But JGR winning only one event through the first five races hasn’t happened in an XFINITY Series season since 2012 when Joey Logano had the teams solo victory. He, however, went on to win eight other races that year.

Whether its crew chief pairings, adapting to NASCAR’s new rules limiting Cup Series drivers form participating in XFINITY Series events, or even the new aerodynamic package, it has thrown JGR for a loop. But you’ve got to think they are going to turn the ship around.

Gibbs is on the phone to Brian, like Mr. H, asking “What gives? You said you’d do something about the Fords.”

I don’t think that “Tokyo” Joe is cheatin’ enough this season, maybe?