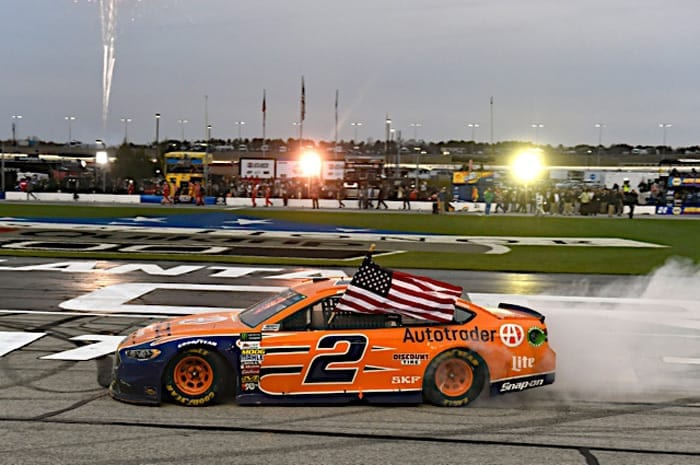 1. How Will Brad Keselowski Fare Without Paul Wolfe?

When Team Penske’s No. 2 Ford failed postrace inspection at Phoenix International Raceway last weekend, crew chief Paul Wolfe was suspended for the next three races Monster Energy NASCAR Cup Series races, and the loss of Wolfe is far greater for Brad Keselowski than the 35 points that were erased.

Keselowski and Wolfe have been become like Batman and Robin over the past few years. Both were around the sport for quite a few years with marginal success prior to being matched together at Penske in the XFINITY Series in 2010. The pairing instantly brought the best out of each of them, and as a result the Keselowski-Wolfe team won the 2010 XFINITY title and the 2012 MENCS championship, the first of either for Roger Penske. Additionally, Wolfe became the first crew chief in history to win both titles.

If you need past examples, consider this: Wolfe faced a two-race suspension in 2013, and it completely derailed the team. Keselowski finished 32nd and 36th in those two races and went on to miss the Chase for the only time since driving the No. 2.

The good news for Keselowski is that the win at Atlanta Motor Speedway likely locked his team into this year’s playoffs. Even still, the suspension could still be a major setback.

2. Will Super Jimmie Johnson Continue His Reign as the King of Cali?

When NASCAR started racing at Auto Club Speedway in Fontana, California, Jeff Gordon, who has California heritage, quickly became the guy to beat at the track, winning three of the first eight races at the track.

Gordon soon gave way to Californian Jimmie Johnson, who has since won at the track a record six times.

Johnson won in his 2002 rookie season at Fontana, but he did not return to the track’s Victory Lane until 2007. But once he did, he came back with a vengeance; from 2007 to 2010, Johnson won half of the eight races ran there. After a five-year absence, Johnson won another race at his home track in the spring of 2016, this time soaring to the front in the closing laps with a Superman paint scheme and subsequent cape in Victory Lane.

The seven-time champion has struggled so far this season, but will Super Jimmie turn it around at a track that has been far from his kryptonite?

Nothing helps a struggling race team or driver quite like a trip to Victory Lane. Let’s face it, Ryan Newman’s win at Phoenix International Raceway last week was a fluke. He had a top-10 car, but he came nowhere near the lead until the team elected to stay out on the final caution.

However, the team is now locked into the playoffs should no more than 16 different winners visit Victory Lane, which is something the No. 31 team missed out on last season. The win provides the team with a much-needed boost of confidence and a chance to compete for a championship.

Four years had passed since Newman’s last win, but 23 years have flown by since RCR’s last championship. Both the driver and the team seemed to be fading off into mediocrity until the win. It gives Newman and Childress a chance to be what they formerly were: an elite driver that has scored a victory 18 times, and an elite owner that has won six championships at the top level.

However, the team needs to take advantage of the win and continue to perform the rest of the season. The odds, based on past performance, are that Newman likely will not win again this season, and that it might have been the final win of his career last weekend. But if the team can build off the win, then the odds of that might change for the better.

4. Could a Race Winner Miss the Chase?

So far this season, there have been four different winners in the first four races. That doesn’t include points leader Kyle Larson, though with the way he’s been running, that seems unlikely to hold into September.

Other drivers that won last season that still have yet to win this season are Jimmie Johnson, Joey Logano, Kyle Busch, Matt Kenseth, Denny Hamlin, Kevin Harvick and Chris Buescher. If those seven, plus Larson and the four current winners, win this season, then that makes 12 winners total.

Assuming those same guys all win again, and Buescher is the only one where that is a questionable call, that leaves four spots available for winners. It is hard to imagine that Chase Elliott, Dale Earnhardt Jr., Ryan Blaney, Clint Bowyer and Kasey Kahne will go this season without a win.

Throw in fast-learning rookies Erik Jones and Daniel Suarez and that makes for 19 potential winners this season, and that is without taking into consideration that there might be more underdog wins.

Therefore, it seems like the competition is so much greater this season than the past couple that there’s a good chance a fluke, one-off win will no longer automatically qualify a team for the Chase like it did for, say, Buescher at Pocono or Tony Stewart after he won at Sonoma last year.

Could this be the year where just getting a win doesn’t necessarily matter as much? If so, refer to question one, because Keselowski  losing Wolfe for a few races may be more important after all.

Panic, Panic, Panic….we are 4 races into 36…start sweating and wringing of hands, sleepless nights and anxiety..oh my!