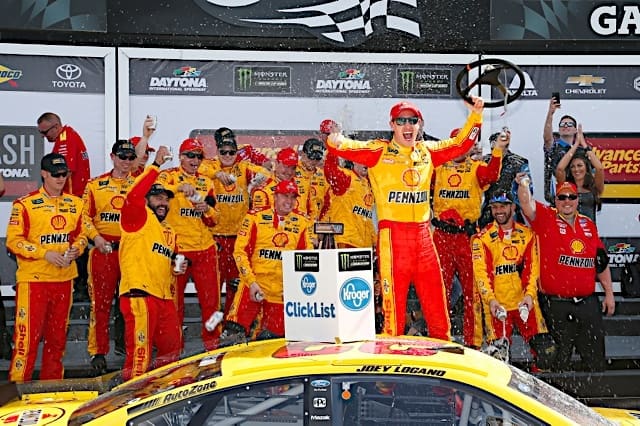 Ford has been on fire to start the 2017 Monster Energy NASCAR Cup season.

Joey Logano kicked the season off by winning the Advance Auto Parts Clash at Daytona for the Blue Oval. Then, Kurt Busch won his first Daytona 500 in nail-biting fashion in his first race for Ford since 2005.

Most recently, new Ford driver Kevin Harvick dominated the race at Atlanta Motor Speedway, only to let it slip away by way of speeding penalty. The beneficiary of Harvick’s mishap? You guessed it: Ford’s Brad Keselowski, who won at Atlanta for the first time in his career.

Each manufacturer works relentlessly through the offseason to try to gain an edge over the rival makes. As such, with  tight competition between Ford, Chevrolet and Toyota, it is rare for one to go on a long winning streak, as Ford has.

Since the addition of The Clash in 1979, there have only been six occasions where one manufacturer has won the exhibition race and the first two points-paying races to start the season, including this season — and it didn’t even happen once during the first 12 years of The Clash.

The feat became a frequent occurrence in the 1990s, though, with a manufacturer winning the trio of races four times during that decade. Three of those were by Chevrolet, doing so a series-high four times overall.

The track hosting the second race of the season has changed a few times during this span, so there have been four different track lineups on which this feat has happened.

Ford won the first three races the following season in 1992, but the second race had moved to Rockingham Speedway. This track lineup produced the season-starting sweep three times. That year, Geoff Bodine won the Clash, Davey Allison won the Daytona 500 and Bill Elliott won Rockingham for the only time Ford won the trifecta until 2017.

The Blue Ovals were truly unstoppable in the 1992 season, as Ford won the first 11 events that season, including the first nine points-paying events as well as the Clash and the All-Star Race. Ford driver Alan Kulwicki won the championship that season.

1995 was the next year of early dominance, as Chevy took the first three races thanks to Earnhardt, Sterling Marlin and Jeff Gordon. Then, in 1997, four-time champion Gordon accomplished the feat all by himself, winning the Clash, the Daytona 500 and Rockingham. Gordon went on to win the ’97 title.

The most recent time one manufacturer won the first three races prior to 2017 was in 2010, with Kevin Harvick, Jamie McMurray and Jimmie Johnson the winners. That season, Auto Club Speedway was the second race of the season.

A good omen for Ford this season? The make that has won the three season-starting events has gone on to win the driver’s championship every time it has happened.

And finally: OK, so Ford’s won The Clash, Daytona and Race No. 2. If they can continue the hot streak all the way through Las Vegas Motor Speedway, the third race of the year this weekend, in whose company would they be?

If 2017 is to be a year of Ford dominance, then expect to see a LOT of Team Penske and Stewart-Haas in victory lane, since they happen to be the only Ford teams capable of winning, and one of those Ford drivers, Danica Patrick, is also incapable of contending for wins. That means that the other five Penske and SHR drivers, Brad Keselowski, Joey Logano, Kurt Busch, Kevin Harvick, and Clint Bowyer are going to be finding victory lane often this season, if it’s to be a Ford year.