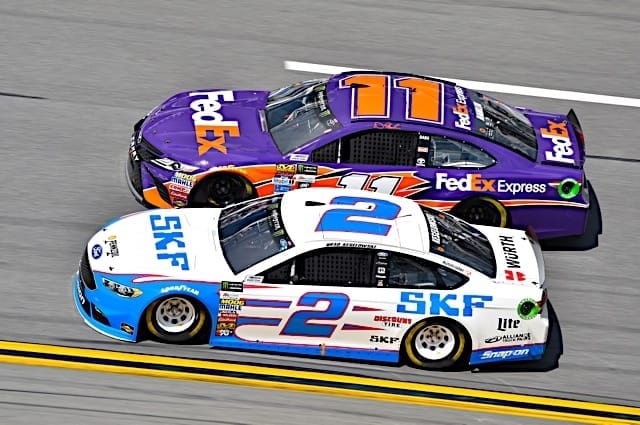 Though a new racing season has begun, the battles at the restrictor plate tracks continue to come down to the same competitors – Team Penske against Joe Gibbs Racing.

The two teams combined to sweep all of the points-paying Monster Energy NASCAR Cup Series plate races in 2016, with Gibbs’ Denny Hamlin also winning last season’s Clash at Daytona International Speedway. And that streak continues into 2017, as Penske’s Joey Logano avoided the last lap collision between teammate Brad Keselowski and Hamlin to take home the trophy of the Advance Auto Parts Clash at Daytona International Speedway.

Keselowski and Hamlin drew the front row for the Clash, making it that much harder for the rest of the field.

Hamlin has three Clash wins to his credit, as well as a victory at Talladega Superspeedway and last year’s Daytona 500, and four of those five plate wins came in the past three seasons.

Meanwhile, Keselowski is on track to become one of the all time greats at Talladega, having won four races in 16 starts at the track. The 2012 Cup champion won at Daytona last July for the first time but has yet to score a Daytona 500 victory. Keselowski was on track to win three consecutive plate races last season, but a blown engine in the fall Talladega race kept his dominant Ford out of Victory Lane.

In the Clash on Saturday, the early battle between the two superstars lasted until Keselowski was penalized for driving through too many pit boxes exiting pit road during the first caution. It left him mired back in the pack, though one can hardly call a 16-car field (Kurt Busch was out of the race at this point) a pack.

Keselowski and Logano were stuck at around the 10th-place mark for most of the race’s second segment. Meanwhile, the Gibbs cars seemed to be in a league of their own, running in positions 1-4 as the race approached the closing laps.

Hamlin had a firm hold on the lead, and with rookie teammate Daniel Suarez pushing him, Hamlin looked on his way to his fourth Clash win. And though he led a race-high 48 of the 75 laps, he did not lead the most important one.

With less than 10 laps to go, Keselowski finally moved off of his preferred inside line to pull in front of Logano in the outside lane. New Ford driver, 2014 Cup champion Kevin Harvick, got to Logano’s bumper and the trio made a charge for the lead with five laps to go.

The three Ford drivers had fresher tires than the Gibbs quadruplet, which allowed Keselowski’s drafting expertise to come into play. The way the 2012 champ manipulated the air in the final laps of the race was eerily similar to that of the late Dale Earnhardt, whose peers always said that he could see and understand the air when drafting.

Keselowski would use his push from Logano and Harvick to get alongside the JGR stronghold, breaking up the nose-to-tail line by using the sidedraft.

One by one, Team Penske picked off each of the JGR Toyotas until Hamlin was left as the lone sitting duck, without his teammates.

In the unwinnable situation, Hamlin blocked Keselowski up and down the track before the No. 2 Ford got a nose on the inside in Turn 1 on the last lap. This time, Hamlin’s move came too late; the driver of the No. 11 spun, and the loss of momentum for Keselowski was enough to pave the way for Logano’s first Clash win in nine attempts.

Keselowski limped his car to a sixth-place finish and Hamlin was unable to make it back around, finishing in 13th.

This race showed that even when Gibbs’ and Penske’s prize plate drivers take themselves out, there is another one lurking for the win.

Though many eyes will be on Hendrick Motorsports after the organization swept the front row for the Daytona 500 with polesitter Chase Elliott and a returning Dale Earnhardt Jr., the odds are stacked against the lineup that has never looked more vulnerable in plate races.

With that said, the odds of Gibbs and Penske sweeping all of the plate races this season are not good, given the unpredictability of pack racing, but they’re a reliable pick if you’re trying to choose a winner.

Will see how many times a JGR car comes down on a Penske car. They started that garbage again already this year at “The Clash”.