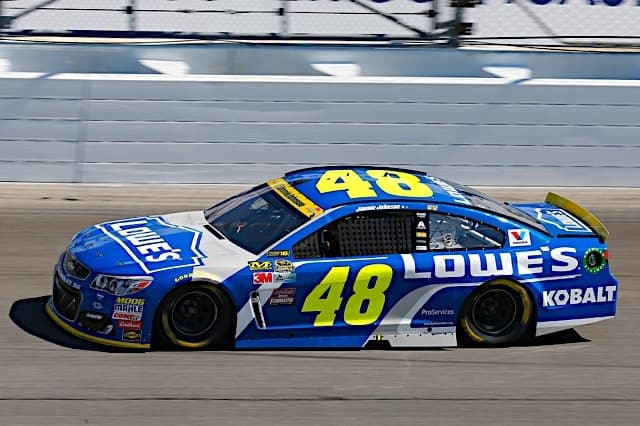 With so many drivers making the Chase, the early races are all about them in the finishing order, but there was one party crasher in the top 10 in the form of Jeff Gordon in the No. 88. Gordon led seven laps late, but needed a late caution that never came to contend for the win.  Nevertheless, Gordon has been out of a racecar for the better part of a year, and he was driving a car built for somebody else whose driving style isn’t all that similar to his own.  Gordon drove a smart, solid race, good enough for a top 10 and to steal a little thunder while he was at it.

When it comes to the Chase, one storyline that has played out again and again is that when so much is at stake, very few teams are willing to mix it up on track.  Teams in the Chase without a round win are more content to take a good points finish if it means advancing than risking going for broke. The drivers not in the Chase will race each other if the opportunity arises, but nobody wants to be “that guy,” so they go easy on the Chasers. Those in the Chase below the cut line might be a little more willing to go for it, along with the drivers with a round win guaranteeing they’ll move on, but that’s six drivers in a field of 40.

13 years into the Chase, it’s doubtful that we’ll ever see another full-season champion, but no Chase format has done what NASCAR hoped for and made everyone race every lap of the season like it’s the last.  It may be win and you’re in, but once you win, it’s test mode until the Chase.  Winning guarantees passage into the next round, but so does avoiding trouble and staying consistent, and wrecking without a win all but guarantees an end to a tile bid, so it’s a no-brainer that drivers will play it safe. No Chase format will change that, so let’s just call it like it is: the Chase is an attempt to be like stick-and-ball sports and not to improve the racing in NASCAR.

Brad Keselowski entered the race as the point leader, and when rain washed out qualifying, that translated into the top starting position.  Keselowski didn’t have a winning car—he led twice for a total of seven laps—but he had a strong enough car to finish fourth.  That’s good enough to easily keep him in the title hunt, and if he keeps up with the consistency he’s shown so far, it could be good enough to carry him through to Homestead…but if the least two years have shown us anything, that won’t be good enough for a second title.

Kevin Harvick won this race a year ago with his back against the wall.  This year, Harvick already had the win to guarantee a spot in the next round of the Chase, and Harvick was lucky that he did, because a broken track bar sent him and his top-5-capable car to the garage early.  Harvick got back on track after repairs, but finished 46 laps down in 37th spot.

How much can a week change things? For Jimmie Johnson, it changed the Chase outlook.  Johnson had a real chance to win at Chicago, only to see it evaporate with a pit road speeding penalty.  Still, Johnson was fast, and he was fast again at Loudon, though not quite fast enough to contend for a win.  He was finding speed at just the right time in the Chase, an it was looking like a seventh title wasn’t out of the realm of possibility.  And then came Dover, Johnson’s best track, the one where he has more wins than any driver in history.  The win and the momentum looked within reach.  But a pit road mistake, this time on the part of his crew, going over the wall too soon, left Johnson a lap down.  Thanks to a 202-lap green-flag run, Johnson managed to finish seventh, but another mistake casts doubt on whether he or his team are really in championship form.

Truex has had dominant races this year (yeah, hi, Coca-Cola 600), but even though he led six times for a race-high 187 of 400 laps, Dover wasn’t really one of them.  When they don’t dominate, though, the No. 78 team has had a knack for being near the front when it really matters—at the end of the day.  This week, Truex took the point from Jeff Gordon with 27 laps to go and from there drive to the win.  Furniture Row Racing looked like a championship caliber team last season, and they backed that up all the way to Homestead before falling short.  This year, they look more and more like a heavy favorite to bring the Cup to roost in Denver.

NASCAR is, at times in a damned-if-you-damned-if-you-don’t situation.  No doubt a lot of fans will voice their ennui after a 202-lap green-flag run at Dover left just six cars on the lead lap by the time the checkered flag flew. The opposite end of the spectrum is the caution clock employed in the Camping World Truck Series which ensures a caution period after 20 minutes if one doesn’t occur on track.  But that has drawn equal ire from fans. So, what other options does NASCAR have? Questionable debris cautions? (Kudos to NASCAR for not throwing one Sunday, because it must have been tempting.) Scheduled competition cautions beyond the early ones we see after rain? There is no easy answer—if NASCAR uses this race as reasoning to institute a caution clock at the Cup level, fans won’t be any happier than they were with the long run.  So what’s left?

I notice that even the manufactured “excitement” of an ‘elimination round’ of the convoluted ‘chase’ can’t fill the stands at Dover. Since None of the top 16 can finish lower than that, and no one out of the top 16 can finish higher than 17th, just where is the motivation to risk tearing up cars or ‘interfering with the chosen few? Only BZF thinks this format is a huge success…I mean HUGE!

Real race fans understand the lunacy of Brian’s desire for for a game 7, bottom of the ninth walk-off win in every race. The problem is that most real race fans (and their kids and grand kids) aren’t watching anymore.

Brian’s attempt to attract new fans has failed miserably. They came, they saw, they left.

Indycar had a great, competitive season without having to resort to any Mickey Mouse chase nonsense. Let Brian have his way. I’ve pretty much stopped watching and going to any Nascar races with the exception of the road races. Its his ball and his game but I don’t have to participate.