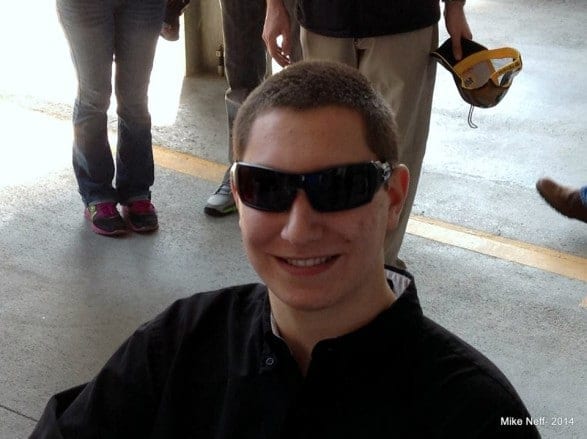 Westborough, MA sits 90 minutes south of Loudon, NH, the site of the inaugural Camping World Truck Series Chase race on Saturday. Though Kaz Grala is not a part of the playoff system, his  career-high seventh-place finish was special, coming at his home track.

Grala has competed in seven races for GMS Racing in 2016. Prior to Saturday, his best finish was eighth, coming at Gateway back in June. Though he has limited experience in the Truck Series, this was one of his career highlights.

“I’m very excited,” Grala told Frontstretch. “The GMS Racing crew got this No. 24 Chevy rolling today and I’m really happy about that. We got behind on track position a little bit in the middle of the race and I think that hurt us a little because I really feel like we had a top five fun. That’s what we’ve got to keep doing, bringing top five trucks and in contention and our luck will come.”

The 17-year-old was the highest finishing GMS Racing truck on the afternoon. He bested his teammates Johnny Sauter and Ben Kennedy, both of whom are in the Chase.

The No. 24 truck began the 175 lap race from ninth, his third best qualifying effort of his brief career. Spending much of the afternoon inside the top 10, Grala had his most consistent race to date.

Grala is unable to compete on tracks bigger than one-mile due to his age. He must wait until next year, factoring in that he turns 18 during the off-season.

Running well at New Hampshire is not abnormal for Grala. In three K&N Pro Series East races at the speedway he had a best finish of third in 2015, adding a 10th-place finish earlier this season.

With key peronsal in attendance, performing well made Grala that much more excited, heading into his last two races of the season at Martinsville and Phoenix.

“It motivated me more than usual,” Grala said. “Getting my best finish so far at my home track is better than anywhere else. It was definitely cool. We had a lot of family, friends and sponsors here, so this was a really good run to have.

In seven races this year Grala has three top 10 finishes. His next Truck Series event will be on Oct. 29 at Martinsville Speedway. In April, he made his series debut at the track finishing 31st.

Heading into 2017 the only event that Grala could confirm is the Snowball Derby in January. As of now he doesn’t know what his NASCAR future holds beyond Phoenix in November.