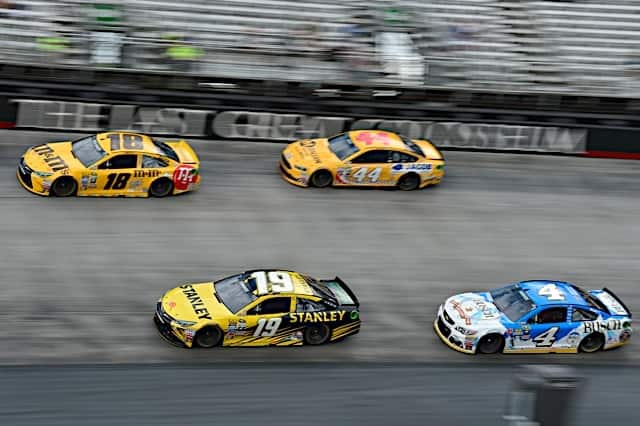 Ricky Stenhouse, Jr. didn’t have the relaxing week off that many other drivers and their families had, instead spending the final off-week of the season saying goodbye to one of his best friends, racer Bryan Clauson, who passed away last weekend from injuries sustained in a racing accident. Stenhouse had his friend’s name over the door, his family in attendance and a replica of his favorite helmet on his head and maybe an angel riding on his shoulder as he drive his way to a career-best second-place finish at a track where he’s always been competitive.

Stenhouse, who has struggled in the Sprint Cup ranks a bit after winning a pair of XFINITY titles, has the best average finish of any active Cup driver at the half-mile track, and he only improved on it this time.  More importantly, the run gave him something to smile about in a week that’s been punctuated by tears.

The racing was pretty great.  Whatever Bristol did to help add the bottom groove back into the mix seemed to work, and ever after the rain, the racing was fantastic, and a lot closer to what most fans expect from Bristol, with plenty of racing action and a few dustups including a 10-car incident that left a lot of tempers simmering.

What wasn’t so great was the television coverage of the race.  It’s not exactly anything new, but even when there’s side-by-side coverage during commercial breaks, shame on NBC for not cutting back to the action when they knew a pass for the lead was imminent.

Sure, fans saw Kevin Harvick pass Kyle Busch for the race lead in the box next to the commercial, but there was no audio or anything else to make fans feel like they were at the track. And when they came back from the commercial break, the reasoning was simply, “As you just saw on the side-by-side…”  That’s just weak.

Where… did the pole-sitter and the defending race winner wind up?

Carl Edwards won the pole, but faded early on, falling to seventh in the first 10 laps.  He rallied mid-race to run in the top 2 for a bit and wound up sixth. While Edwards and his Joe Gibbs Racing teammates had plenty of speed, often appearing to have more than the field, this week, they couldn’t make that speed into results.  Edwards finished sixth, an excellent result, but given JGR’s season dominance, it wasn’t quite where the No. 19 bunch expected to end the weekend.

Joey Logano drove it to Victory Lane a year ago, but he had a bit of a rough road this time around.  He started tenth, but fell back even before getting a piece of a lap 308 accident.  He rebounded in the closing laps and led a total of 38 circuits before finishing tenth.  Like Edwards, Logano certainly didn’t have a bad day, but it wasn’t quite the race expected of the driver, either.

When… did it all go sideways?

It sure seems as though Mother Nature isn’t a race fan.  After rain pushed back the race at Pocono to Monday morning, the Bristol Saturday night race became the Bristol Sunday evening race.  The race itself didn’t appear to suffer too much in that the resin in the lower groove didn’t wash away and there were multiple grooves, but it wasn’t a great experience for fans.  Sure, everybody knows going in that rain delays can happen and they may or may not plan accordingly, but it’s still not fun.

I fear that with the ridiculously late start times NASCAR has pulled out of some dark orifice for next year will make this even worse, because it makes time frames too tight.  Not only does it leave no room to push back for weather (and at the end of the day, the weather dictates when the track is raceable, anyway), but there’s also no room for travel afterward, meaning fans who might have flown or driven home Sunday evening will be forced to be driving home at hours late enough to make doing so risky because of fatigue or having to spend another night at a hotel with hugely over-inflated prices they can’t afford and miss a day of work to boot.  I fear that given these alternatives, many fans will choose to simply stay home.

Why… did Kevin Harvick win the race?

Harvick’s win is an example of everything going right on the day.  His No.4 car didn’t look like a contender on Friday, but a combination of his team making the right changes, Harvick making the right moves, Bristol action reminiscent of the days of yore and no cautions in the closing laps spelled victory for Harvick, his first since Phoenix nearly six months ago. It was the kind of win that’s vintage racing: not dominating, but carefully capitalizing on everything the day brought.

How… about Chris Buescher in the Chase?

Buescher moved into the top 30 in points this week on the strength of a top-5 run at Bristol, and after his win at Pocono, that means Buescher has a provisional Chase spot with 13-point cushion over David Ragan. Buescher, who drives a Roush Fenway-built Ford out of the Front Row Motorsports stable, is the only rookie with a win in 2016.

The twist here is that the points bubble drops another spot, and for now, that means Roush Fenway driver Trevor Bayne is outside the Chase with three races remaining before the playoffs.  It’s been an impressive season in that 12 different drivers have won in 23 races and all of the top 10 have at least one win, with seven having multiple victories.  With three races before the Chase, there are a few drivers without wins who have looked capable of getting one, so unlike in recent years, the field is far from a foregone conclusion even as many spots have been mathematically clinched.

Amy, it is a good point about the later start times affecting fans and their travel plans. NASCAR tried this timing before and it didn’t work well. I know some people will say, well you should plan to take the next day off, but if you have planned for a Saturday night race and travel home on Sunday, it is pretty expensive to change those plans and how many days do you factor in before you just decided it isn’t worth it to go? if you are flying, the airlines change fee is expensive and as you mentioned, if you have to pay another night for a hotel, well, that adds up pretty quickly. I