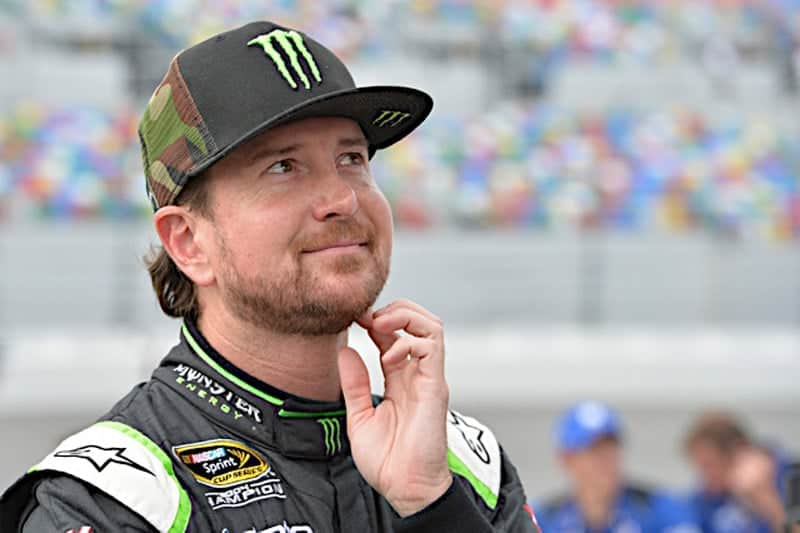 Kurt Busch‘s record streak of races with all laps completed in NASCAR Sprint Cup Series came to a sudden end from the lead at Bristol Motor Speedway.

Running in first the in the middle stages of Sunday’s Bass Pro Shops NRA Night Race, Busch was making his way off of the .533-mile concrete oval when his No. 41 Monster Energy Chevrolet got loose, spurring a crash that took Busch, Matt Kenseth out, while also causing heavy damage for Ryan Blaney, Brad Keselowski, Chase Elliott and Matt Kenseth. Austin Dillon, Paul Menard, Kyle Larson and Brian Scott also got a piece of the incident.

Busch placed the blame on himself after the accident.

“I think I just missed the bottom groove by a few inches, got loose and the wreck was on,” Busch said. “The way that our car was restarting it felt comfortable, it felt good.  That inside with the rosin and the VHT if you don’t hit it exactly right you lose a lot of time.  I tried to make up for it and got loose.  I feel really bad for the Monster Energy guys.  We had a win in our sights and I just drove the car at 101 percent instead of that 99.”

Keselowski and Blaney were left scratching their heads after having nowhere to go during the incident.

“Something happened to the 41 in front of his and he got sideways,” Keselowski said.  I don’t know if he had contact with Joey or if he just got loose, but once he got sideways we were already all kind of digging and I never saw him until I was in his door.  It was a heavy hit.  I hope Kurt’s alright.  I guess maybe I hit him more in the left-rear than the door, but it’s a shame.”

“I don’t know who got loose and slowed everything up, but before I knew it the 20 was sideways,” Blaney said. “He got turned and I didn’t have time to check up and I hit him.”

Kenseth placed the blame for his damage on rookies Elliott and Blaney following the wreck.

“I didn’t really see what happened except for there was cars wrecking up there and I slowed down as much as the guy in front of me,” Kenseth said. “I couldn’t slow down any less than that or I would hit him. Chase (Elliott) bust out of nowhere, ran me over and 21 (Ryan Blaney) came through there wide open – I still don’t know if he’s lifted yet or not – and finished us off. As the wreck happened, you’ve got to slow down. Just not much I could do.”

Keselowski made his way back on-track to improve his position to 32nd after crash. Blaney made laps to move up to 34th, with Kenseth and Busch following in 36th and 37th, respectively.

With the crash, Busch’s record streak of races with all laps completed comes to an end. The Nevada native had completed every lap of the opening 22 races of the season, eclipsing the record 20 races completed by Dale Earnhardt, Jr., in 2012.

“I hate it for my guys,” Busch said. “We’ve completed every lap this year. I put it up on edge to try to win the Bristol Night Race and overstepped the line.”

Wtg Kubu! Great job wiping out both Penske cars in one fell swoop! You auditioning for JGR bro?

If a Penske driver took out those cars the way Yurt did, there would be a social media blowup, drivers foaming at the mouth eagerly waiting to get their digs in post race interviews on national TV, spawning a weeks worth of hate articles. Funny stuff to watch I tell ya. They are all hypocrites. I am sure you saw the fantastic Autotrader vid on Youtube with Brad and Joey goofing on the very thing. It is funny stuff…….

No I haven’t checking it out now…

***technically ALL 3 Penske cars, since the #21 of Blaney & Wood Brothers is Penske affiliated & was totaled as a result of KuBu’s wreck also!

It was awful nice of Elliott to spin Kenseth in front of Blaney. How did he manage to blame Joey for that?

It is the thing to do these days! The truth…we don’t need no stinkin’ truth!!!!