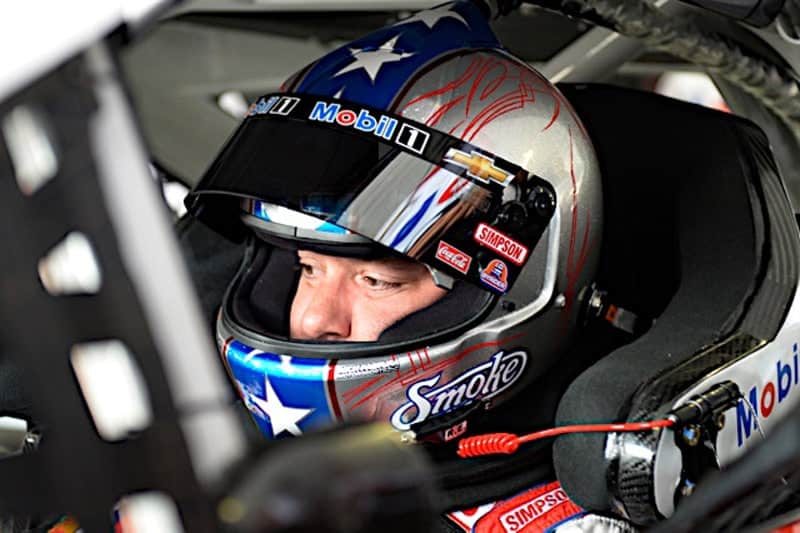 Sprint Cup: Tony Stewart ‘Making Something Out of Nothing’ With Top 5 at The Glen – There’s this saying that Tony Stewart rises like smoke during the slick summer months on the NASCAR schedule.

Well, if this was featured in an episode of Mythbusters, this myth would be officially listed as ‘confirmed.’

After surviving the Watkins Glen craziness in Sunday’s Cheez-It 355, the No. 14 Chevrolet came out of the smoke with a fifth-place finish, his best finish at The Glen since winning back in 2009.

Indeed, for the fourth time in the last five races, Stewart has brought home a top-5 result – something he failed to do in 36 races last season. The hot run of races has slotted Stewart into 26th in points despite missing the opening eight races of 2016.

“That’s what you have to do in the Chase,” he said. “You have to be able to make something out of nothing and these guys are doing a great job at that.” – Zach Catanzareti

XFINITY Series: Armstrong Making Final Push to the Chase – Two weeks ago, Dakoda Armstrong’s chances of reaching the Chase appeared to be dead in the water. Driving for JGL Racing, Armstrong had been able to string together a season’s worth of mid-pack finishes but lacked the speed necessary to close the gap on the Chase cutoff. However, his job got a little bit easier after Iowa last weekend. Armstrong jumped into Joe Gibbs Racing’s No. 18 car and raced to a fifth place finish, allowing him to cut the deficit to 12th place Blake Koch to 26 points.

On Saturday at Watkins Glen, Armstrong was back with JGL. He finished a more typical 18th place but improved to 14th in the points standings. He now trails Koch by only nine points.

Armstrong’s march toward the Chase is coming at just the right time, but can it continue? A crash and poor finish by Koch, more than Armstrong’s performance itself, was primarily responsible for the No. 28 team’s good points day.

Armstrong’s Chase hopes could rest on getting more races with JGR. The original plan was to have Matt Tifft run the next three races in the No. 18 car, but Tifft is still recovering from brain surgery. JGR has not announced a return date for Tifft.

If Armstrong gets another chance to drive for JGR, it could only take one more good race to propel him into a Chase spot. Otherwise, he will have to take a much tougher path to the postseason with the No. 28 team. – Bryan Gable

NHRA: Rain in Seattle? You Don’t Say! – The Protect The Harvest.com Northwest Nationals from Pacific Raceways in Seattle struggled with weather all day but made it all the way to the finals before the rains won out. Finals for the Top Fuel and Funny Car classes will be contested at the next event in Brainerd in two weeks while the Pro Stock final will take place during the U.S. Nationals weekend in Indy over Labor Day weekend.

Antron Brown will face off against Steve Torrence for the Top Fuel trophy while Del Worsham will take on Ron Capps for Funny Car honors. The Pro Stock final will pit Vincent Nobile against Aaron Strong.

Funny Car driver Courtney Force had a crash eerily similar to the one that injured Alexis DeJoria last week when her car lost traction and eventually cut left into the outside wall but fortunately did not suffer any serious injuries. The impact was hard enough to move the concrete barrier. Force immediately got out under her own power but was visibly limping and in pain. She was transported to Valley Medical Center where X-rays and scans came up negative for any broken bones, head injuries, or spinal injuries.

“To hit a concrete guard wall and move it two feet and not break any bones is a testament to their [Simpson Racing] equipment and NHRA safety requirements,” said Force. “Thankfully we have a weekend off. My goal is to get healed up as soon as possible. Luckily we have some time and can get the car fixed up and my own body fixed up. I am looking forward to getting back as fast as I can.” Toni Montgomery

With IndyCar set to return to the Watkins Glen, New York, track in less than a month, Newgarden visited Sunday’s Cheez-It 355 at the Glen to promote the open wheel event and survey the racing surface he’ll compete for victory on in one of the four remaining rounds in the IndyCar tour.

Newgarden also enjoyed the perks of arriving as a guest, spending a large portion of the day with six-time champion Jimmie Johnson and his No. 48 Hendrick Motorsports team.

While NASCAR competed on the shorter, 2.45-mile circuit, Newgarden and the rest of the field will get their shot at WGI’s longer 3.4-mile course when the series returns to New York for the Sept. 4 INDYCAR Grand Prix at The Glen.

Rolled into the glen today to check out the #NASCAR race and promote @indycar coming back to… https://t.co/MfMyqHo6M8

Enjoy the view from the @LowesRacing pit box and the race. pic.twitter.com/mwPFyfx9DP

Great day, thanks for letting us hang. Can't wait to race here with @IndyCar next month! https://t.co/VNh1f2m0vU

On Sunday, the IMSA WeatherTech SportsCar Championship teams competed in the Continental Tire Road Race Showcase at Road America in Wisconsin. For the most part, it was a relatively staid affair. That is, until Renger van der Zande and Stephen Simpson collided and ended up in the trap at the Carousel while fighting for second in Prototype Challenge. The incident brought out the yellow and bunched everyone up.

The green flag came out with five minutes to go, ensuring a three-lap dash to the finish with all four classes still in play. Action Express Racing fought amongst themselves and ended up with another overall 1-2, their third in a row dating back to June. With his two main competitors eliminating themselves, Tom Kimber-Smith won Prototype Challenge for PR1/Mathiasen Motorsports. GT Daytona saw Jeroen Bleekemolen hold off Park Place Motorsports’ Jörg Bergmeister for the victory in a close finish.

Then, you had GT Le Mans. Richard Westbrook led on the restart in the No. 67 Ford with Risi Competizione’s Toni Vilander hot on his tail. Porsche North America’s Patrick Pilet saw a hole and went for it in turn 5. He went in way too hard, hit Westbrook and wrecked himself. Pilet ended up seventh. Vilander was then all over Westbrook for a full lap. However, he was hit from behind by the No. 55 Mazda Prototype driven by Tristan Nunez and spun on the second-to-last lap in turn 1. Vilander did not hit anything and continued on to finish fifth in class.

These incidents boosted Tommy Milner in the Corvette Racing No. 4 into second with more pace than Westbrook. With the help of the draft, Milner was able to draft past on the run to turn 5 on the last lap of the race to take the lead. From there, Milner took a great victory for Corvette Racing. It was a great race to watch. IMSA will have the race uploaded on YouTube fairly soon, so you’ll be able to see the action in all its glory. – Phil Allaway

Why the BFD on Stewart? Did I read that Danica led 11 laps…what that is almost 27 miles on beating us on our daily commute. Why no mention? Was it under caution, surprised there isn’t a ticker tape parade. Hey if true give credit where due, that hasn’t happened ever if memory serves. So far nothing has gone out on the world wide newswire. Guess the hype is off the rose. and it is like crying wolf…the media cried her greatness for so long. She actually seems like she did something and crickets at least in the print media so far. Just asking and wondering. :)