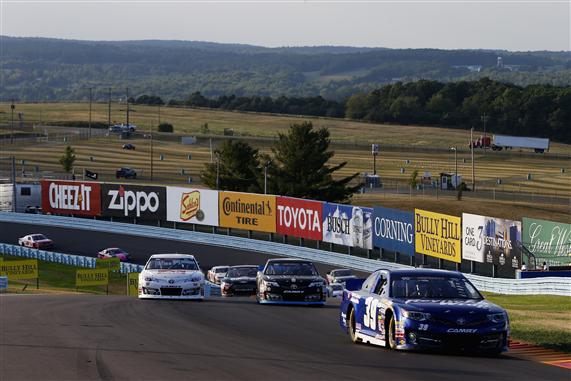 For the past five or so years, Watkins Glen International has put on some of the best races of the season in both the Sprint Cup Series and the XFINITY Series.

Sitting on Seneca Lake, the famed road course was voted by race fans to be the best NASCAR venue in 2015 in a USA Today poll. The fans from the Finger Lake region have upped the ante, as the track has seen a steep incline in attendance over the past five years.

In 2015, there was a sold out grandstand for the first time in 28 years. This was brought to the attention of Watkins Glen International president Michael Printup and he is continuing the legacy of the historic venue.

“Our team puts together a great race first of all,” Printup told Frontstretch in an exclusive interview. “They know how to do it from all the elements from media to corporate partners. The team works really hard in doing that. A large component is our corporate sponsors, but also the driving. The driving has been the best in the country.”

Of the two road course races in the Cup Series each year, the Glen is the more high speed, aerodynamic race track. Throughout the garage, it’s close to a split decision on which of the two they prefer.

However, Printup believes that the fans are a huge part to the success of getting WGI back on the map. About a decade ago, it was just another track on the schedule. Now, it has become a phenomenon.

“We’ve had the best races,” Printup said. “Sonoma proved it again with the road course with Tony’s [Stewart] last lap pass. That’s us every year, but we have 20, 30, 40 laps of excitement. We’re a higher speed road course than them. It’s really the excitement on the track with everything from the concerts to fan displays to the autograph sessions.”

During a race weekend, WGI puts on an XFINITY Series autograph session open to the public. It also has as much if not more driver appearances throughout the weekend including “The Bog.”

The large infield inside the 2.45-mile road course has rocked the house down as each year more campsites are added … and they sell out. It’s a way of living for the fans.

“There’s a sense of family,” Nick Czerow, a NASCAR fan said. “When you talk about racing and family, you see it here more than other

tracks. I’ve been to the Coca-Cole 600 and that doesn’t even compare here to what you see with the amount of campers. There’s also a level of creativity and showmanship that goes into this. You want to see who has the coolest bar, the different school buses and what they’ve done to the inside of them.”

NASCAR fans are unique, probably more unique than any other sport. It’s hell or high water if their driver doesn’t perform at the race track.

As WGI continues to make changes and improve their facility, more fans come out to the small town with a population of 1,883 people. In 2015, the track held close to 100,000 people, over 100 times the amount of people the town typically holds.

Other tracks on the circuit such as Indianapolis Motor Speedway are struggling to put fans in seats due to the lack of racing as well as how warm the temperature are in the heart of summer. Being in the north, Watkins Glen doesn’t have that problem as the racing is exciting and the drivers are beating and banging on the track.

The term “rubbin’s racing” comes into effect at WGI. The tight right-hand corners are hard to race through without making contact. Rivalries have sparked at this track as recently as last year when Regan Smith went after Ty Dillon. In 2007, it was Juan Pablo Montoya and Kevin Harvick going at it.

“I’ve been coming here since 2007,” Brandon Scott of Corning said. “I like to meet the drivers, especially the ones coming through the ranks. It’s a beautiful area. I love coming here and spending time with family watching a sport we love.”

1957 was the first time that NASCAR took to the famous road course. That year it was won by Buck Baker, just beating out Fireball Roberts. 58 years later, it was Joey Logano edging out Harvick as the No. 4 car ran out of gas on the last lap.

The excitement is what keeps the fans coming back.

“We’re world renowned and the team that built this race track 60 plus years ago, boy I hope they knew what they were doing because boy they did an awesome job,” Printup said. “We just have to maintain it and grow it and that’s our job.”