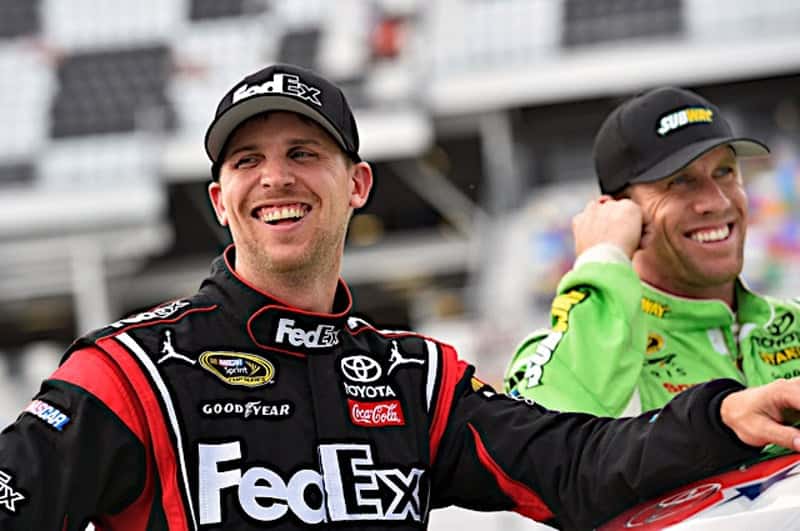 Denny Hamlin may be the only one exiting Watkins Glen International with happy thoughts, as he survived the late ruckus to take the victory in Sunday’s Cheez-It 355.

Grabbing the lead by passing Kyle Busch and Brad Keselowski, who both slid wide in turn one following a restart with 10 laps to go, Hamlin held off a hard-charging Martin Truex, Jr. to grab his first win on a road course and second of 2016.

“It was an eventful race but uneventful for us,” Hamlin said. “I think just being a little defensive on those final couple laps, making sure I didn’t pull a Sonoma. I could see in my mirror when a car is close and I could see Martin shoot to the right after [Turn] 6. I knew my position was then to block and force him to make a very aggressive move.”

While Hamlin cruised to victory, it was contact between second-place Truex and third-place Keselowski that sparked a bit more interest. After the No. 78 spun off the front bumper of Keselowski, the cool-down lap featured a few door slams traded back and forth before they returned to pit road, where Keselowski apologized for the contact.

Despite the instant apology, however, it didn’t mean much to a sizzled Truex.

“Hell no it don’t help,” Truex exclaimed. “What do I get out of it? I don’t run over people all the time, I don’t pull out in front of people during qualifying. Race me like I race you is all I ask.”

Truex was not the only driver in trouble coming to the checkered flag, as Kyle Larson crashed hard into the pit road entry after a bump from AJ Allmendinger.

Long before the last-corner drama, the whole 90-lap race seemed to showcase hot tempers and carnage, as two red-flag periods paused the event for almost a combined half-hour.

The first occurred on lap when Ricky Stenhouse, Jr. careened into the backstretch wall before getting slammed by Jimmie Johnson. Greg Biffle was also involved, saying he was “trying to be safe” while going through the wreck.

“I just got run over from behind,” Biffle said. “I got hit by two or three guys from behind. It’s hard to see in that area.”

The second red flag with seven laps to go, swallowed up Kevin Harvick, David Ragan and Chris Buescher, the Pocono winner who is chasing Ragan for the 30th spot in points in order to be Chase eligible.

Buescher expressed frustration after officials did not help back him up after he got stuck in the mud.

“I was trying to get pushed off so we could get back around,” he said. “I had to get out. We got back on track and took the green.”

Sitting now three points behind the cutoff zone, Buescher says it was a small positive step forward in the big picture.

“Grand scheme of things, from the points standpoint, it was a little bit of a gain,” he said. “We definitely don’t want to do it like that anymore.”

Making some gains in the final corner was Joey Logano, who avoided damage to steal second spot behind Hamlin.

“Typical Watkins Glen,” said Logano. “It’s just awesome. Crazy racing, full contact. A lot of fun from the driver’s seat. We got ourselves in position to win the race but I didn’t have the speed in the racecar to make it happen.”

Completing the top five was Allmendinger, one of the favorites heading into the weekend’s race.

Tony Stewart grabbed his fourth top five in the last five races in the fifth position.

“It wasn’t pretty,” Stewart said. “Had some problems with the brakes getting hot in the first run. We stuck to our strategy  – I am some impressed with ‘Buga’ [crew chief, Mike Bugarewicz]. He’s so good at figuring out the strategy.”

Casey Mears ties his season-best finish in 12th, while Michael McDowell finished 17th, his best non-plate result of the season in his 200th career start.

Looks like it’s not the driver of the 23. It’s the car. Maybe it’s Brian’s version of Christine.